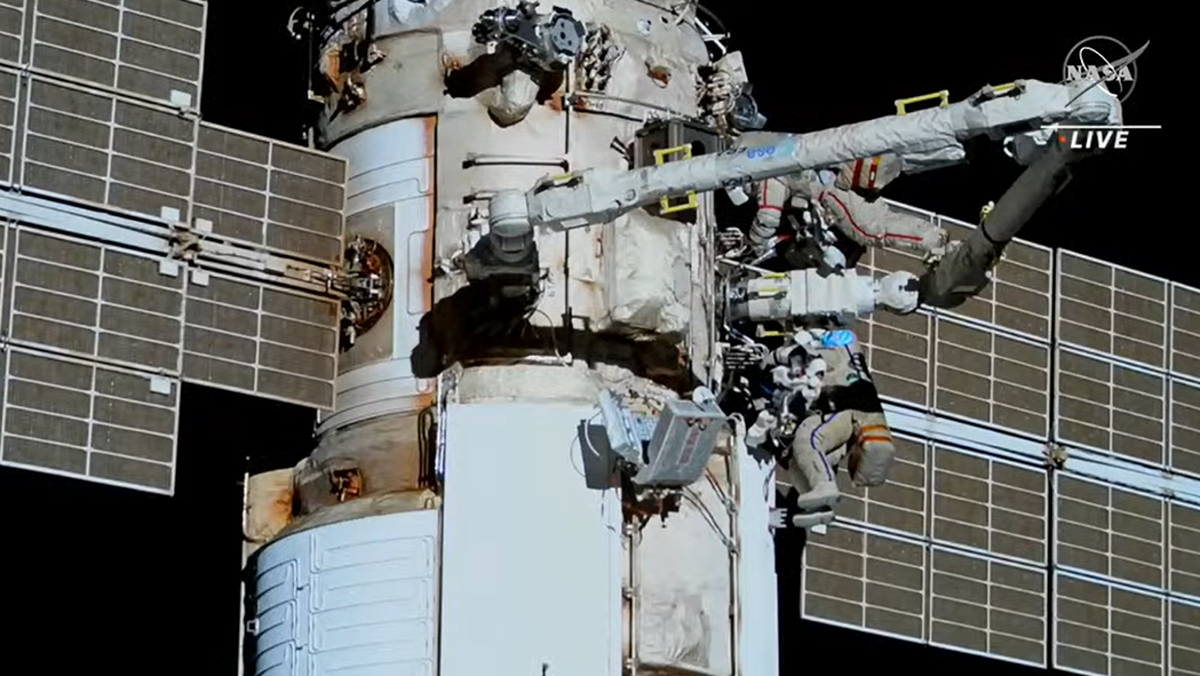 Two cosmonauts bounced back into action Friday (Sept. 2), more than making up for a spacewalk cut short two weeks ago.

“You completed more than you set out to do! Very productive,” a representative from Moscow Mission Control told the cosmonauts just after they closed the hatch. (The transmission was in Russian; interpretation was available in English on NASA Television.)

Working as much as one hour, 10 minutes ahead of timeline, Artemyev and Matveev finished numerous tasks to configure the European Robotic Arm, and finished a get-ahead task to extend the long Strela boom crane between the Poisk and FGB modules on the orbiting complex’s Russian side.

“These booms have a lot of inertia,” one of the spacewalkers commented mid-extension.

In pictures: The most memorable spacewalks in history

Artemyev and Matveev had to head back to the airlock early on Aug. 17 after one of the Orlan spacesuits experienced a battery problem. (NASA did not disclose how Roscosmos assessed the issue or decided to proceed with spacewalks; the spacesuits had no power problems this time around.)

The ticked through remaining tasks quickly on today’s excursion, including installing a work platform on the Nauka module, configuring a control panel and the arm’s grasping “end effector”, and maneuvering some insulation between locations, among other tasks.

Besides the boom extension, a key spacewalk objective was met when the spacewalkers successfully tested a mechanism meant to help the arm grasp payloads of more than nine tons in space.

The cosmonauts also had a few moments to take in the view of Earth, including witnessing devastating wildfires and smoke over California. “You can see those forest fires. That is impressive,” one of the spacewalkers commented shortly before 11:20 a.m. EDT (1520 GMT), during the extra-vehicular activity’s second hour.

On their previous excursion on Aug. 17, lasting 2.5 hours, the duo did complete enough work on for European controllers to do first motion on the arm on Aug. 24.

“This first motion involved unleashing the payload — a single pin latch and its adapter for the cosmonaut support tool — from Nauka, moving it to the other side of the module and then installing it back to the original position,” European Space Agency officials stated (opens in new tab). (Nauka is the Russian module that the arm launched to space with in July 2021.)

The arm moved a payload about the size of a small suitcase during the test, but when fully ready it will be able to heft payloads with a mass of nearly 9 tons. Controllers plan a more ambitious arm test in mid-September to assess the brakes, joint motion, force control and camera image quality.

Friday’s spacewalk was the eighth spacewalk for Artemyev and the fourth for Matveev, NASA stated. It also was the eighth at the ISS in 2022 and the 253rd supporting its assembly and maintenance since 1998, based on data from previous spacewalks.

SU(N) Matter Is About 3 Billion Times Colder Than Deep…

NASA’s Juno probe snaps a photo of Jupiter revealing its…