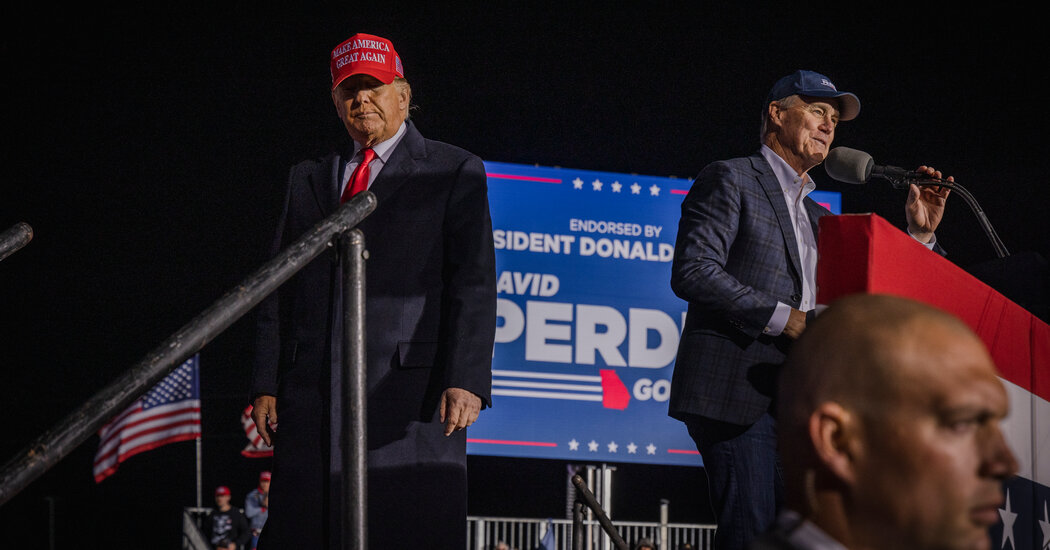 With many of Donald J. Trump’s endorsed candidates falling to defeat in recent primaries, some Republicans see an opening for a post-Trump candidate in 2024.

Donald J. Trump had cast this year’s primaries as a moment to measure his power, endorsing candidates by the dozen as he sought to maintain an imprint on his party unlike any other past president.

But after the first phase of the primary season concluded on Tuesday, a month in which a quarter of America’s states cast their ballots, the verdict has been clear: Mr. Trump’s aura of untouchability in Republican politics has been punctured.

In more than five years — from when he became president in January 2017 until May 2022 — Mr. Trump had only ever seen voters reject a half-dozen of his choices in Republican primaries. But by the end of this month, that figure had more than doubled, with his biggest defeat coming on Tuesday when Gov. Brian Kemp of Georgia thrashed a Trump-backed challenger by more than 50 percentage points. Three other Trump recruits challenging Kemp allies also went down to defeat.

The mounting losses have emboldened Mr. Trump’s rivals inside the party to an extent not seen since early 2016 and increased the chances that, should he run again in 2024, he would face serious competition.

“I think a non-Trump with an organized campaign would have a chance,” said Jack Kingston, a former Georgia congressman who advised the first Trump presidential campaign.

Mr. Trump remains broadly popular among Republicans and has a political war chest well north of $100 million. But there has been a less visible sign of slippage: Mr. Trump’s vaunted digital fund-raising machine has begun to slow. An analysis by The New York Times shows that his average daily online contributions have declined every month for the last seven months that federal data is available.

Mr. Trump has gone from raising an average of $324,633 per day in September 2021 on WinRed, the Republican donation-processing portal, to $202,185 in March 2022 — even as he has ramped up his political activities and profile.

Those close to Mr. Trump — and even Republicans who aren’t — caution against misreading the significance of primary losses in which he himself was not on the ballot. Mr. Kemp, for instance, took pains ​​not to say a cross word about the former president to avoid alienating his loyal base.

“To be the man, you have to beat the man,” said Jim Hobart, a Republican pollster with Public Opinion Strategies. “And until Trump either bows out of electoral politics, or is beaten by a Republican at the ballot box, his strength remains.”

Rivals, including his own former vice president, Mike Pence, are gearing up for potential presidential runs, as he and others visit key early states like Iowa and ramp up their own fund-raising operations. Gov. Ron DeSantis of Florida has amassed a $100 million re-election war chest and is the talk of many donors, activists and voters interested in the future of Trumpism without Trump.

“Donald Trump had four good years,” said Cole Muzio, president of the Frontline Policy Council, a conservative Christian group based in Georgia, who voted twice for Mr. Trump but is now looking for someone more “forward-looking.”

“DeSantis is great about seeing where the left is going and playing on the field that they’re going to be on, rather than reacting to what happened a couple of years ago,” Mr. Muzio said, echoing the frustration that Mr. Trump continues to obsess about denying his 2020 election loss.

After the Georgia Primary Election

The May 24 races were among the most consequential so far of the 2022 midterm cycle.

Mr. Muzio, whose organization is hosting former Secretary of State Mike Pompeo as its fall gala headliner, spoke as he waited to hear Mr. Pence this week in Kennesaw, Ga., at a rally for Mr. Kemp — all names he included in the party’s “deep bench” of 2024 alternatives.

Mr. Trump still remains the most coveted endorsement in his party, and he has boosted some big winners. Sarah Huckabee Sanders in Arkansas virtually cleared the field for governor with his support, and Representative Ted Budd in North Carolina defeated a past governor to win his party’s Senate nomination.

Yet the difficult primary season has added to Mr. Trump’s personal anxieties about his standing, after he has sought to fashion himself as something of an old-school party boss in his post-presidency. He has told advisers he wants to declare his candidacy or possibly launch an exploratory committee this summer.

Most of Mr. Trump’s advisers believe he should wait until after the midterm elections to announce a candidacy. Yet the sense among Republicans that Mr. Trump has lost political altitude is taking hold, including among some of those close to him.

Taylor Budowich, a Trump spokesman, said the “undeniable reality” is that Republicans rely on Mr. Trump to “fuel Republican victories in 2022 and beyond.”

Some Republican strategists have fixated on the fact that so many of Mr. Trump’s endorsees have landed about one-third of the vote — big winners (J.D. Vance in Ohio), losers (Jody Hice in Georgia, Janice McGeachin in Idaho and Charles Herbster in Nebraska) and those headed for a recount (Dr. Mehmet Oz in Pennsylvania).

One-third of the party is at once an unmatched base of unbending loyalists — and yet a cohort far from a majority.

Notably, Mr. Trump’s share of what is raised overall among all Republicans online has also declined. Mr. Trump’s main fund-raising committee accounted for 19.7 percent of what was raised by Republican campaigns and committees on WinRed in the last four months of 2021, but just 14.1 percent of what was raised during the first three months of 2022. Some of that decrease is the result of other candidates on the ballot raising more this year.

Still, only 10 times since July 2021 has Mr. Trump’s committee accounted for less than 10 percent of the money raised on WinRed during a single day — and nine of those instances came in March 2022, the last month data was available.

The vocal opposition is no longer just confined to anti-Trump forces inside the party but is also evident in the pro-Trump mainstream. When a triumphant Mr. Kemp, whom Mr. Trump had targeted because he refused to go along with his efforts to subvert the 2020 presidential election, arrived in Nashville on Thursday to speak before a gathering of the Republican Governors Association, he received a standing ovation.

“There is this temptation to engage in wish-casting in which, ‘This is the moment in which Trump is slipping!’” said Charlie Sykes, a conservative anti-Trump commentator. “On the other hand, what happened in Georgia was significant. He drew a bright red line — and voters just stampeded across it.”

Why are these midterms so important? This year’s races could tip the balance of power in Congress to Republicans, hobbling President Biden’s agenda for the second half of his term. They will also test former President Donald J. Trump’s role as a G.O.P. kingmaker. Here’s what to know:

What are the midterm elections? Midterms take place two years after a presidential election, at the midpoint of a presidential term — hence the name. This year, a lot of seats are up for grabs, including all 435 House seats, 35 of the 100 Senate seats and 36 of 50 governorships.

What do the midterms mean for Biden? With slim majorities in Congress, Democrats have struggled to pass Mr. Biden’s agenda. Republican control of the House or Senate would make the president’s legislative goals a near-impossibility.

What are the races to watch? Only a handful of seats will determine if Democrats maintain control of the House over Republicans, and a single state could shift power in the 50-50 Senate. Here are 10 races to watch in the House and Senate, as well as several key governor’s contests.

When are the key races taking place? The primary gauntlet is already underway. Closely watched races in Pennsylvania, North Carolina and Georgia will be held in May, with more taking place through the summer. Primaries run until September before the general election on Nov. 8.

Go deeper. What is redistricting and how does it affect the midterm elections? How does polling work? How do you register to vote? We’ve got more answers to your pressing midterm questions here.

Mr. Sykes said the current G.O.P. very much remains “Trump’s party,” even as he saw a distinction developing “between Trumpism and Donald Trump himself.” The critical question, as he put it, is whether Republican voters are in a “let’s give him the gold watch and let’s move on” mood.

Mr. Pence, whom Mr. Trump publicly condemned as rioters swarmed the Capitol during the certification of the 2020 Electoral College vote, has made travels to early states. A favorite of evangelical voters, he has sought to highlight his support for ending abortion rights as the Supreme Court prepares for a possible decision undoing the landmark Roe v. Wade ruling.

Senator Tom Cotton of Arkansas, a Republican who has been a hawk on immigration and China since before the Trump presidency, has positioned himself as a potential heir to Trumpism. Mr. Cotton has also drawn a contrast with Mr. Trump from the right, vocally criticizing the First Step Act — a criminal justice reform bill that the former president signed into law — as a liberal law.

Mr. Scott has said that this will be his last term in the Senate. But he continues to pad a $23.4 million campaign treasury despite facing only token opposition. Mr. Scott has more than 1,000 times as much as his closest rival, a Democrat with $23,199.

Even some Trump allies, like the right-wing media host Stephen K. Bannon, speak for a swath of one-time Trump voters when they condemn the coronavirus vaccines that Mr. Trump championed while president.

Yet if the primaries in May showed the bounds of Mr. Trump’s personal influence, they also made clear that his election-denialism movement has permeated the party. In Pennsylvania, Doug Mastriano, a leading voice against certifying the 2020 election, won the primary for governor in a landslide last week — even as the party’s old guard warned that he was too extreme to win in November.

Numerous Republican strategists have argued that Mr. Trump’s continued obsession with the 2020 election is an unwanted distraction in 2022, when Democrats hold the levers of power in Washington and polls show most of the country feels like the nation is moving in the wrong direction.

“The resounding message from the Republican voters in Georgia is: Quit talking about 2020,” Senator Mitch McConnell, the Republican minority leader, told Politico. “And make the fall election about the future and about the Biden administration.”

In interviews with Republican voters at Kemp events, few had become anti-Trump. “We had a great four years with him: The economy was great, jobs were great, everything was great,” said Belinda Fickes, 49, a cafeteria manager outside of Atlanta.

But Ms. Fickes, who voted twice for Mr. Trump, is looking elsewhere in 2024. She lives in Cobb County, a suburban area that swung sharply away from Republicans in the Trump years. Hillary Clinton carried it by fewer than 8,000 votes in 2016; President Biden won it by more than 55,000 votes, far more than his winning margin in the state.

“He’s so polarizing,” Ms. Fickes said of Mr. Trump, “and that’s the problem.”

Government ‘pushing universities out of teacher training’ over leftwing politics

Vice President Harris: The US is “experiencing an epidemic of…