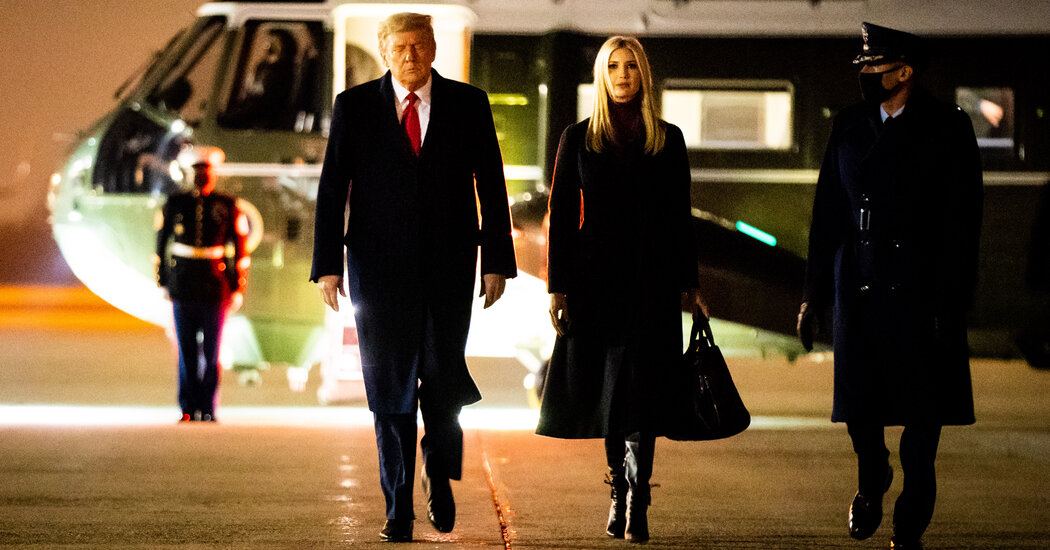 The former president, responding to videotaped testimony played at the Jan. 6 hearing, said Ivanka Trump had been “checked out” and was not involved in studying the election results.

WASHINGTON — Former President Donald J. Trump, long known for distancing himself from or tossing aside staff members who contradicted him while he was in the White House, discovered a new target on Friday: his elder daughter.

The morning after the House committee investigating the Jan. 6 attack on the Capitol played recorded video testimony of his daughter, Ivanka Trump, at its prime-time public hearing, Mr. Trump used his social media website to separate himself from what she had said and to say she was “checked out” during the final days of his administration.

In the testimony, Ms. Trump said she was influenced by a Dec. 1, 2020, statement by William P. Barr, then the attorney general, that there was no widespread fraud that had altered the outcome of the election. She testified that she respected Mr. Barr and “accepted what he was saying.”

“Ivanka Trump was not involved in looking at, or studying, Election results,” Mr. Trump wrote on his social media website, Truth Social, in one of eight messages he posted there in response to the hearing. “She had long since checked out and was, in my opinion, only trying to be respectful to Bill Barr and his position as Attorney General (he sucked!).”

Ms. Trump was a senior adviser in the White House, and she continued to work in the administration until the end. Her colleagues have recalled her being among those urging White House staff members on election night to “fight” even as it became clear that her father would most likely lose. Her husband, Jared Kushner, who was also a senior adviser in the White House, attended several meetings about postelection strategy with a range of political and West Wing advisers, as well as lawyers like Rudolph W. Giuliani.

Pushing back on his daughter’s comments was only one way in which Mr. Trump assailed the hearing, the first in a series of sessions to be held by the House committee this month.

He denied having responded approvingly to the “Hang Mike Pence!” chants bellowed about the vice president by some of the rioters at the Capitol on Jan. 6, an account shared during the hearing by Representative Liz Cheney, Republican of Wyoming and the panel’s vice chairwoman.

“I NEVER said, or even thought of saying, ‘Hang Mike Pence,’” Mr. Trump wrote on the social media site. “This is either a made up story by somebody looking to become a star, or FAKE NEWS!”

Ms. Cheney did not say he had used those words, but she quoted testimony that Mr. Trump had responded to the chants by saying that “maybe our supporters have the right idea” and that Mr. Pence “deserves it.”

In another post on the site, Mr. Trump described the committee as a “totally partisan, POLITICAL WITCH HUNT!” And in two other posts, he attacked Mr. Barr, calling him a “coward,” “weak and frightened,” “stupid” and “scared stiff of being impeached.”

The strawberry supermoon will brighten skies this week