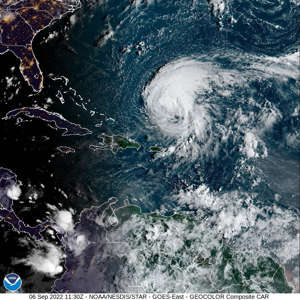 © UPI Tropical Storm Earl is seen in the Caribbean early Tuesday. Forecasters said they expect the storm to strengthen and become a hurricane in the coming days. Image courtesy NOAA/NHC


Sept. 6 (UPI) — Forecasters expect that Tropical Storm Earl will strengthen and become a hurricane within the next few days, but at the moment it’s not expected to make landfall anywhere on the U.S. East Coast.

Earl formed in the Caribbean over the weekend and became the fifth named storm of the 2022 Atlantic hurricane season, following Alex, Bonnie, Colin and Danielle.

The National Hurricane Center said in its 5 a.m. EDT update on Tuesday that the storm was located 345 miles north of Saint Thomas and 615 miles south of Bermuda. It had maximum sustained winds of 65 mph and was moving northward at 7 mph.

A storm becomes a hurricane when sustained winds reach 74 mph.

“A slow northward to north-northwestward motion is expected to continue through Wednesday,” the NHC said in its update. “A faster motion toward the north-northeast and northeast is expected Wednesday night through Thursday night.”

The center said the storm was a bit “disheveled” early on Tuesday, but is still expected to gain hurricane strength.

Danielle and Earl came after a highly unusual August, during which there were zero named tropical systems. While not unprecedented, it was the first time in 25 years that August came and went without a named tropical storm in the Atlantic basin.

The 2022 season has so far been substantially different than the hyperactive seasons in 2020 and 2021.

Accuweather meteorologists expect there will still be 16 named storms before the hurricane season ends on Nov. 30. They expect between six and eight will become hurricanes.

“Our thinking has not changed as far as 2022 still being an active season,” AccuWeather hurricane Expert Dan Kottlowski said last month. “Our biggest concern is for a high chance for high-impact hurricanes.”