The Politics of Abortion

Polls show that support for abortion rights is rising. Will that help Democrats this fall?

Regular readers of this newsletter may remember the thermostat theory of politics. It’s the idea, developed by the political scientist Christopher Wlezien, that public opinion often moves in the opposite direction as government policy.

When policy begins changing, many people worry that the shift will be too radical, and their views move the other way — much as a thermostat regulates a house’s temperature. During Donald Trump’s presidency, public attitudes moved left on immigration. During Barack Obama’s presidency, attitudes moved right on gun control and taxes.

Abortion policy now seems to be offering the latest example of the theory. As more states have enacted laws restricting abortion in the past few years, support for abortion access has risen. It may have risen even more in the past few weeks, with the Supreme Court potentially on the verge of overturning Roe v. Wade.

Shortly after Politico reported in May that the court had tentatively decided to overturn Roe, a University of Chicago research group conducted a poll for The Wall Street Journal, asking about Americans’ attitudes toward abortion. The poll is especially useful because it has been asking the same questions since the 1970s. Last month, it found that 57 percent of Americans said they favored legal abortion if a woman wanted one for any reason, up from 54 percent last year and only 44 percent in 2016. 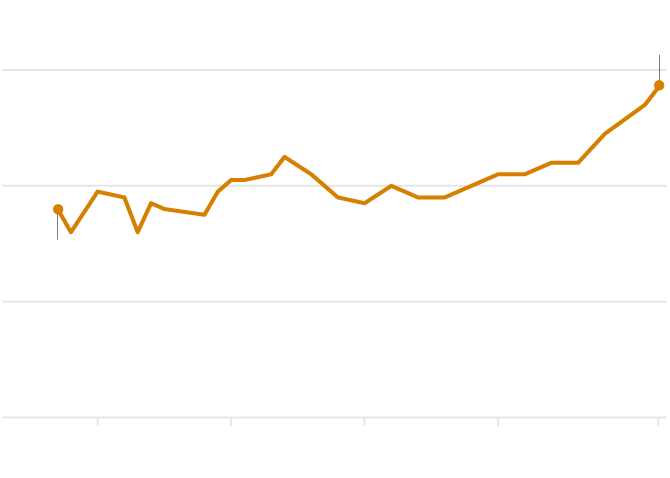 Polls by the Pew Research Center and NBC News have also found rising support for abortion access in the past few years. These increases fit a historical pattern, noted Andrew Beveridge, a co-founder of Social Explorer, a demographic research tool. As you can see in the chart above, support for abortion also rose in the late 1980s and early 1990s, after two Supreme Court decisions that allowed states to impose more restrictions.

With the country possibly on the verge of its biggest change in abortion policy since the 1970s, many Democrats see a major political opportunity. They think the court’s decision — if, in fact, it overturns Roe, which remains uncertain — can help the party do better in this year’s midterms than many analysts have been predicting. In the long term, Democrats hope that they can channel public opinion to enshrine abortion access into law.

“You have a right that is wildly popular with the electorate, and you have an electorate that has not really grappled with the fact that it could be taken away,” Jessica Floyd, president of American Bridge, a Democratic political action committee, told Reuters. “The dynamic here is fairly unprecedented.”

In a Times Opinion essay, Josh Marshall argued that Democratic candidates would help themselves by signing a pledge promising both to protect abortion rights and to break a filibuster to do so.

Democrats may be right about the power of abortion this year. As Floyd noted, the political environment seems to be unprecedented, which introduces significant uncertainty.

But there are also at least three reasons to wonder whether abortion will prove to be as potent as Democrats think.

First, the recent Wall Street Journal poll suggesting that most Americans oppose any abortion restrictions may be an outlier. For years, other polls have repeatedly shown that a majority of people — women and men — support abortion access in many cases but also want significant restrictions (such as after the first trimester).

As a recent Pew report put it, “Relatively few Americans on either side of the debate take an absolutist view on the legality of abortion — either supporting or opposing it at all times, regardless of circumstances.” The Democratic Party’s position is near one end of that spectrum, which can make it harder for the party to win over swing voters on the issue.

Second, the politics of gender identity are dividing Democrats, which may make it harder for them to agree on a clear message. Historically, Democrats have described abortion access as a matter of women’s equality. But some progressives now oppose using the word “women” when talking about abortion, because a small percentage of pregnant people are transgender men.

My colleague Michael Powell described this debate in The Times last week, and he quoted some experts who argued that language like “pregnant people” alienated many people. “Activists are adopting symbols and language that are off-putting not just to the right but to people in the center and even liberals,” Steven Greene of North Carolina State University said.

Third, abortion may not be the main issue on most voters’ minds, even if the Supreme Court overrules Roe. “It is a very huge issue for the base of the party,” Chuck Rocha, a Democratic strategist and former union organizer, told Politico. “But it doesn’t have the same sway as we think it does.” That may be especially true when inflation is high and President Biden’s approval rating is low.

Mark Murray of NBC News recently summarized both sides of the dynamic:

Support for abortion rights has reached a record high, and nearly two-thirds of Americans oppose the U.S. Supreme Court overturning Roe v. Wade, according to a new national NBC News poll conducted after the leak of a draft opinion that would strike down the constitutional right to abortion …

For years, many Americans have been willing to vote for candidates who have different abortion views than the voters themselves do. Perhaps that dynamic will continue in 2022. Or perhaps the Supreme Court will focus people’s attention on the issue in a way that has not previously been the case. “We’ve never been in a situation like this,” Christine Matthews, a pollster who has worked for Republicans, told The Times.

Programming note: I’ll be on break for the next two weeks. My colleagues will deliver The Morning to your inboxes during that time. I’ll be back Tuesday, June 28. — David

Students across the U.S. wrote in about their fears around school shootings.

Gail Collins and Bret Stephens discuss how Biden can lift his approval rating.

Photo shoot: Dress up your apartment, then rent it out by the hour.

The truth is out there: Do you remember who made crop circles?

Quiz time: The average score on our latest news quiz was 8.5. Can you beat it?

Metropolitan Diary: A lovely subway encounter, a parrot with a Brooklyn accent and more tales from the city.

A Times classic: The case for intermittent fasting.

Lives Lived: Alexander Nikitin took on a 10-year-old Garry Kasparov as a student. By the time Kasparov was 17, Nikitin had helped him become a chess grandmaster. Nikitin died at 87.

The Tony Awards were last night, celebrating Broadway’s return and honoring the season’s plays and musicals.

Best musical: “A Strange Loop,” a meta-musical about an aspiring theater writer who is Black and gay, and whose self-critical inner dialogue springs to life in the show.

Best play: “The Lehman Trilogy,” which our critic called “a riveting history lesson” about the rise and fall of the Lehman Brothers financial empire.

Best actress in a play: Deirdre O’Connell for “Dana H.,” in which she lip-syncs the testimony of a woman abducted by a white supremacist.

More: Jennifer Hudson became an EGOT winner. And here’s a full list, and a recap.

This potato chip omelet is a study in simplicity. Eggs, salted potato chips and olive oil are all you need.

To better understand disinformation, read these books about its history, techniques and effects.

The pangrams from yesterday’s Spelling Bee were ethanol and nonlethal. Here is today’s puzzle.

And here’s today’s Wordle. After, use our bot to get better.

Thanks for spending part of your morning with The Times. See you tomorrow.

P.S. The Times’s Video team won two Peabody Awards for its coverage of Jan. 6 and the war in Gaza.

“The Daily” is about the war in Ukraine. On “Sway,” can Silicon Valley save the planet?

Claire Moses, Ian Prasad Philbrick, Tom Wright-Piersanti and Ashley Wu contributed to The Morning. You can reach the team at themorning@nytimes.com.

Sign up here to get this newsletter in your inbox.

Jupiter’s icy moon Europa will block out a star for…