The Jan. 6 Inquiry’s Only Endangered Democrat Prepares Herself for a Fight 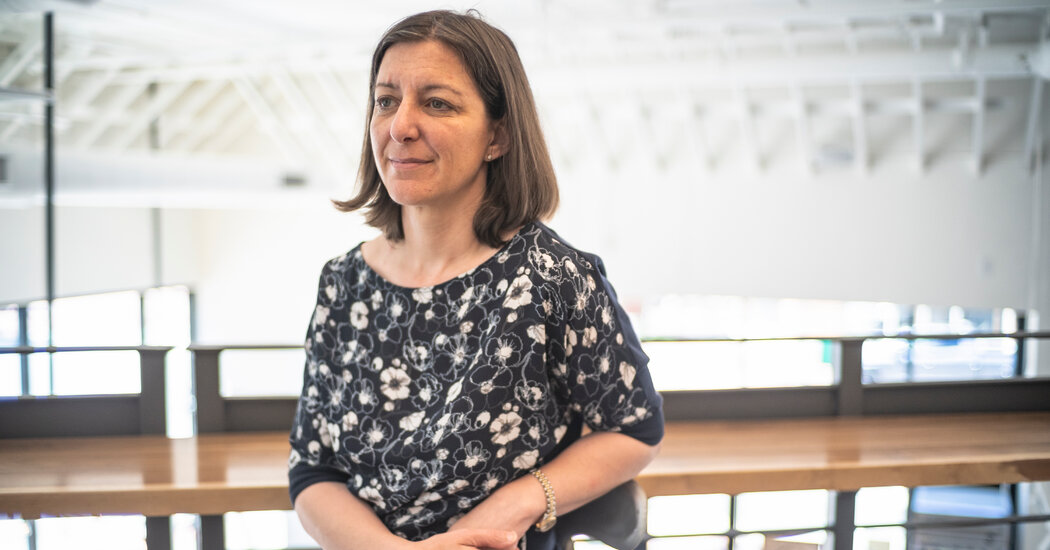 Representative Elaine Luria of Virginia knows the coming hearings could be a political liability for her in a Republican-leaning district. “If I don’t get re-elected because of this, that’s OK.”

VIRGINIA BEACH — Representative Elaine Luria knew from the start that serving on the House committee investigating the Jan. 6, 2021, attack on the Capitol could be a political liability in her Republican-leaning district in Virginia’s tidewater.

With Democrats clinging to the slimmest of majorities in Congress, she figured last year that her letter to Speaker Nancy Pelosi requesting a spot on the panel would be rejected on those grounds alone. Why would the speaker choose a member so vulnerable for a task that would surely inflame the considerable number of voters here who remain loyal to Donald J. Trump?

She did get the job, and now, with her grasp on the district more tenuous than ever, Ms. Luria — in the second term of a tenure in Congress that was supposed to focus mainly on building up the Navy — finds herself in a tricky spot, as the only endangered Democrat on a committee about to open a high-profile set of hearings examining how Mr. Trump and his allies launched an unprecedented attack on democracy.

“You just want to thumb your nose at that because that’s not the most important thing about serving,” she said in low-key defiance, conceding that she bears a special burden because of the conservative bent of her district. “If I don’t get re-elected because of this, that’s OK.”

Ms. Luria has spent the days leading up to Thursday’s opening hearing reviewing old videos of the Watergate hearings and preparing for the spotlight. She and Representative Adam Kinzinger, Republican of Illinois, will be the closing act in this month’s series of public sessions, leading the final hearing dissecting Mr. Trump’s role in inciting the riot.

With Democrats bracing for losses this fall, much rests on whether the committee’s hearings can capture the attention of the American public. The panel’s task is to convince voters that the issues raised in the run-up to the riot and in its aftermath are not ancient history, but a clear and present danger to democracy and the rule of law.

“We’re not at a situation where former President Trump has expressed any sense of remorse about what happened,” Representative Liz Cheney, Republican of Wyoming and the committee’s vice chairwoman, said on CBS’s “Sunday Morning.” “We are, in fact, in a situation where he continues to use even more extreme language, frankly, than the language that caused the attack. So people must pay attention.”

But there is a political component as well, not only for Ms. Luria, whose district lines were redrawn this year to turn a true tossup district into one that leans distinctly Republican, but also for all Democrats facing difficult re-election races. If November’s midterms are simply a referendum on one-party Democratic rule under President Biden, whose approval rating has sagged, the losses could be devastating.

But if voters regard their ballots as a choice between two political parties — one trying but failing, the other veering dangerously toward extremism — those losses could be mitigated. In the coming weeks — with the Jan. 6 hearings, an expected overturning of Roe v. Wade by the Supreme Court and the new focus on gun violence — Democrats are hoping that choice will be crystallized.

A new ABC News-Ipsos poll found that while voters still broadly rate inflation and gas prices as huge issues, their single most important concerns are diffuse. Inflation was chosen by 21 percent and the economy more broadly by 19 percent, but gun violence was the top priority of 17 percent and another 12 percent cited abortion.

The Jan. 6 hearings could raise still more doubts about returning power to the Republicans, said Celinda Lake, a Democratic pollster who has been conducting focus groups with swing voters.

“People think it’s part and parcel of a faction of Republicans who are just going way too far,” she said of Jan. 6. Voters, she added, “do have an ability to link it to other pieces of the agenda.”

Ms. Luria, who served as a naval officer for 20 years, is by no means making her service on the committee her calling card for re-election. She said she was most likely the only Democratic incumbent campaigning on her fight to increase the budgets of the Navy and the Air Force, while hitting Mr. Biden on foreign policy.

On the campaign trail, she is more likely to be talking about flood mitigation in Hampton Roads, the deepening of commercial shipping channels around Norfolk Harbor or the renaming of a post office in Virginia Beach than her work on the Jan. 6 committee.

But like it or not, her role is getting notice. As she walked into a local eatery in Virginia Beach on Monday, a young law student was waiting to buttonhole her about price gouging of infant formula and to thank her for her efforts around the Capitol attack.

“The other day, my husband was stopping to get a piece of pizza at Costco for my daughter, and I went ahead and took the groceries out,” Ms. Luria recalled. “He had three people come up to him after I walked out, and they said, ‘We didn’t really want to bother Elaine, but please tell her thank you.’”

It is purely anecdotal, she admitted, but in her district, one in five voters are either active-duty military or veterans. They took an oath to defend the Constitution, and in 2020, Virginia Beach voted for a Democratic presidential candidate for the first time since 1964. They care about the institutions of the United States and the fate of its democratic traditions.

The Republicans challenging Ms. Luria see it differently, but they face their own divisions. Jen Kiggans, a state senator and Navy veteran, is running as a traditional Republican with the backing of the House leaders in Washington.

Jarome Bell, another Navy veteran who has the backing of Representative Bob Good, the most conservative member of the Virginia House delegation, and much of the Trump world, unapologetically describes himself as “ultra-MAGA.”

Though Ms. Kiggans calls Jan. 6 “a dark day for our country and a stain on our democracy,” she said she hears nothing about it from the voters.

“The fact that our current congresswoman is going to focus on Jan. 6 — it’s very telling,” Ms. Kiggans said. “She’s not focusing on what’s really important to the voters of the Second District.”

It says much about the looming June 21 Republican primary that Ms. Kiggans would not say that Mr. Biden was the lawfully elected president.

“Joe Biden is in the White House — living in the White House, and I wish he was not,” she said twice, offering what has become an increasingly standard answer from Republicans who will not repeat Mr. Trump’s lie that the election was stolen but are unwilling to cross their supporters by saying truthfully that it was not.

Mr. Bell also thinks the election will not be about Jan. 6, but he has different thoughts on that day. Most of the people who marched on the Capitol were exercising their rights to free speech and to redress their government, he said before digging into steak and eggs at Judy’s Pub.

Those who attacked the police were led by F.B.I. instigators and left-wing “antifa” infiltrators, he added, repeating a falsehood circulated by hard-right figures. Since that day, he said, dozens of law-abiding Americans have been held as “political prisoners.”

“If you’re asking me do I think Jan. 6 was an insurrection, I’ve been to countries that have had insurrections, so no,” he said, then added: “You know when the insurrection was? Nov. 3, 2020. That was a coup.”

Mr. Bell said he was glad Ms. Luria would be playing such a visible role in the Jan. 6 hearings. If he prevails in the primary, he plans to use her appearances against her.

“I don’t think it’s going to play well for her,” he said. “I know they’re going to put her up front and center in prime time. Well, we’re going to be watching as well.”

At Judy’s Pub, patrons showed no interest in the coming hearings. Behind the bar, a handwritten sign read, “In case you have been living under a rock or have not been to other bars, we did not forget to order beer or liquor!!,” imploring customers to “not give the bartender a hard time” for shortages that were out of his control.

Michael Schwenk, 50, sat at the bar sweating the cost of filling his truck for deliveries.

Laurie Graham, 65, said she had stopped buying meat and feared the day when she simply would not be able to fuel her car.

Ms. McDougald had thoughts about Jan. 6, sharing her view that Democrats like Representative Maxine Waters of California and Senator Chuck Schumer of New York had done their share of incitement and complaining of a double standard she said had pervaded the run-up to the hearings. But then she grew weary of the subject.

“People already have their minds made up,” she said. “It’s not going to make any difference.”