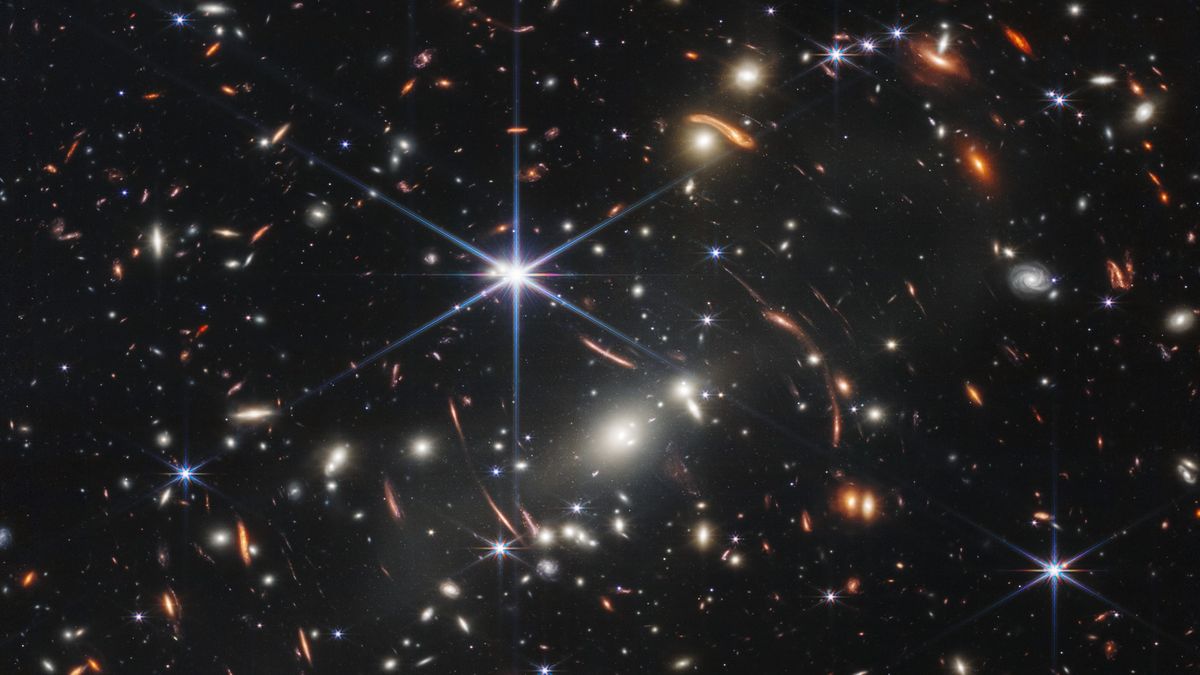 The James Webb Space Telescope (JWST) has not disproved the Big Bang, despite an article about a pseudoscientific theory that went viral in August, and which mischaracterized quotes from an astrophysicist to create a false narrative that the Big Bang didn’t happen.

Although the James Webb Space Telescope has only been conducting science operations for a few months, it has already made some iconic discoveries, including the detection of what could be some of the earliest galaxies ever seen, that existed just 200 million years after the Big Bang. Although issues with calibrating the instruments might mean that some of these galaxies are not as distant as first thought, JWST has almost certainly broken the record with some of them.

“JWST is designed to find the very earliest galaxies in the universe,” Allison Kirkpatrick, an astrophysicist at the University of Kansas, told Space.com. “One of the things that it found is that those galaxies are possibly more massive than we thought they would be, while another surprising thing is that it revealed that these galaxies have a lot of structure, and we didn’t think galaxies were this well organized so early in the universe.”

Related: The history of the universe: Big Bang to now in 10 easy steps

Cosmology‘s standard model describes how the first galaxies were formed through a hierarchical process, involving small clouds of gas and clusters of stars coming together to form larger nascent galaxies. That these early galaxies seem a little more evolved than expected in JWST’s observations is an intriguing astrophysical puzzle that confounds current models of galaxy growth.

Nature (opens in new tab) wrote a piece on the research on July 27, in which Kirkpatrick said: “Right now I find myself lying awake at three in the morning, wondering if everything I’ve ever done is wrong.” It’s this quote that was later misused.

“It was a good quote!” Kirkpatrick said. “I try to be a pretty forthright person, and I meant what I said — that everything I had learned about the first galaxies based on previous telescopic data probably wasn’t the complete picture, and now we have more data so we can refine our theories.”

Kirkpatrick went back to her research and forgot about her quote. That was, until mid-August, when she received a text from a friend saying that there was an article — originally published by an organization called the Institute of Art and Ideas but now being republished on mainstream news sites — saying that JWST’s observations of distant galaxies had disproved the Big Bang, which is not correct.

Worse still, the article had taken what Kirkpatrick had told Nature and misused it out of context to give the false impression that astrophysicists were panicking over the thought of the Big Bang theory being wrong.

The author of the article, an independent researcher named Eric Lerner, has been a serial denier of the Big Bang since the late 1980s, preferring his personal pseudoscientific alternative.

“I saw it and thought ‘This is horrible, but it’s also nonsense, nobody is going to read this,'” Kirkpatrick said. “The next thing I know, everybody has read it!”

Things started to take a stressful turn for Kirkpatrick. Though her immediate friends and colleagues knew her well enough to know that she had been misquoted, more distant acquaintances started getting in touch, asking if she’d really said it and even questioning her sanity. Then came the emails, dozens cluttering her inbox, from various people who had read the article and believed it. People even called her phone.

“I didn’t reach out to anybody, I didn’t want to engage,” she said. “It upset me because there are a lot of people very interested in science, but who don’t have the background to distinguish fact from fiction, and they read something like this and think it’s true.”

None of this is surprising to Lee McIntyre, a philosopher of science at Boston University and author of the book How to Talk to a Science Denier (opens in new tab) (MIT Press, 2021).

McIntyre is keen to point out the difference between people who deliberately peddle anti-science narratives and people who get sucked into believing it because they don’t know any better. While researching his book, McIntyre spent several days at a flat-Earth convention talking to believers and came away with a better understanding of the methods science deniers use regardless of the topic at hand.

1. Check the source — is it from a reputable source such as a peer-reviewed journal or a mainstream news site?
2. Qualifications — is the writer with a university or reputable institution, or are they an ‘independent researcher’ with no accreditation?
3. Who else agrees — can you find other accredited experts from mainstream institutions who are in agreement, or at least provide some validity?
4. References — has the writer done their research and cited other credible research to support their results?
5. Follow the logic — are they just cherrypicking evidence, leaving things out to suit their narrative?
6. Become an expert — if all else fails, and you’re still not sure, then do a bit of open-minded reading on the subject to make sure you’re not being misled.

“The first step in science denial is cherrypicking evidence,” McIntyre told Space.com. “Number 2 is that they lie about conspiracy theories. Number 3 is they engage in illogical reasoning. Number 4 is they rely on fake experts and denigrate real experts. And number 5, they insist that science has to be perfect in order to be credible.”

McIntyre said that the tactics employed in Lerner’s article are classic misdirections used by science deniers. For example, Lerner uses logical fallacies, such as implying that in the Big Bang model more distant galaxies should look larger because in an expanding universe their light should have left when they were closer to us. This premise makes absolutely no sense — these were the farthest galaxies when their light left them, and they’re still the farthest galaxies now, so they shouldn’t appear any bigger with distance.

He also cherrypicks data, for example completely ignoring other evidence for the Big Bang such as the cosmic microwave background, which is leftover heat from the event. He over-blows real data, suggesting that the unexpected characteristics of these early galaxies is not just a massive problem for models of galaxy formation, but, he writes, rules out the entirety of cosmology. And he denigrates real scientists by knowingly misusing their words against them and claiming that there is a conspiracy among “government-funded committees” to stamp out any heretical ideas that dare question the Big Bang.

Science denial is a growing problem. While science denial has existed for as long as science, in recent years it seems to have grown more pervasive, perhaps encouraged by social media. And although somebody choosing not to believe in the Big Bang won’t cause society to unravel, other examples of science denial are not so benign: not believing in vaccines, for example, saw millions of people around the world die unnecessarily from COVID-19, while climate denial has stymied efforts to bring in legislation to combat the planet’s rising global temperatures.

“Science denial has gotten worse because it’s now more of a threat to the wellbeing of our society,” McIntyre said. “Denialism costs lives.”

Kirkpatrick echoes McIntyre’s line of thinking. “In this case, it’s pretty benign if someone thinks the Big Bang didn’t happen, but you see the same kind of thing with things that really matter, such as COVID vaccines and climate change,” she said. “If we start getting all these conspiracy theories in astronomy, if people are willing to believe those, does it make them more willing to believe other conspiracy theories?”

Victims of a lie

Getting through to science deniers is difficult, admits McIntyre, because their instinct is to distrust what they are being told by experts or authority figures. It’s tempting for scientists to not respond to them and hope they will go away, but McIntyre suggests that this is a mistake: they don’t go away.

“If we ignore it, that’s one of the worst things we can do, because if we don’t engage and refute, they are just going to recruit more believers and it can get out of hand,” McIntyre said. If you want to win science deniers over, however, you first need to get them to trust you, which is really difficult.

“The only people who have ever changed their mind, that I know about, did so because somebody they trusted took the time, with as much love and empathy as possible, to get them to realize that they were mistaken,” McIntyre said. “It requires the realization that most science deniers are victims. I’m not talking about the Eric Lerners of the world, I’m talking about the people who believe him.”

Astronomers do have a head start over many other scientists because public outreach is a huge part of an astronomer’s work and amazing images such as those taken by JWST reliably wow people. Astronomers are able to engage with the public and put a human face to the science in a way that is more difficult for researchers in some other scientific fields.

“While there has been a definite erosion of trust in science, in astronomy we do take public outreach seriously, and as a result I think astronomers are still some of the more trusted scientists,” Kirkpatrick said.

In the meantime, astronomers continue to learn more about the early universe with the fantastic data coming down from JWST.

The irony is that JWST’s observations are actually supporting the Big Bang model, showing that the first galaxies were smaller and grew larger over time, just as Big Bang cosmology predicts. The surprising finding that galaxies in the early universe are more plentiful, and a little more massive and structured than expected, doesn’t mean that the Big Bang is wrong. It just means that some of the cosmology that follows the Big Bang requires a little bit of tweaking.

And that’s the fun of science. Despite the arguments from Lerner and other science deniers, science is never clean-cut; we’re always learning, always improving our theories, and there is no shadowy conspiracy trying to stamp out independent thought. More than anything, science is based on observation and evidence, which the Big Bang has in bucketloads.

That’s not to say people shouldn’t be allowed to question things, but intelligent questioning is done in a framework of open-mindedness without pre-conceived ideologies, where beliefs are forged by evidence, rather than the other way around. That’s exactly how the Big Bang theory was conceived nearly a century ago: by following the (then surprising) evidence that the universe is expanding, working out what this might logically mean, and then testing it on predictions such as the existence of the CMB radiation.

So, the next time you read someone saying that the Big Bang didn’t happen, or that the Earth is flat, or that climate change isn’t happening, don’t take for granted what they’re saying. Politely ask them for their evidence and hold it to the highest standards, just like a scientist would.

Can we stop pretending that America is a functioning democracy?

Don’t Panic, But the Super Wealthy Are Quietly Building Doomsday…