Technology twists and turns and a back-to-school quiz 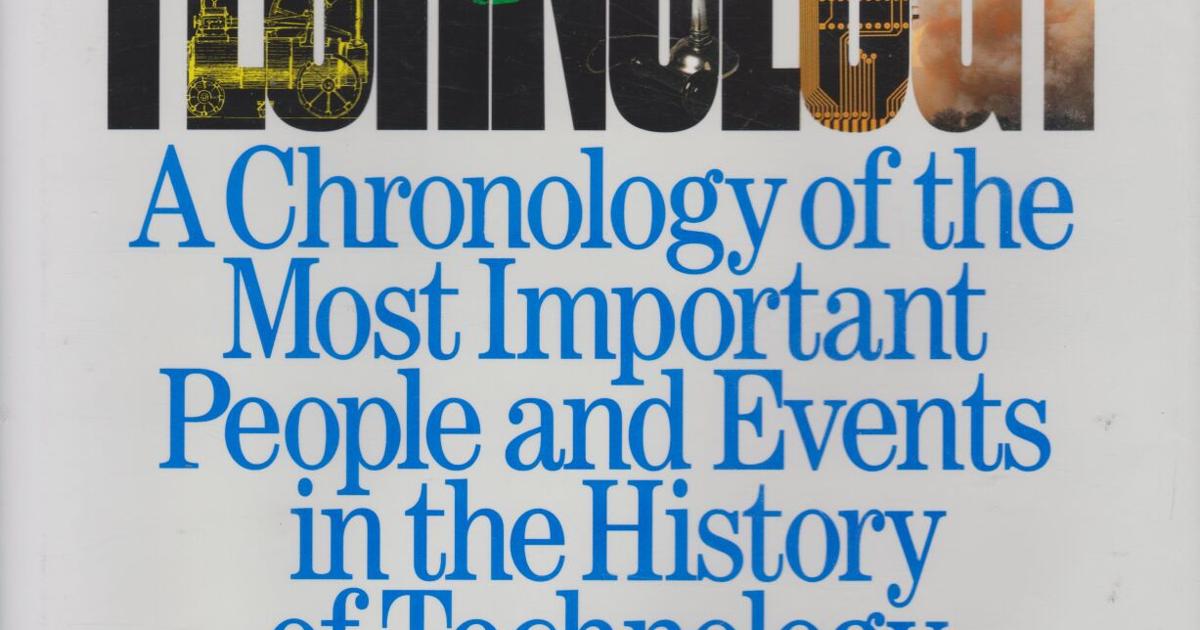 I read somewhere that a person born in the year 1700 would have little problem living in the 1800s. Following this line of thought, that someone born in 1800 would soon find themselves at home in the early 1900s. How about a person born in 1900 forced to live in the 2020s? I think he or she would have a great difficulty coping with microwave ovens, computers, modern electric appliances and so forth.

Stay with me; this is leading somewhere.

Way back in 1993 — I am assuming that you, Gentle Reader, were here 30 years ago — a book titled, “The Timetables of Technology: A Chronology of the Most Important People and Events in the History of Technology,” was published by the firm of Simon & Shuster. The book was compiled by Bryan Bunch and Alexander Hellemans, both veteran writers and editors of books about the history of science.

A chronology (from two Greek words meaning “time-ordered”) is basically a list of events, put into the order they occurred. In the case of Messrs. Bunch and Hellemans, the events are inventions, discoveries and “significant events.”

Of course, what may be significant to me may not be of much significance to you and vice versa. The authors, it must be said, cover a lot of events.

Bunch and Hellemans begin their opus with events at around the year 2,400,000 BC, with the appearance of Homo habilis, our remote ancestor, in East Africa. From that point mankind goes on to discover things and invent tools to help him and her survive and to make life more pleasant. What things? Well, such things include simple stone tools, such as choppers, scrapers, stone drills, bone needles and other components of a “Stone Age Tool Kit” like those found in the Olduvai Gorge in northern Tanzania. More recent inventions would include parts for our home’s failing air-conditioner in West Iredell, ordered some weeks ago but still not here.

The Timetables goes on for 451 pages and notes the arrival of a number of nifty items, including the cotton “gin“ (short for “engine”) in 1793, the airplane in 1903, penicillin in 1928 and a plethora of other thing-a-ma-bobs and gee-gaws.

Penicillin, you may have known, was not invented nor discovered in 1928. It, a common mold found on bread, had been known for years. However, a fellow named Alexander Fleming was the first to note that the mold had a particularly beneficial property: it killed certain bacteria.

I love great quotations, and I have come across a doozey of one in the book on page 412, where the authors are writing about the Information Age, which they define as going from 1973 to 1993, when their book was published. As far as I know, we are still in that age.

Not everyone is pleased to be a part of the “Information Age.” Views of critics regarding the excessive use of computers in teaching young children. Certain authorities feel that computers, limited as they are, may “impoverish the intellectual development of intellectual capabilities” in our students.

Here’s the quote: “For these critics, the computer replaces ‘knowledge’ with mere data: Ideas contain data, but data contain no ideas.”

As our schools begin to crank up again with computers in many classrooms and even more computers in students’ homes, I have created a short test for you R&L readers. See how close you come to the year the following were invented, discovered or noted. All have come on the scene since the end of World War II (1945). Good luck! Note: They are not in any chronological order.

A further thought or two. In 1970, sociologist and futurist Alvin Toffler wrote a book titled “Future Shock,” suggesting that many people are just not ready for the speed at which technological and social changes are taking place these days. I confess I would count myself among that group at times. I wonder if there is an updated version of Bunch and Hellemans’ book. The first edition which I have, ends in 1993 and I suspect that here may have been a few new twists to technology since then.

See how well you can place these events in their proper year:

1. The world’s first artificial satellite, Russia’s Sputnik I, is launched in 19__.

3. The first Jarvic 7 artificial heart is implanted in a patient in 19__.

4. A working prototype of digital high-definition television is first produced in 19__.

5. The first airplane to reach supersonic speed is piloted by Chuck Yeager in 19__.

6. Tractors outnumber horses for the first time in history in the U.S. in 19__.

10. Digital cellular telephone system is introduced to the U.S. in 19__.

After Mar-a-Lago search, Meadows turns over more texts and emails…