Meet Ross 508b: Scientists discover a ‘SUPER EARTH’ exoplanet four times bigger than our own planet orbiting a star 36.5 light-years away

By Sam Tonkin For Mailonline

A new ‘super Earth’ that is four times bigger than our own planet has been spotted orbiting a star just 36.5 light-years away.

The exoplanet, which has been named Ross 508b, was discovered in the so-called habitable zone of a faint red dwarf that it circles every 10.75 days.

That is a lot quicker than the Earth’s orbit of 365 days, but the star that Ross 508b orbits is much smaller and fainter than our sun.

Despite being in this ‘Goldilocks’ zone — where it is not too hot and not too cold for liquid water to exist — experts think it is unlikely to be habitable for life as we know it.

But based on what is known about planetary mass limits, the newly-identified world is likely to be terrestrial, or rocky, in the same way as Earth, rather than gaseous. 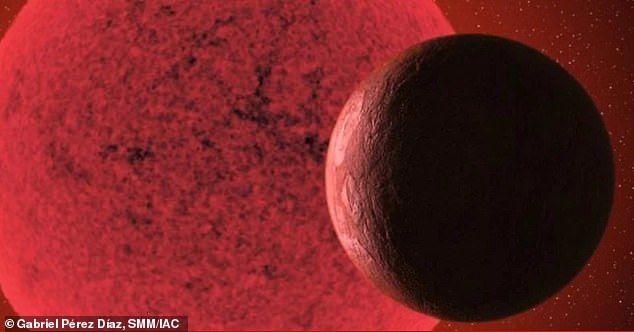 A new ‘super Earth’ that is four times bigger than our own planet has been spotted orbiting a star just 36.5 light-years away. The exoplanet Ross 508b was discovered in the habitable zone of a faint red dwarf. Pictured is an artist’s impression of a super Earth orbiting a red dwarf

Ross 508b was spotted by an international team of astronomers using the National Astronomical Observatory of Japan’s Subaru Telescope in Hawaii.

It has been described in a paper led by astronomer Hiroki Harakawa, of the Subaru Telescope, and is the campaign’s first exoplanet.

Ross 508b orbits a nearby M-dwarf star known as Ross 508, hence why it was given its name.

‘Super-Earths’ are planets more massive than ours but which do not not exceed the mass of Neptune.

Although the term refers only to the mass of the planet, it is also used by experts to describe planets bigger than Earth but smaller than the so-called ‘mini-Neptunes’.

‘This periodicity has no counterpart in photometry or stellar activity indicators, but is well-fit by a Keplerian orbit due to a new planet, Ross 508b.’

Ross 508, at 18 per cent of the mass of our sun, is one of the smallest, faintest stars with an orbiting world that has been discovered using radial velocity.

The main technique for finding exoplanets is the transit method, which is what NASA’s exoplanet-hunting telescope TESS uses, as well as Kepler before it. 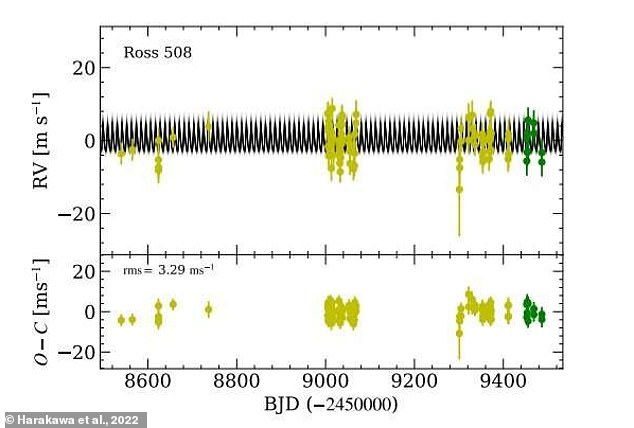 Ross 508b was spotted by an international team of astronomers using the National Astronomical Observatory of Japan’s Subaru Telescope in Hawaii. They found it with a technique known radial velocity

It involves an instrument staring at the stars and searching for regular dips in their light that are caused by an object orbiting between Earth and the star.

Astronomers then use the depth of the transit to calculate the mass of the object, with the bigger the light curve the larger the planet.

A total of 3,858 exoplanets have been confirmed with the help of this method.

But the other technique is the radial velocity one, which is also known as the wobble or Doppler method.

It can detect ‘wobbles’ in a star caused by the gravitational pull of an orbiting planet.

The new discovery suggests that future radial velocity surveys in infrared wavelengths have the potential to uncover a huge number of exoplanets orbiting dim stars.

‘Our discovery demonstrates that the near-infrared RV search can play a crucial role to find a low-mass planet around cool M dwarfs like Ross 508,’ the researchers wrote in their paper.

The research has been published in the Publications of the Astronomical Society of Japan, and is available on arXiv.

Distant stars and their orbiting planets often have conditions unlike anything we see in our atmosphere.

To understand these new world’s, and what they are made of, scientists need to be able to detect what their atmospheres consist of.

They often do this by using a telescope similar to Nasa’s Hubble Telescope.

These enormous satellites scan the sky and lock on to exoplanets that Nasa think may be of interest.

Here, the sensors on board perform different forms of analysis.

One of the most important and useful is called absorption spectroscopy.

This form of analysis measures the light that is coming out of a planet’s atmosphere.

Every gas absorbs a slightly different wavelength of light, and when this happens a black line appears on a complete spectrum.

These lines correspond to a very specific molecule, which indicates it’s presence on the planet.

They are often called Fraunhofer lines after the German astronomer and physicist that first discovered them in 1814.

By combining all the different wavelengths of lights, scientists can determine all the chemicals that make up the atmosphere of a planet.

The key is that what is missing, provides the clues to find out what is present.

It is vitally important that this is done by space telescopes, as the atmosphere of Earth would then interfere.

Absorption from chemicals in our atmosphere would skew the sample, which is why it is important to study the light before it has had chance to reach Earth.

This is often used to look for helium, sodium and even oxygen in alien atmospheres.