Sri Lanka must ‘reverse the drift towards militarisation’: UN 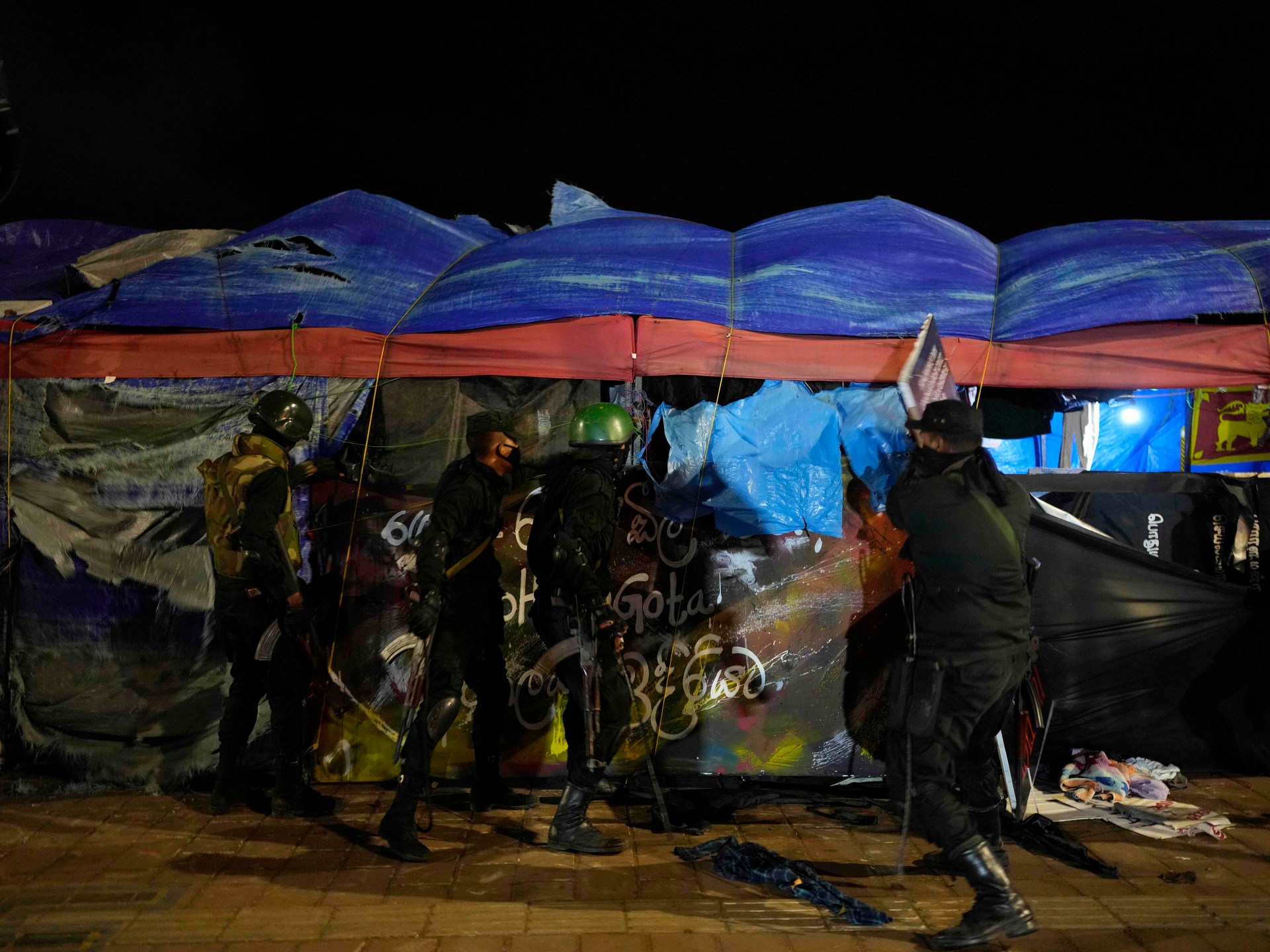 The latest United Nations report calls on Sri Lanka to end its human rights violations as the country faces its worst economic crisis yet.

Sri Lanka must immediately reverse its “drift towards militarisation”, the United Nations has said in a human rights report, calling on the new government to engage in dialogue “to advance human rights and reconciliation”.

The South Asian island nation has suffered acute food and fuel shortages, lengthy blackouts and spiralling inflation this year after running out of foreign currency to import essentials amid its worst economic crisis to date.

The crisis sparked months of protests against the government over economic mismanagement, culminating in a huge crowd storming the residence of former President Gotabaya Rajapaksa, who then fled for the Maldives, Singapore and Thailand before returning to Sri Lanka last weekend.

President Ranil Wickremesinghe has been criticised for launching a crackdown on peaceful protesters since he succeeded Rajapaksa in July.

“The new government should immediately reverse the drift towards militarisation, end the reliance on draconian security laws and crackdowns on peaceful protest,” the UN Office of the High Commissioner for Human Rights (OHCHR) said in its latest report on Tuesday, referring to the new government which took over after Gotabaya Rajapaksa was forced to step down as president in July in the wake of mass protests.

“Fundamental changes will be required to address the current challenges and to avoid repetition of the human rights violations of the past,” said the OHCHR report.

It added that the government should also “show renewed commitment to security sector reform and ending impunity”.

🇱🇰 #SriLanka: UN report calls for accountability and deeper institutional reforms to prevent a recurrence of past violations. The new Government should embark on a national dialogue to advance human rights and reconciliation.

Sri Lanka’s government defaulted on its $51bn foreign debt in April and is in ongoing negotiations for an International Monetary Fund bailout.

Rajapaksa’s government was accused of introducing unsustainable tax cuts that drove up government debt and exacerbated economic problems just as the country was struggling with the impact of the COVID-19 pandemic.

The 73-year-old issued his resignation from abroad after fleeing the country in July, but he flew back to Colombo on Saturday and was garlanded with flowers by political allies on his return.

He is now living in a new official residence with a security detail, both provided by Wickremesinghe’s government, to the dismay of protest leaders who campaigned for him to face legal action.

Former UN High Commissioner for Human Rights Michelle Bachelet, whose term ended last month, said in the report that those responsible for bankrupting the island should be prosecuted.

“The High Commissioner hopes that the new administration will respond to the popular demand for accountability for economic crimes, including corruption, and abuse of power with a renewed commitment to end impunity,” she said.

It was the first time the UN rights office raised the economic crisis, in a report repeating its calls for those who perpetrated atrocities during the island’s long civil war to be brought to justice.

“The High Commissioner encourages the international community to support Sri Lanka in its recovery, but also in addressing the underlying causes of the crisis, including impunity for human rights violations and economic crimes,” the 16-page report said.

The report also repeated long-standing calls by the rights office for the prosecution of those responsible for atrocities during the island’s decades-long civil war, which ended in May 2009.

Sri Lanka has been resisting international calls to investigate allegations that its troops killed at least 40,000 Tamil civilians in 2009.

Rewriting Our Understanding of Epigenetics: Scientists Reveal We Inherit More…

Time to shed more light on money in Swedish politics