Republicans Call Biden Divisive While Equating Him To Satan and Hitler

A red light? ? A podium? Two uniformed U.S. Marines? Looks like the summoning of Satan if you ask the GOP.

President Joe Biden delivered one of his presidency’s strongest condemnations of Donald Trump and the MAGA movement in a prime-time speech on the steps of Independence Hall in Philadelphia. The stage was lit in alternating bands of blue and red, but a close up shot of Biden framed him entirely within the red portion of the lighting. The image evoked the unholy for many Republicans — despite red being the party’s official color.

“He looked like he was in the depths of hell,” former Governor of South Carolina Nikki Haley told Fox News on Friday.

Former assistant treasury secretary Monica Crowely struck a similar chord Thursday night. “The imagery there was almost satanic, with that blood-red lighting and the two Marines behind him,” she said on Fox News. “It was just insane.”

In his speech, Biden, who spent the week campaigning on behalf of Democratic candidates in Pennsylvania, said “Donald Trump and the MAGA Republicans represent an extremism that threatens the very foundations of our republic … The Republican party today is dominated, driven, and intimidated by Donald Trump.” 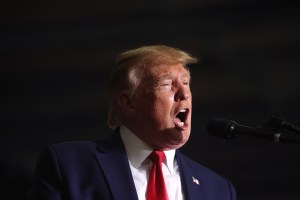 During a speech in Maryland last week, Biden called Trump and his most loyal supporters in government “semi-fascist,” a statement that drew intense ire from conservative pundits despite their own storied (and recorded) history of lobbing accusations of fascism at their opponents.

If Biden’s stagecraft and message wasn’t evoking Satan, it was evoking Adolf Hitler. Rep. Marjorie Taylor Greene posted a video where Biden’s features were edited to resemble the Nazi dictator.

Others took the opportunity to compare Biden to a Sith lord.

Former first son Donald Trump Jr. implored his followers to consider what would happen if his father had ever maligned an entire group of voters in such a manner and, of course, Twitter always remembers.

Biden Calls Out Trumpism: Top Political News of the Week