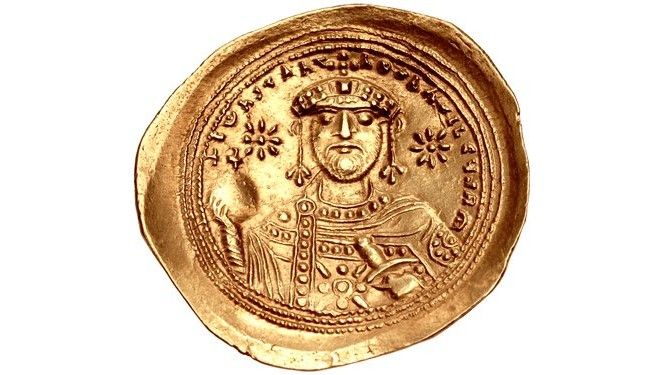 In A.D. 1054, a nearby star ran out of fuel and blew up in a dazzling supernova explosion. Though located 6,500 light-years away, the blast was clearly visible in the skies over Earth for 23 days and several hundred nights after.

The explosion, now known as SN 1054, was so bright that Chinese astronomers dubbed it a “guest star,” while skywatchers in Japan, Iraq and possibly the Americas recorded the explosion’s sudden appearance in writing and in stone. But in Europe — which was largely ruled at the time by the Byzantine Emperor Constantine IX and the Christian church — the big, bedazzling explosion in the sky was never mentioned, not even once.

Why not? Did the church simply ignore this spontaneous star, or was a more nefarious plot to cover up the reality of the cosmos at play? According to new research, a clue to the answer may hide in an unexpected place: a limited-edition gold coin.

In a study published in the August 2022 issue of the European Journal of Science and Theology, a team of researchers analyzed a series of four Byzantine gold coins minted during the reign of Constantine IX, from A.D. 1042 to 1055. While three of the coins showed only one star, the authors suggest that the fourth coin — which shows two bright stars framing an image of the emperor’s head — may be a subtle, and possibly heretical depiction of the supernova of 1054.

According to the team’s interpretation, the emperor’s head may represent the sun, the eastern star represents Venus — a regularly visible daytime object also called the “morning star” — while the western star represents SN 1054, which was visible for nearly a month in the daytime sky opposite Venus. The team adds that the two stars may also represent the warring Eastern Orthodox and Western Catholic churches, which split from each other during an event called the Great Schism in July of 1054.

If this interpretation is correct, and the rare coin does show SN 1054, then it suggests that Byzantine scholars may have been forbidden from studying or writing about the supernova due to religious restrictions. In essence, the church may have had a “philosophical prejudice against any observed changes in the supposedly perfect and eternal night sky,” the researchers wrote in the paper. Combined with the chaos of the schism at the time, church officials may have seen it as prudent to simply ignore the supernova. But at least one clever scholar may have found a way around censorship.

“Given the Church’s stand on astronomy/astrology, there would be a strong incentive not to report the occurrence of any event — including an obvious supernova — that would threaten the theological/astronomical status quo,” the study authors wrote. “Perhaps one of the ways for a clever astronomer at Constantine IX’s University of Constantinople to record the event would be to use a cipher, in this case, a minted coin of a special edition that was minted after the 1054 event.”

The researchers also visited various museum collections to study 36 copies of this two-starred coin, which brought another peculiar detail to light. The size of the western star shown on the coins was not uniform, but seemed to shrink over time — possibly meant to represent the gradual dimming of SN 1054 in Earth’s sky.

These are reasonable hypotheses, though they lack concrete evidence, the study authors admit. The size and arrangement of the stars on the coins could represent something else altogether, and only happen to coincide with the appearance of the supernova. Further, there is no definitive date assigned to any of the 36 coins examined, so it’s impossible to say whether they were minted before or after the supernova appeared.

Today, SN 1054 is still visible as the Crab Nebula — though you’ll need a very good telescope to properly take in its crustacean beauty. Lucky for astronomers, there are no emperors preventing them from studying the fascinating object.

Two Super-Earths Discovered 100 Light-Years Away, and One Could Possibly…

Jason Momoa So Furious About Environment That He Shaved His…