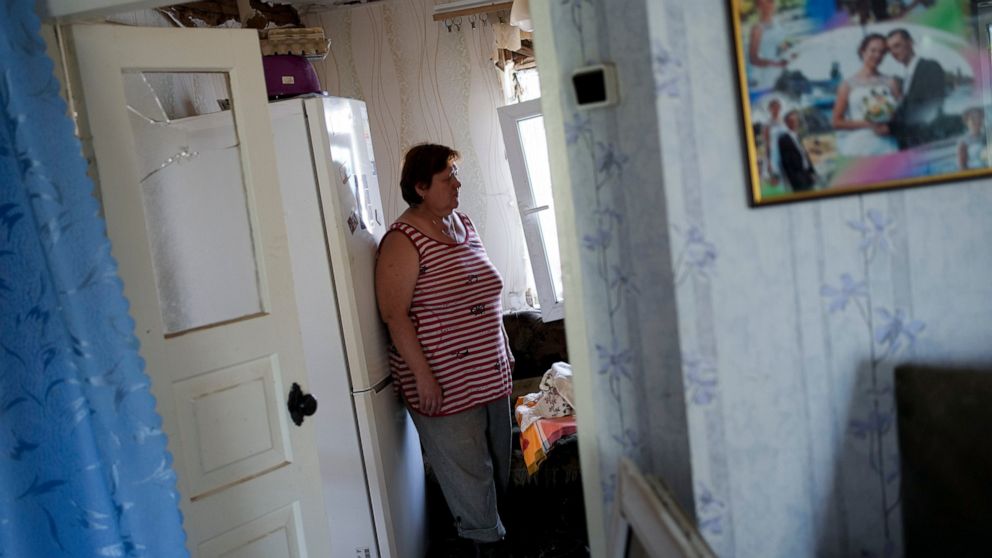 KYIV, Ukraine — The British government said Monday that the multiple-launch rocket systems it is offering to Ukraine will bring “a significant boost in capability” for the country’s efforts to resist Russia’s invasion, which loomed large over D-Day commemorations in northern France.

“If the international community continues its support, I believe Ukraine can win” its war against Russia, British Defense Secretary Ben Wallace said in a statement.

The statement came after comments Sunday by Russian President Vladimir Putin, who warned the West against sending longer-range rocket systems to Ukraine, where the war was in its 103rd day.

The British government described the M270 weapon system as a “cutting edge” military asset which can strike targets up to 80 kilometers (50 miles) away “with pinpoint accuracy.” The system is manned by three gunners and is mounted on an armored launcher with tracks.

The United Kingdom pledged last week to send the weapons. It gave no details about delivery dates.

Washington and London hope the deliveries will help Ukraine turn the tide of the war in its eastern Donbas region which Russia appears minded to capture entirely.

They are unlikely to have an immediate impact, however. The Pentagon said last week that it will take at least three weeks to get the U.S. weapons onto the battlefield. Russia-backed separatists have fought the Ukrainian government since 2014 in the Donbas.

The U.S. has stopped short of offering Ukraine longer-range weapons — those with a range of up to 300 kilometers (186 miles) — that could fire deep into Russia and could inflame tensions with Moscow.

Russian Foreign Minister Sergey Lavrov warned the West that if it provides Ukraine with long-range rockets, Moscow will respond by taking over larger areas of Ukraine.

Speaking during an online news conference Monday, Lavrov said that “the longer the range of weapons you supply, the farther away the line from where neo-Nazis could threaten the Russian Federation will be pushed.” Moscow says it’s fighting against neo-Nazis in Ukraine — a false claim derided by Ukrainian President Volodymyr Zelenskyy, who is Jewish and lost relatives in the Holocaust.

Ukraine’s struggle was at the forefront of comments by the U.S. Chairman of the Joint Chiefs of Staff and was heartfelt by veterans of D-Day who gathered in Normandy on Monday.

“The fight in Ukraine is about honoring these veterans of World War II,” Army Gen. Mark Milley said at the American Cemetery of Colleville-sur-Mer, overlooking Omaha Beach.

“It’s about maintaining the so-called global rules-based international order that was established by the dead who are buried here at this cemetery,” he said.

American D-Day veteran Charles Shay, 97, was at Omaha Beach to mark the 78th anniversary of June 6, 1944 landings and pay tribute to those who fell that day.

Asked about his feelings regarding the war being waged on the European continent, Shay told The Associated Press it “is a very sad situation.”

“In 1944 I landed on these beaches and we thought we’d bring peace to the world. But it’s not possible,” he added with regret.

Lavrov, the Russian Foreign Minister, meanwhile, attacked the refusal to let his plane fly into Serbia on Sunday as “cynical” and “unthinkable.” Reports said that Serbia’s neighbors, Bulgaria, North Macedonia and Montenegro had refused to allow the plane to fly through their airspace to reach Serbia.

“A sovereign state has been deprived of its right to conduct foreign policies,” Lavrov told an online news conference.

He blamed NATO allies — with whom Moscow is at loggerheads — for engineering the flight ban, saying it revealed that the main purpose of the alliance expansion is to try and isolate Russia.

Russia’s own use of missiles in Ukraine, meanwhile, continued to pummel targets, with the Russian military claiming Monday it had struck a Ukrainian factory that was repairing armor.

Russian warplanes fired long-range missiles to destroy a plant on the edge of the town of Lozova in the northeastern Kharkiv region that was repairing armored vehicles, Russian Defense Ministry spokesman Maj. Gen. Igor Konashenkov said.

Putin vowed to strike deeper into the heart of Ukraine if the West sends Kyiv longer-range missile systems. In a show of force, Russian missiles struck Ukraine’s capital, Kyiv, on Sunday.

Ukraine’s General Staff said Russian forces fired five X-22 cruise missiles from the Caspian Sea toward Kyiv, and one was destroyed by air defenses. Four other missiles hit “infrastructure facilities,” but Ukraine said there were no casualties.

Zelenskyy on Sunday visited command posts and the frontline positions of Ukrainian troops in the Donetsk and Luhansk regions, which make up the Donbas.

A Ukrainian regional governor said Monday that the situation in a key eastern town has worsened for defending troops.

Luhansk Gov. Serhiy Haidai said Monday that fierce fighting was continuing in the city of Sievierodonetsk, which is at the epicenter of the Russian offensive.

He described the combat situation as “quite dynamic,” adding that the Ukrainian forces had lost some of the gains they made over the weekend but are holding their positions in the city’s industrial zone.

“Our defenders managed to conduct a counteroffensive and free nearly half of the city, but the situation has worsened again now,” Haidai told The Associated Press in written replies to questions.

“The shelling of Sievierodonetsk has intensified, (the Russians) are destroying everything in line with their scorched earth tactics,” he said. The Russians “have an enormous amount of equipment and personnel. They have pulled up a lot of reserves,” he added.

Russian forces have been focusing in the capture of Sievierodonetsk and Lysychansk.

West of those cities, in the towns of Sloviansk and Bakhmut, cars and military vehicles have been speeding into town from the direction of the front line. Dozens of military doctors and paramedic ambulances worked Sunday to evacuate civilians and Ukrainian servicemen, many of whom had been hurt by artillery shelling.

David Keyton and Hanna Arhirova contributed to this report.

Follow AP’s coverage of the Ukraine war at https://apnews.com/hub/russia-ukraine

A drug cleared patients of rectal cancer in a world-first…