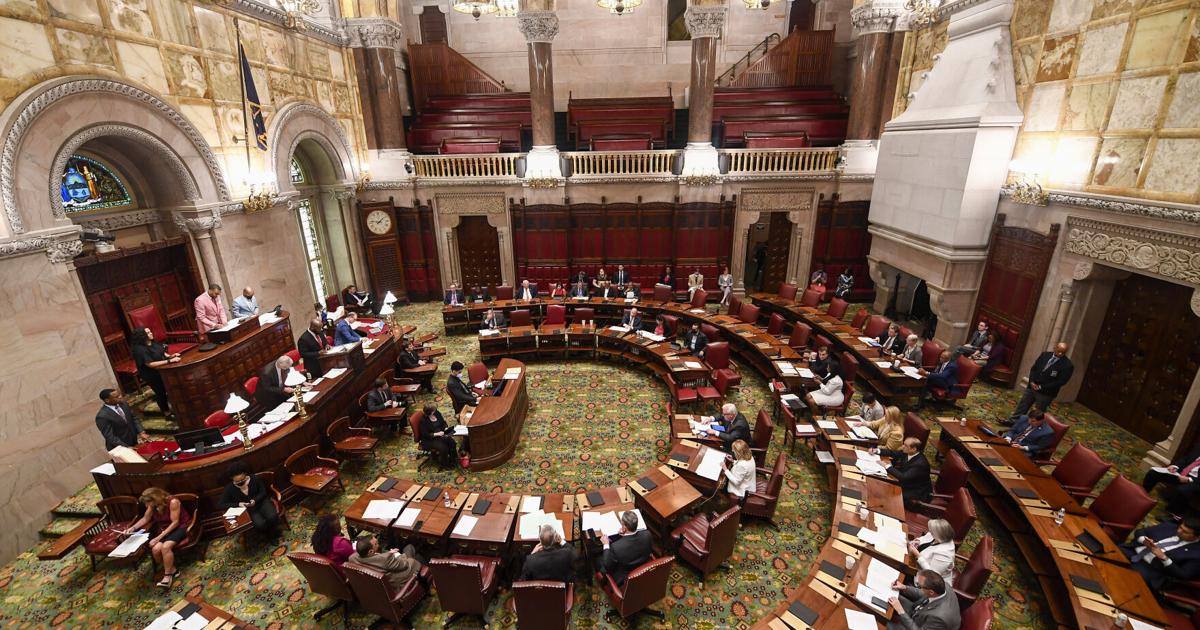 Democrat Jean Lapper has confirmed that she will challenge state Sen. Dan Stec, R-Queensbury, in the 45th Senate district.

“Many of the constituents in the 45th feel underrepresented in Albany. I have the skills, the energy and the temperament to work constructively for our communities to bring real results.” Lapper said in a news release, issued late Friday. “Those who know me recognize I’m no stranger to hard work, and I look forward to meeting more of my North Country neighbors and listening to their concerns.”

Stec said in a statement, issued Sunday, that his re-election campaign will focus on the faults of having “one-party control” of state government and his “being a strong voice against the Legislature’s New York City hyper-progressive agenda.”

Democrats have a majority in the both Senate and Assembly, and hold the governor’s office.

“I’m proud to be an advocate for the North Country and a strong voice against the policies making it more difficult to live and work in our communities,” said Stec, who is finishing his first two-year term in the Senate.

He previously served as a state assemblyman and was Queensbury town supervisor and a Queensbury Town Board member before that.

“My record speaks for itself, and it speaks to the values of our residents. I can’t wait to present it to the voters,” he said.

Lapper, a certified public accountant, ran unsuccessfully in 2019 for a Queensbury at-large seat on the Warren County Board of Supervisors.

She is a past president of Glens Falls Rotary Club and has served on the boards of the Family Services Association of Glens Falls and Tri-County United Way.

Lapper filed petitions with the state Board of Elections on Friday to enter the Senate race.

“The petitioning process is the first step in running for elected office, where you’re one-on-one with voters and hear their thoughts and concerns. I was well received and voters were happy to hear they will have a choice. I am grateful for the hard work of the many volunteers that, in just one week, were able to obtain substantially more than the 850 signatures required to be on the ballot,” she said in a news release.

Lapper said that a campaign launch event is being planned.

In other regional political news:

Legislation that Assemblywoman Carrie Woerner, D-Round Lake, spearheaded to stimulate the textile industry passed the Assembly and the Senate.

Woerner said in a telephone interview on June 6 that as soon as Gov. Kathy Hochul signs the bill, she will begin working with the state Department of Agriculture to establish a new state Textile Council, a state panel of experts to advise the department on industry issues.

It is expected that the council will begin meeting by the end of the year, Woerner said.

The council is among several provisions in the legislation, which has no fiscal impact because it does not establish any new state spending. It merely revises language of existing laws or parameters of existing economic development programs to incorporate the textile industry.

Tonko and Rep. Elise Stefanik, R-Schuylerville, were among those who voted in favor of the legislation, which passed the House by a vote of 384-37, with no Democrats voting against it.

“The advance of our Water Resources Development Act will help identify Army Corps sites where deployment of floating solar could be a feasible and cost-effective option,” Tonko said in a news release. “I call on the Senate to swiftly act on this important legislation so we can continue to make progress in meeting our clean energy goals, addressing climate change and driving economic growth.”

Republican congressional candidate Liz Lemery Joy on Friday announced she qualified for the “On the Radar” designation, the first level in the National Republican Congressional Committee campaign support program.

“I’m excited to join these strong candidates across the country as we work to take back the House,” she said in a news release.

Joy, a former blogger and speaker from Schenectady, is challenging incumbent Rep. Paul Tonko, D-Amsterdam, in the 20th Congressional District.

Maury Thompson covered local government and politics for The Post-Star for 21 years before he retired in 2017. He continues to follow regional politics as a freelance writer.

Community members sound off on proposed gun legislation in U.S.…