Nuclear isomers were discovered 100 years ago, and physicists are still unraveling their mysteries

Nobel laureate Otto Hahn is credited with the discovery of nuclear fission. Fission is one of the most important discoveries of the 20th century, yet Hahn considered something else to be his best scientific work.

In 1921, he was studying radioactivity at the Kaiser Wilhelm Institute for Chemistry in Berlin, Germany, when he noticed something he could not explain. One of the elements he was working with wasn’t behaving as it should have. Hahn had unknowingly discovered the first nuclear isomer, an atomic nucleus whose protons and neutrons are arranged differently from the common form of the element, causing it to have unusual properties. It took another 15 years of discoveries in nuclear physics to be able to explain Hahn’s observations.

We are two professors of nuclear physics who study rare nuclei including nuclear isomers.

The most common place to find isomers is inside stars, where they play a role in the nuclear reactions that create new elements. In recent years, researchers have begun to explore how isomers can be put to use for the benefit of humanity. They are already used in medicine and could one day offer powerful options for energy storage in the form of nuclear batteries.

This video shows radioactive uranium-238 in a chamber full of mist. The streaks are created as particles are emitted from the radioactive sample and pass through water vapor.

On the hunt for radioactive isotopes

In the early 1900s, scientists were on the hunt for new radioactive elements. An element is considered radioactive if it spontaneously releases particles in a process called radioactive decay. When this happens, the element is transformed over time into a different element.

At that time, scientists relied on three criteria to discover and describe a new radioactive element. One was to look at chemical properties – how the new element reacts with other substances. They also measured the type and energy of the particles released during the radioactive decay. Finally, they would measure how fast an element decayed. Decay speeds are described using the term half-life, which is the amount of time it takes for half of the initial radioactive element to decay into something else.

By the 1920s, physicists had discovered some radioactive substances with identical chemical properties but different half-lives. These are called isotopes. Isotopes are different versions of the same element that have the same number of protons in their nucleus, but different numbers of neutrons.

Uranium is a radioactive element with many isotopes, two of which occur naturally on Earth. These natural uranium isotopes decay into the element thorium, which in turn decays into protactinium, and each has its own isotopes. Hahn and his colleague Lise Meitner were the first to discover and identify many different isotopes originating from the decay of the element uranium.

All the isotopes they studied behaved as expected, except for one. This isotope appeared to have the same properties as one of the others, but its half-life was longer. This made no sense, as Hahn and Meitner had placed all the known isotopes of uranium in a neat classification, and there were no empty spaces to accommodate a new isotope. They called this substance “uranium Z.”

The radioactive signal of uranium Z was about 500 times weaker than the radioactivity of the other isotopes in the sample, so Hahn decided to confirm his observations by using more material. He purchased and chemically separated uranium from 220 pounds (100 kilograms) of highly toxic and rare uranium salt. The surprising result of this second, more precise experiment suggested that the mysterious uranium Z, now known as protactinium-234, was an already known isotope, but with a very different half-life. This was the first case of an isotope with two different half-lives. Hahn published his discovery of the first nuclear isomer, even though he could not fully explain it. 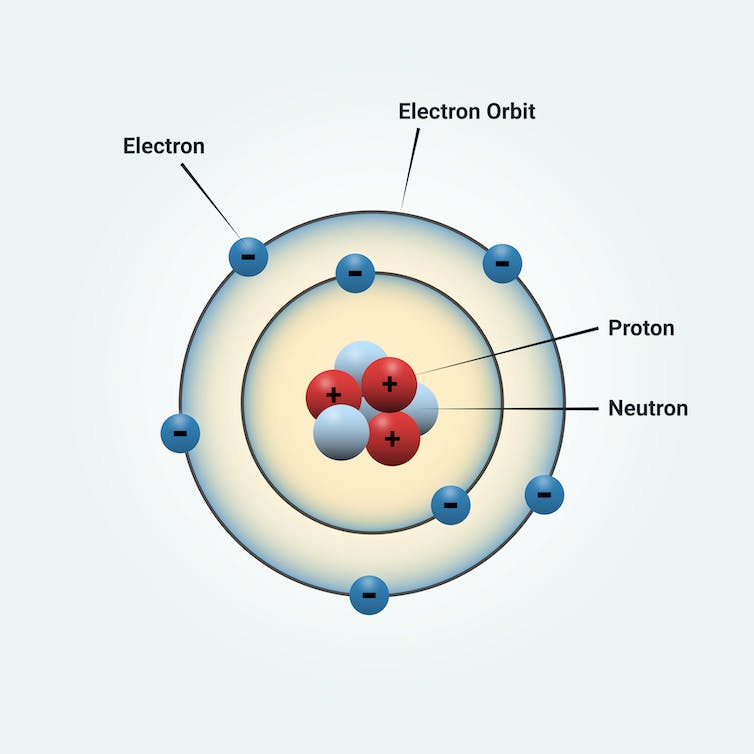 The discovery that the nucleus of an atom is made of both protons and neutrons allowed physicists to explain isotopes as well as uranium Z.

At the time of Hahn’s experiments in the 1920s, scientists still thought of atoms as a clump of protons surrounded by an equal number of electrons. It wasn’t until 1932 that James Chadwick suggested a third particle – neutrons – were also part of the nucleus.

With this new information, physicists were immediately able to explain isotopes – they are nuclei with the same number of protons and different numbers of neutrons. With this knowledge, the scientific community finally had the tools to understand uranium Z.

In 1936 Carl Friedrich von Weizsäcker proposed that two different substances could have the same number of protons and neutrons in their nuclei but in different arrangements and with different half-lives. The arrangement of protons and neutrons that results in the lowest energy is the most stable material and is called ground state. Arrangements resulting in less stable, higher energies of an isotope are called isomeric states.

At first nuclear isomers were useful in the scientific community only as a means to understand how nuclei behave. But once you understand the properties of an isomer, it’s possible to start asking how they can be used. 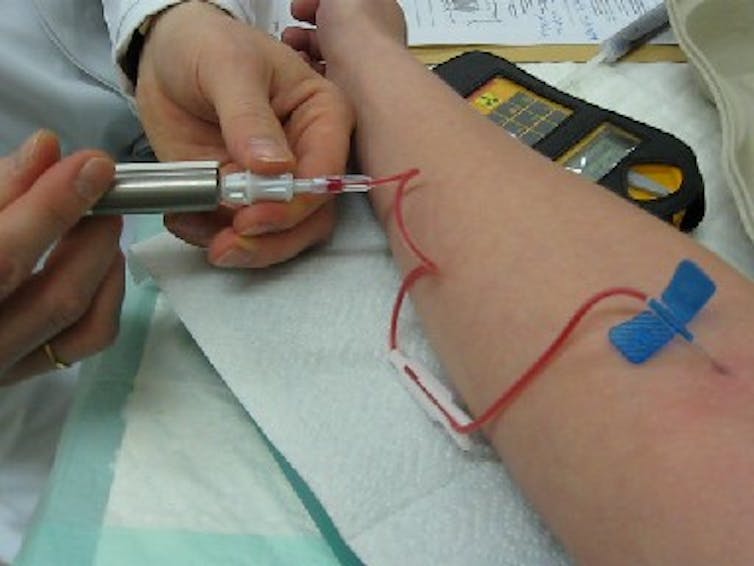 Technetium-99m is an isomer that is commonly used for diagnosing many diseases, as doctors can easily track its movement through the human body. This photo shows a medical professional injecting technetium-99m into a patient.

Isomers in medicine and astronomy

Isomers have important applications in medicine and are used in tens of millions of diagnostic procedures annually. Since isomers undergo radioactive decay, special cameras can track them as they move through the body.

For example, technetium-99m is an isomer of technetium-99. As the isomer decays, it emits photons. Using photon detectors, doctors can track how technetium-99m moves throughout the body and create images of the heart, brain, lungs and other critical organs to help diagnose diseases including cancer. Radioactive elements and isotopes are normally dangerous because they emit charged particles that damage bodily tissues. Isomers like technetium are safe for medical use because they emit only a single, harmless photon at a time and nothing else as they decay.

Isomers are also important in astronomy and astrophysics. Stars are fueled by the energy released during nuclear reactions. Since isomers are present in stars, nuclear reactions are different than if a material were in its ground state. This makes the study of isomers critical for understanding how stars produce all the elements in the universe.

Isomers in the future

A century after Hahn first discovered isomers, scientists are still discovering new isomers using powerful research facilities around the world, including the the Facility for Rare Isotope Beams at Michigan State University. This facility came online in May 2022, and we hope it will unlock more than 1,000 new isotopes and isomers.

Scientists are also investigating whether nuclear isomers could be used to build the world’s most accurate clock or whether isomers may one day be the basis for the next generation of batteries. More than 100 years after the detection of a small anomaly in uranium salt, scientists are still on the hunt for new isomers and have just begun to reveal the full potential of these fascinating pieces of physics.

This article is republished from The Conversation under a Creative Commons license. Read the original article.

Tesla Storing Thousands of Employees at an “Old Military Camp”…