Now Even NASA Wants to Talk About UFOs 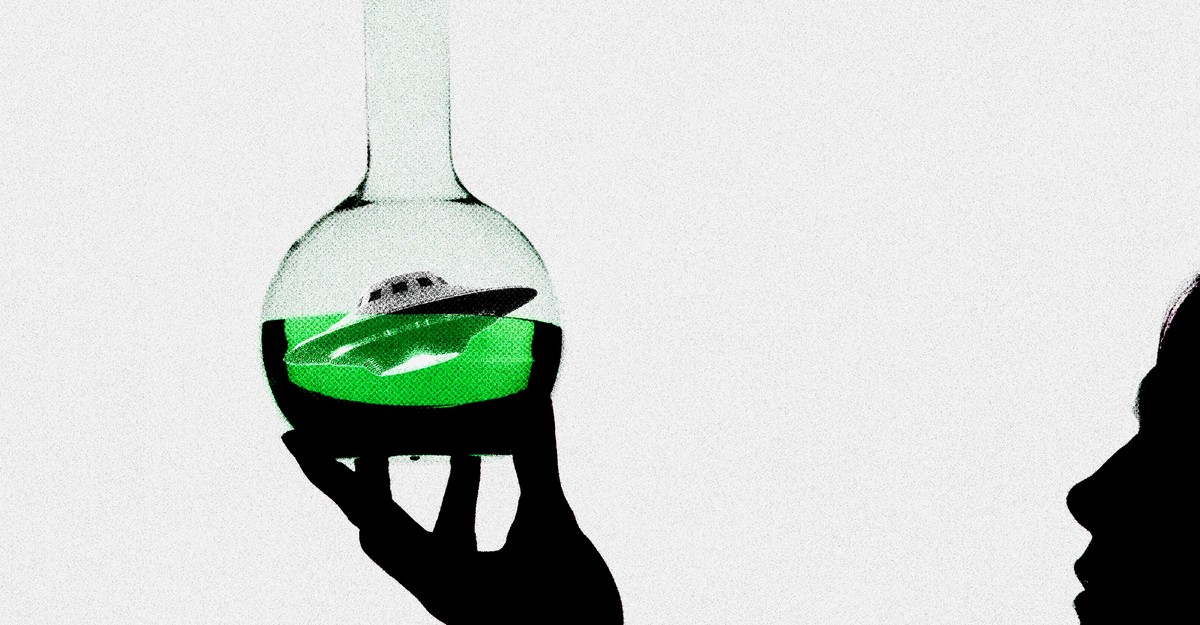 UFOs? After years of avoiding any serious discussion of such things, NASA is on it.

The space agency announced yesterday that it will form a team dedicated to studying unidentified aerial phenomena “that cannot be identified as aircraft or known natural phenomena.” Starting this fall, the team will examine existing data on these objects and brainstorm new ways to collect future data. All the work, which NASA expects will last nine months, will be done from “a science perspective.”

This is quite the turn of events. Sure, there may have been, in people’s mind, an association between the space agency and unidentified flying objects: The term UFO has been synonymous with alien spaceships since the day it was coined in the 1950s, and one of NASA’s missions is to find signs of life beyond Earth. But today’s announcement marked the first time that NASA has waded so publicly—and this meaningfully—into the broader UFO discussion in the agency’s 64-year history. Not only has NASA changed its approach to reports of mysterious sightings in the sky, but it will build a UFO research team led by a respected astrophysicist and have public meetings about its results.

“We have the tools and teams who can help us improve our understanding of the unknown, and we are prepared to use these powerful tools of scientific discovery in this case,” Thomas Zurbuchen, NASA’s associate administrator for science missions, told reporters in a press conference. “Unidentified phenomena in the atmosphere are of interest for many reasons. Frankly, I think there’s new science to be discovered. And there’s been many times where something that looked almost magical turned out to be a new scientific effect.”

As NASA itself said today, there is still no evidence that UAPs (the government’s preferred term, meaning “unidentified aerial phenomena”) have alien origins; the agency is much more interested in looking for life deep in the solar system and well beyond. So why take such a formal interest now? For the same reason, it appears, that American lawmakers recently held the first congressional hearing about UAPs in 50 years: Everyone is talking about them. After The New York Times published a story in 2017 about a secret Pentagon program devoted to cataloging UAPs, lawmakers asked the Defense Department and U.S. intelligence agencies in 2020 to compile a report on all of their UAP data. The following summer, as the government prepared to release this highly anticipated report, a reporter asked Bill Nelson, the NASA administrator, what the agency was doing about UAPs. Nelson, a former senator who was privy to classified information, said he’d talked with pilots who had spotted UAPs and were convinced they’d seen something that merited investigation. “So I have talked to [Zurbuchen] about what specifically we could do from a science perspective, in addition to an intel perspective, to try to bring any additional light to this,” Nelson said in 2021.

What exactly is the “science perspective” or the “new science” NASA hopes to unwind? David Spergel, the astrophysicist leading the new team, said in a statement that the group’s first task is to “gather the most robust set of data that we can,” including existing data “from civilians, government, non-profits, companies.” Zurbuchen, in a presentation to the National Academy of Sciences, Engineering, and Medicine today, suggested that the group would also consider data from astronomy and Earth-observation missions. “We are looking at the sky all the time. We are looking at Earth all the time,” Zurbuchen said. “What types of scientific data currently collected and archived by NASA or civilian government entities should be set aside and analyzed?” And what new data should NASA gather to help understand the nature of UAPs?

NASA leadership is aware of how all of this sounds. Zurbuchen said that a dedicated UAP-research effort poses a “reputational risk” for the agency. “It’s clear that in a traditional type of science environment, talking about some of these issues may be considered selling out or talking about things that are not actual science,” Zurbuchen told reporters. “I just really vehemently oppose that.”

This is indeed unusual ground for NASA, an agency that has spent years trying to gently counter claims that the moon landings were faked. A scientist who works on a spacecraft currently orbiting the moon once told me that she carries pictures taken by the robotic mission of the Apollo landing sites, just in case she runs into a nonbeliever. The agency also took pains to set the record straight after Buzz Aldrin, the second man to walk on the moon, said in a television interview in 2005 that the Apollo 11 crew had seen unidentified objects on the way to the moon. The raised eyebrows that followed nearly hit the stratosphere. Some UFO believers thought Aldrin had intentionally withheld this information. But NASA had cracked the mystery back in 1969, and the culprit wasn’t alien: It was the sunlight reflecting off the panels of their spacecraft. NASA had just never made those details public—which Aldrin didn’t realize.

Surely the agency must understand that, even now, raising the subject of UAPs means treading carefully between national-security concerns and more, shall we say, creative theories. Unfortunately, NASA leadership is already wandering off the safest path through. The officials today said that the new UAP-research work is unrelated to NASA’s programs to find alien life beyond Earth but spoke of both efforts in the same breath. Zurbuchen even opened the press conference by talking up the very real ways NASA is searching for extraterrestrial life: A rover is currently looking for fossilized microbes buried in the surface of Mars. One NASA telescope is trying to discover new exoplanets, and another will soon peer into their atmosphere, searching for molecules associated with life. The space agency is planning to send a probe to a moon of Jupiter with an entire ocean beneath its icy crust. NASA is even serious about searching for signs of technologically advanced civilizations out there. And when officials discuss UAPs alongside their other search-for-alien-life programs, they’re planting a seed in people’s mind. Even as they assert that there’s no extraterrestrial explanation for UAPs, they lend credence to the claim that some connection exists.

NASA said today that in addition to “the science interest” surrounding UAPs, the agency is concerned with the safety of aircraft in our skies. Fair enough: The first A in NASA stands for aeronautics, after all. But today’s announcement came from NASA’s science department, not the aeronautics division, and so will the funding for this effort. And the work will be led by a Princeton theoretical astrophysicist whose interests, according to his academic bio, range from “the search for planets around nearby stars to the shape of the universe”—a much dreamier ambition than aircraft safety. On a very basic level, NASA now has to take UFO claims seriously—and anyone with a new sighting to report will know that.

The modern UAP story has been populated by quite an ensemble: lawmakers, defense officials, UFO activists, the Blink-182 rock star Tom DeLonge. Now the cast includes the world’s top space agency and its arsenal of sophisticated telescopes and space probes. NASA officials said they would make all of their findings available for anyone to see. No secrets! But that doesn’t mean that NASA will be able to control the public narrative surrounding this effort, or any discoveries. Once NASA starts talking about UFOs—well, like it or not, it’s a whole different conversation.

Opinion: It is often said that politics are a pendulum.…

Lawsuit Claims That 3D Printer Caught Fire and Killed a…