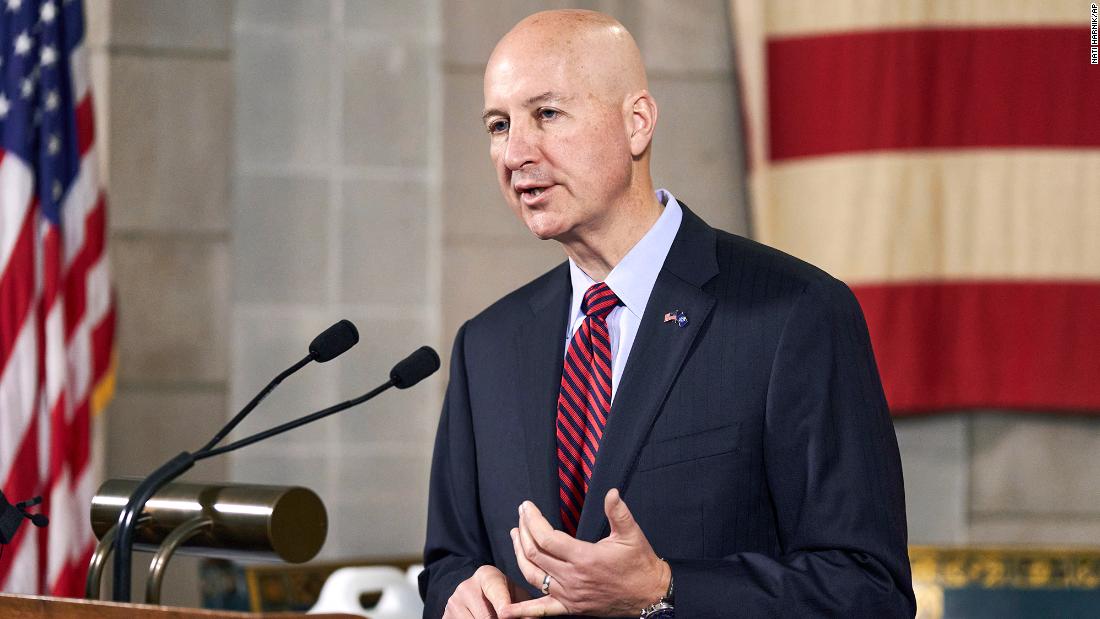 “Nebraska is a pro-life state. I believe life begins at conception, and those are babies too,” Ricketts told CNN’s Dana Bash on “State of the Union” when asked if he thought the state should require a young girl who was raped to carry the pregnancy to term. “If Roe v. Wade, which is a horrible constitutional decision, gets overturned by the Supreme Court, which we’re hopeful of, here in Nebraska, we’re going to take further steps to protect those preborn babies.”
“Including in the case of rape or incest?” Bash asked. To which the governor replied: “They’re still babies, too. Yes.”
Ricketts said that in case Roe falls, “I will work with our speaker of the legislature to work on a special session and do more to protect preborn babies. We’ll have to wait and see what that decision is before we can take further steps, but that would certainly be my intention.”
The governor’s comments come as the Supreme Court’s conservative majority seems likely to overturn Roe v. Wade, the landmark 1973 case that legalized abortion nationwide. Earlier this month, a leaked draft opinion authored by conservative Justice Samuel Alito indicated that the court was poised to reverse Roe in a case concerning a Mississippi abortion law that would ban abortion at 15 weeks of pregnancy.
More than a dozen states have so-called trigger laws on their books, meaning that abortion will almost immediately be banned if Roe v. Wade is no longer in effect, and Nebraska nearly passed its own such law last month.
The state’s unicameral legislature failed to advance a bill entitled the Nebraska Human Life Protection Act, which would have banned abortions without exceptions for rape and incest and would have created criminal penalties for physicians who violate the law. The measure would’ve gone into effect if the Supreme Court overruled Roe or if Congress were to enact a law giving states the authority to regulate abortion or if the Constitution were to be amended.
Republican state Sen. Joni Albrecht’s motion to end debate on the bill she introduced failed by a vote of 31-15, falling short of two votes needed. Lawmakers had debated the bill for about eight hours.

‘Nebraskans look to their own’

Ricketts, who is term-limited as governor, also weighed in on last week’s Republican primary in the race to succeed him, a contest that saw his pick beat former President Donald Trump‘s choice.
Ricketts supported University of Nebraska Board of Regents member Jim Pillen, while Trump backed businessman Charles Herbster, who is facing allegations of sexual misconduct by eight women. Herbster has denied the allegations.
“At the end of the day, I think voters in individual states, and it’s certainly true here in Nebraska, they make their own decisions,” Ricketts told Bash. “You know, people outside the state can have an influence, but at the end of the day, Nebraskans look to their own and Nebraskans made a decision they wanted for their state.”
Ricketts plans to travel to Georgia this week to campaign on behalf of GOP Gov. Brian Kemp, who faces a primary challenge from former US Sen. David Perdue. Trump has endorsed and vigorously supported Perdue in an attempt to get back at Kemp for refusing to help him overturn his defeat in 2020.
“As co-chair of the Republican Governors Association, we’ve been very clear that we support our incumbents. Brian Kemp is a great incumbent, he’s done a fantastic job in Georgia,” Ricketts said.
Trump’s vice president, Mike Pence, is also expected to campaign for Kemp before the state’s May 24 primary.
CORRECTION: This story has been updated to correctly reflect Ricketts’ comments on “preborn babies.”
This story has been updated with additional information and reaction.

CNN’s Veronica Stracqualursi and Chandelis Duster contributed to this report.

Jim Nowlan | What does bankrolling billionaire Griffin want from…