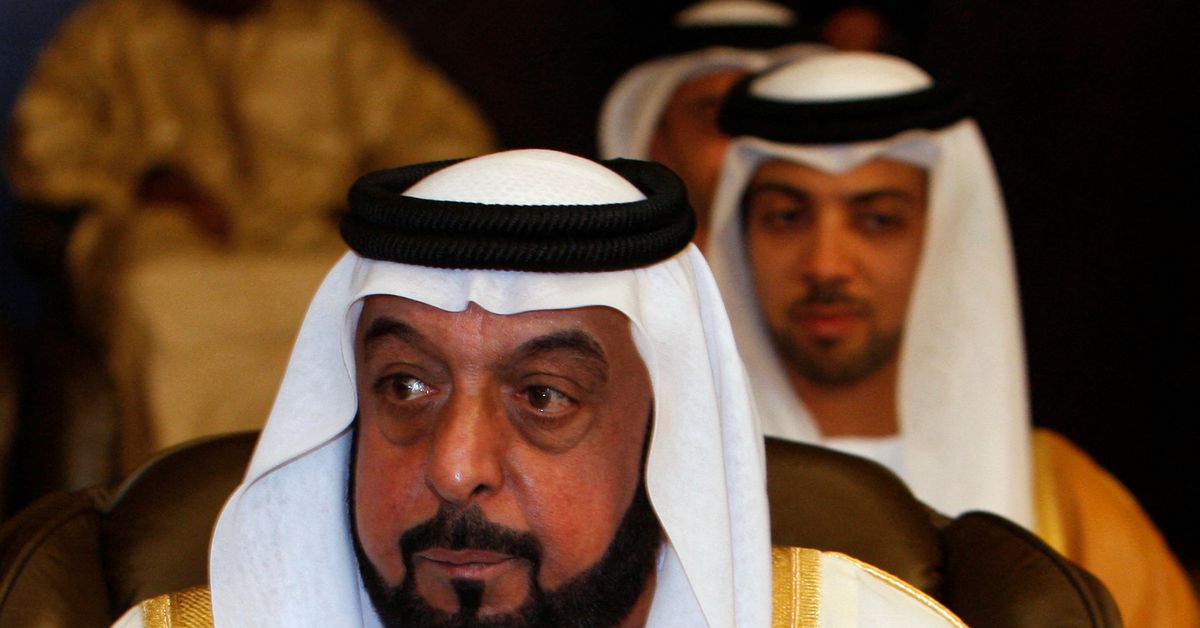 DUBAI, May 13 (Reuters) – Sheikh Khalifa bin Zayed al-Nahyan, who died on Friday, was a pro-Western moderniser whose low-key approach helped steer the United Arab Emirates through a tense era in regional politics by aligning the Gulf oil producer closer with Washington and its allies, including Israel.

Khalifa, who was born in 1948, had been ruler of the richest emirate, Abu Dhabi, and UAE president since the death of his father, Sheikh Zayed bin Sultan al-Nahyan, in 2004 but had rarely been seen in public since suffering a stroke in 2014.

Since then, he had continued to hold ceremonial powers but had allowed his half-brother, Abu Dhabi Crown Prince Mohammed bin Zayed, to hold the true reins of power. The UAE has pursued a hawkish foreign policy against Iran and Islamist groups and, in a strategic realignment of Middle East countries against Iran, forged formal ties with Israel two years ago.

Khalifa lacked the charisma of his late father, who united the country’s seven emirates into a federation in 1971.

But his personable nature and subtle approach helped maintain the ruling family’s ties with important clans and leaders of other emirates during the fall-out from a debt crisis in Dubai in 2009 and a tense era in regional politics.

The eldest of his father’s 19 sons, Khalifa was a careful financial manager who was keen to further modernise the UAE, an OPEC oil producer. Even before Zayed’s death, he had long played a pivotal role in running the UAE due to his father’s illness and focus on foreign affairs.

Khalifa had led the Supreme Petroleum Council, which sets oil policy, and the sovereign wealth fund Abu Dhabi Investment Authority, believed to control an estimated $700 billion in global assets. Both are powerful positions that he held as crown prince for 35 years, grooming him for leadership.

Khalifa grew up before the 1970s oil boom flooded the UAE with the petrodollars that turned it into a regional economic powerhouse.

Abu Dhabi is the political capital, by virtue of its immense oil wealth, while Dubai, under the leadership of the al-Maktoum family, is the Gulf’s business and tourism hub.

It was on Khalifa’s watch that the UAE, a grouping of sheikhdoms that emerged five decades ago from British colonial tutelage, witnessed a subtle shift in its political landscape as the federation became more centralised under Abu Dhabi guidance.

UAE rulers faced the delicate question in 2009 of how to handle the financial troubles in Dubai as the global economic crisis took hold. Abu Dhabi bailed it out with $20 billion in financing to avoid debt defaults.

Dubai expressed its gratitude by switching the name of its tallest skyscraper from Burj Dubai to Burj Khalifa in a reflection of the political realities.

The UAE joined a U.S.-led coalition against Islamic State in Syria and took a leading role in a Saudi-led alliance that intervened in Yemen’s war in 2015 against the Iran-aligned Houthi movement, deploying Emirati troops on the ground.

Abu Dhabi firmly backed international sanctions against Iran in 2012 over its nuclear energy programme despite the emirate’s traditional role as a trade hub for Iran.

This eased the way for the UAE to pursue plans to develop its own civilian nuclear energy with international oversight and Washington’s blessing. It also spent billions of dollars in arms, mainly from the United States, to shore up its defences.

The United States brokered the deal that led to the establishment of ties with Israel in September 2020. Bahrain also forged ties with Israel the same day, and Sudan and Morocco quickly followed suit.

Despite limited opportunities for political participation, the country’s oil wealth and developmental push staved off the kind of popular Arab uprisings that ousted leaders in Egypt and Tunisia in 2011.

Members of the country’s Federal National Council, designed as a quasi-parliamentary body, are chosen by a mixture of appointment and elections – to which only a small fraction of the local population are eligible to vote. It has no legislative authority.

The UAE prides itself on its political and economic stability, mindful that its ruling families have a history of bloody succession crises before the federation came together.

The UAE has deflected criticism from rights groups over the detention of what they call political prisoners, citing national security as a red line.

In 2010 Abu Dhabi oversaw a smooth transfer of power in the poorest emirate, Ras al-Khaimah, when veteran ruler Sheikh Saqr bin Mohammed al-Qassimi died. His son Sheikh Saud took over despite the objections of his brother, a former crown prince deposed by his father in 2003.

The UAE, a country of less than 10 million people, has one of the world’s highest per capita incomes and is home to millions of expatriate workers who make up the bulk of the workforce.

Bennett says he expects PA’s ‘full cooperation’ in probe of…

Mike Pence to defy Trump and campaign with Georgia governor…