Miera declines to take mandatory political leave due to wildfire 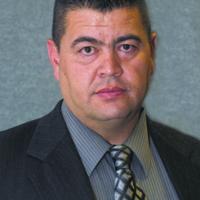 Steve Miera, Democratic candidate for Taos County sheriff and current undersheriff, said he has not taken the required 30-day leave from the job prior to the election, which he acknowledged may be a violation of the federal Hatch Act. The act prohibits civil service employees from engaging in certain forms of political activity. Miera said he chose to stay on call because of the ongoing Calf Canyon-Hermits Peak Fire.

Meira said he is aware that the violation could prohibit the sheriff’s office from receiving federal grant funding, which he said currently does not benefit the office. He said he is not currently going into the office to perform his regular duties and said he is “in good faith, trying to take the 30 days off.”

However, he said the ongoing threat of the Calf Canyon–Hermits Peak Fire has caused him to forgo his time off. “When it comes to the fire itself in my community, I’m the undersheriff first. My community comes first before my candidacy,” he said.

“The ramifications [of the violation] would be that the agency or the department would lose federal funding, which [Sheriff Jerry Hogrefe] is okay with, because we don’t receive any federal funding.”

Miera reiterated that the sheriff’s office does not receive federal grant money currently.

He said all funding comes primarily from the state and county level, and that any federal funds the office does receive are due to contractual partnerships with various federal agencies, including the Bureau of Land Management and the U.S. Forest Service, which are not affected by the act.

Miera said it has taken some back and forth with the county to figure out whether his continuation of service due to the fire is in fact a violation of the act. “We were never able to get a clear determination,” he said. “Because I’m an appointed official, because I don’t accrue leave and I don’t get overtime… I had to figure out if the Hatch Act actually applied to me.”

He said that for the sake of the act, he would do his best to stay hands-off. “Minus the fire, I was like, ‘Okay, I’ll just step away for the 30 days just to prevent there being any problems,’” he said.

Taos County Sheriff Jerry Hogrefe also said that there were “a couple of times” where he needed Miera’s assistance in the past week, but clarified that “he’s not in the office. He’s not attending any kind of day-to-day.”

“Regarding Undersheriff Miera, the County is in the process of working with the Undersheriff to ascertain his compliance [with sections of the Act]. Because this is a confidential personnel matter being reviewed, the County cannot comment further until it has completed its review,” said Jaramillo. However, he added that due to the immediacy of the concern, they will complete their review “quickly.”

“If an employee is cleared to remain employed while running for office by the Special Counsel’s Office, the employee must take a leave of absence for the 30 days prior to an election under Paragraph E,” Jaramillo said.

Inquiries to the New Mexico Secretary of State office were not answered as of press time.

Elon Musk plans to ‘vote Republican’ and warns of political…

Life on Mars died out more than 1.3 billion years…