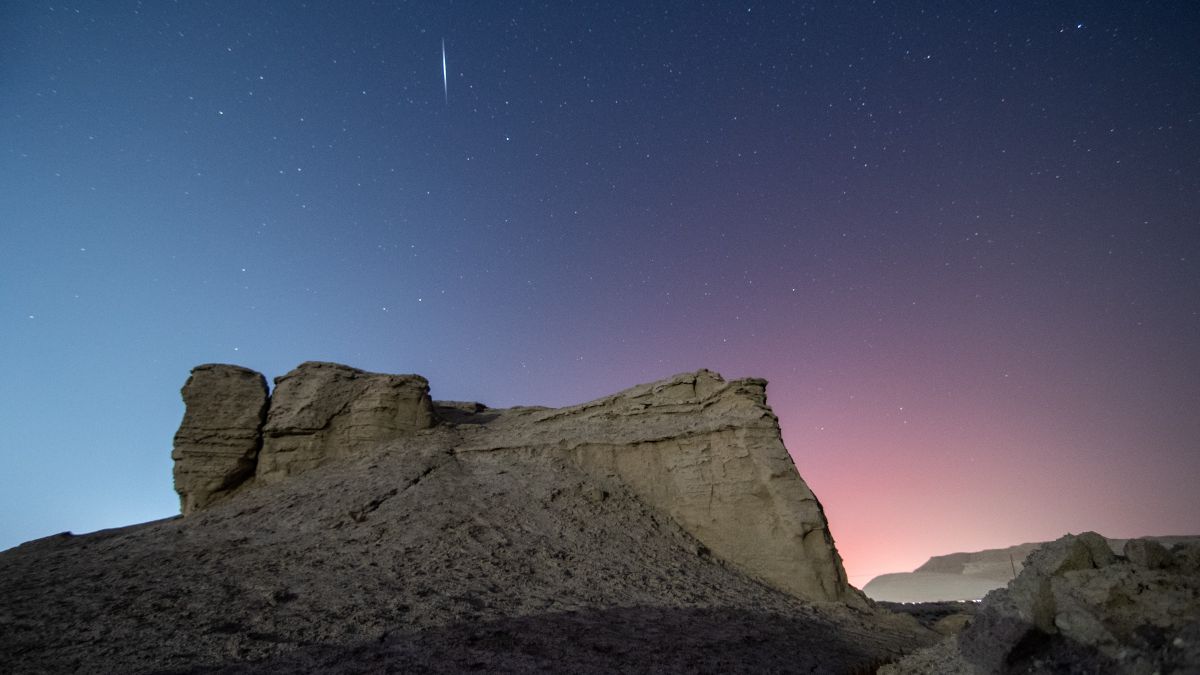 “Shooting stars” from the tau Herculids meteor shower may be visible late this month, but you might want to listen for them instead.

Excitement among meteor enthusiasts is building as we get closer to the much-anticipated meteor outburst that might be produced by a concentrated trail of dusty debris from the nucleus of comet Schwassmann-Wachmann 3 (SW 3) late Monday night into early Tuesday morning (May 30 to 31).

Even if you can’t get a good view of the show because of clouds or light pollution, you can “observe” the meteor shower a different way: by listening to it on the radio!

Under certain conditions, meteors can reflect radio waves in the same way the ionosphere propagates transmissions between widely separated ham-radio operators. The ionosphere usually reflects frequencies below 30 megahertz (MHz), but it’s transparent to higher frequencies, such as the FM broadcast band (88 to 108 MHz).

Such high-frequency (short-wavelength) radio signals generally pass unimpeded through the atmosphere in straight lines; they cannot follow the curvature of the Earth to reach a listener beyond the horizon. Yet when certain layers of the upper atmosphere become ionized, they can reflect the signals back to the ground far away. The lowest such layer, 60 to 70 miles (96 to 112 kilometers) up, is called the E layer of the ionosphere, and that’s the altitude where most meteors are seen.

So, as a meteoroid vaporizes as it passes through Earth’s atmosphere, it briefly ionizes air molecules along its path. Forming an expanding column or cylinder several miles or more in length, these ions can scatter and reflect radio waves, in much the same way a high-altitude jet reflects sunlight and leaves a glowing contrail against the darkening sky after sunset. But because the ion trails disperse rapidly, the reflected radio waves generally last only a few seconds.

Tiny particles tend to vaporize at the bottom of the E layer. Large particles, in contrast, begin to flame higher up. And predictions for the particles shed from comet SW 3 suggest that a majority of these will be large. Such meteors produce longer-lasting ionization, and because they start to “flame on” higher up, they can reflect signals from more distant transmitters.

On the ground, the meteor’s presence is signaled by the momentary enhancement of FM reception from a distant station.

How to listen for meteors on the radio

For this radio method to work, find a frequency where no nearby FM station is broadcasting.  You will have a better chance of success by scanning the low-frequency end of the FM band, below 91.1 MHz. Why there? Because that’s where the lower-power stations, chiefly run by colleges, are found, and they’re usually free from local interference from the high-power commercial stations. In fact, unless you live in a very unpopulated region of the country, your chances of finding an open frequency free of interference above 91.1 MHz is rather small, so you’ll need to tune to a distant station on a clear frequency below 91.1 MHz.

FM Atlas, published from 1970 to 2010, provided listings of all FM stations in North America, with the unique feature of frequency-by-frequency maps. Bruce Elving, publisher of the FM Atlas, was a longtime proponent and expert in all things FM. He died in 2011, but as a tribute to his love and dedication to FM radio, the 21st and final edition of FM Atlas (2010) is available for free, courtesy of AmericanRadioHistory.com. You can also see a complete listing of AM and FM stations in the 2010-2011 edition of the M Street Directory.

Normally, when you’re tuned in to an “empty” radio frequency, you just hear a hissing noise. But as meteors zip through the atmosphere, a distant or silent station will abruptly “boom in” for anywhere from a fraction of a second to several seconds. You might also hear what initially sounds like a “pop” or a whistle, and then as the ionization trail dissipates, the station will quickly fade away. Because of their height, meteors best reflect signals from stations 800 to 1,300 miles (1,300 to 2,100 km) from you.

When should you listen for meteors?

The best time to listen is when the radiant is 45 degrees above the horizon as seen from a point midway between you and the transmitter. At the predicted peak time for Tuesday morning’s potential meteor outburst, parts of Maine and the Canadian provinces of New Brunswick, Nova Scotia and Prince Edward Island will have the radiant close to that preferred altitude, while eastern New York, New England and southern Quebec will not be far behind, at about 50 to 55 degrees.

Also, it is best to tune to a station located in a direction perpendicular to the radiant. Because the SW 3 radiant will be near the brilliant orange star Arcturus in the constellation Boötes, which will be toward the western part of the sky, the better listening directions will be to the north and south of you.

Most meteors are heard but not seen

If you are watching for meteors while monitoring your radio, most of the time, you will hear a “ping” of reception, but you won’t see a corresponding meteor streak in the sky. Recall that most of the meteors you hear are roughly halfway between you and the radio station — about 400 to 650 miles (650 to 1,050 km) away. So they are occurring either near the horizon or just below it. Back in the 1970s, members of the Nippon Meteor Society in Japan who made extensive records of radio meteors noted that only 20% to 40% of meteors heard on the radio were simultaneously observed visually.

What if you can’t find a clear frequency?

Particularly in large metropolitan areas, finding a clear or empty FM frequency may be all but impossible, even below 91.1 MHz. In many ways, finding a clear frequency seems to go hand in hand with trying to find a dark sky free of light pollution. You’ll probably have a much better chance in rural or country locations.

But if you can’t find a clear FM frequency, don’t despair. You can still listen for meteors on livemeteors.com. A Yagi antenna in the Washington, D.C., metro area constantly detects 55- or 61-MHz analog TV signals in Ontario reflected off of meteor trails. When a meteor passes over — ping! — there is an echo. It’s the next best thing to having free access to a giant government radar!

Someone’s Selling NASA Moon Dust That Got Eaten By Cockroaches