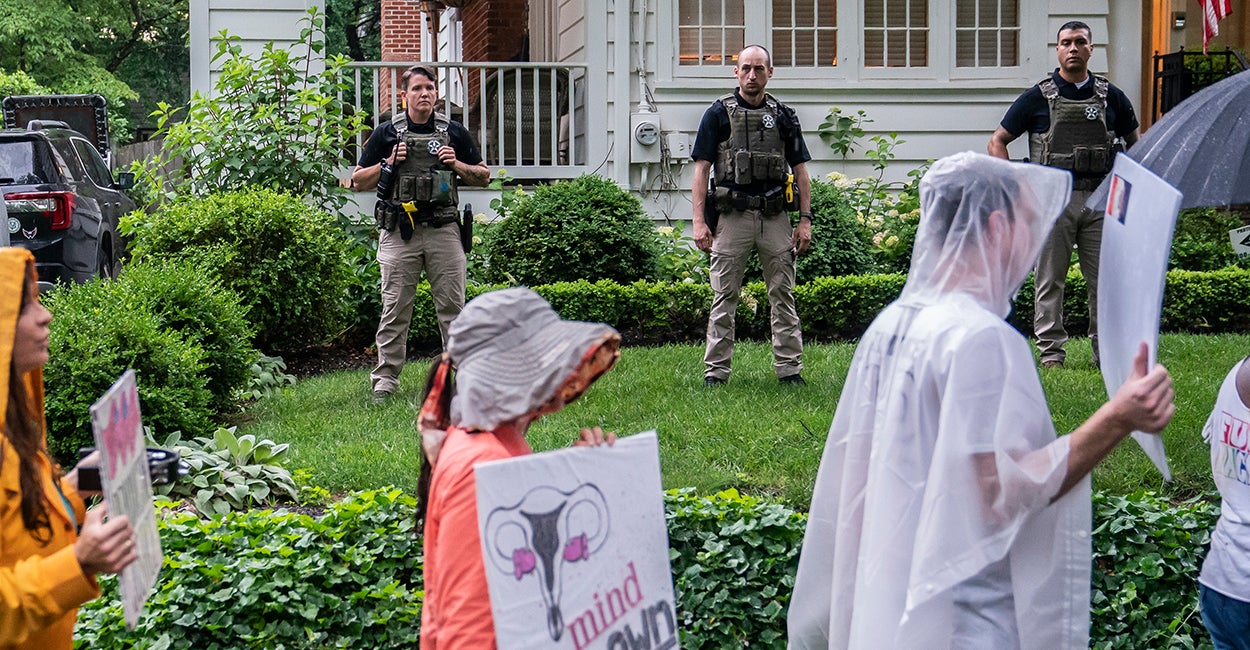 In the still dark hours of Wednesday morning, a man armed with a gun, a knife, and burglary tools was arrested outside Supreme Court Justice Brett Kavanaugh’s home. The man told police that he had come to kill Kavanaugh because of the leaked draft opinion in Dobbs v. Jackson Women’s Health Organization that could potentially overturn Roe v. Wade.

Violence by deranged lunatics is a predictable reaction to superheated political rhetoric.

Beginning with Democrats’ shameful conduct during Kavanaugh’s confirmation hearings, they have attempted to demonize him and gin up anger within their political base about him and the court generally. When protesters at his hearings broke Capitol Police barricades, stormed the steps of the Capitol, and broke through a police line around the Supreme Court, Democrats did not rebuke them.

That was just the beginning. In 2020, when the court confronted another abortion case, then-Senate Minority Leader Chuck Schumer, D-N.Y., threatened Kavanaugh and Justice Neil Gorsuch directly, shouting to a mob outside the court: “I want to tell you, Gorsuch. I want to tell you, Kavanaugh. You have released the whirlwind. And you will pay the price. You won’t know what hit you if you go forward with these awful decisions.”

The rhetoric escalated until protesters started showing up at the homes of Supreme Court justices. Now, Democratic politicians have quieted down some but not because they oppose these protests. Rather, they have quieted down because, having roused the rabble to action, they seem content to sit by and watch it roil forward under the angry steam they built up.

Although it is a crime to protest outside a judge’s house, U.S. Attorney General Merrick Garland won’t enforce the law. President Joe Biden refuses to condemn protesters targeting justices’ homes. House Speaker Nancy Pelosi, D-Calif., won’t move legislation to fund security for the justices and their families. Even Judge Ketanji Brown Jackson refused to condemn the protests outside her soon-to-be colleagues’ homes.

Their present silence is just as blameworthy as their initial instigation. Perhaps even more so now that there was an attempt on a justice’s life and a firebombing of a crisis pregnancy center in Buffalo, New York.

How can we look at Democrats’ collective shrug and conclude anything other than that they don’t particularly care that justices are in mortal danger?

Democrats themselves have made this point about Republicans. Rep. Alexandria Ocasio-Cortez, D-N.Y., has made it on several occasions. So has former Rep. Beto O’Rourke, D-Texas, among many others. But of course, when violence is committed by people on the left—as in the case of the congressional baseball shooting or the shooting at a U.S. Immigration and Customs Enforcement facility—that talking point quietly disappears.

It has always been clear that Democrats do not care about the conservative justices’ personal lives, well-being, or families. They were happy to attempt to personally destroy Kavanaugh and Justice Amy Coney Barrett and her family. They did the same to Justice Clarence Thomas so many years ago and have never stopped. They have done the same to other conservative judges. Even—in some cases—opposing them because of the color of their skin.

Democrats have no qualms about the politics of personal destruction. They may have qualms about the politics of physical destruction, although they’re awfully quiet about it. In the minds of deranged lunatics like Kavanaugh’s would-be assassin, however, the line between the two is thin—and made blurry by the anger Democrats incited and now refuse to rein in.

Have an opinion about this article? To sound off, please email letters@DailySignal.com, and we’ll consider publishing your edited remarks in our regular “We Hear You” feature. Remember to include the URL or headline of the article plus your name and town and/or state.