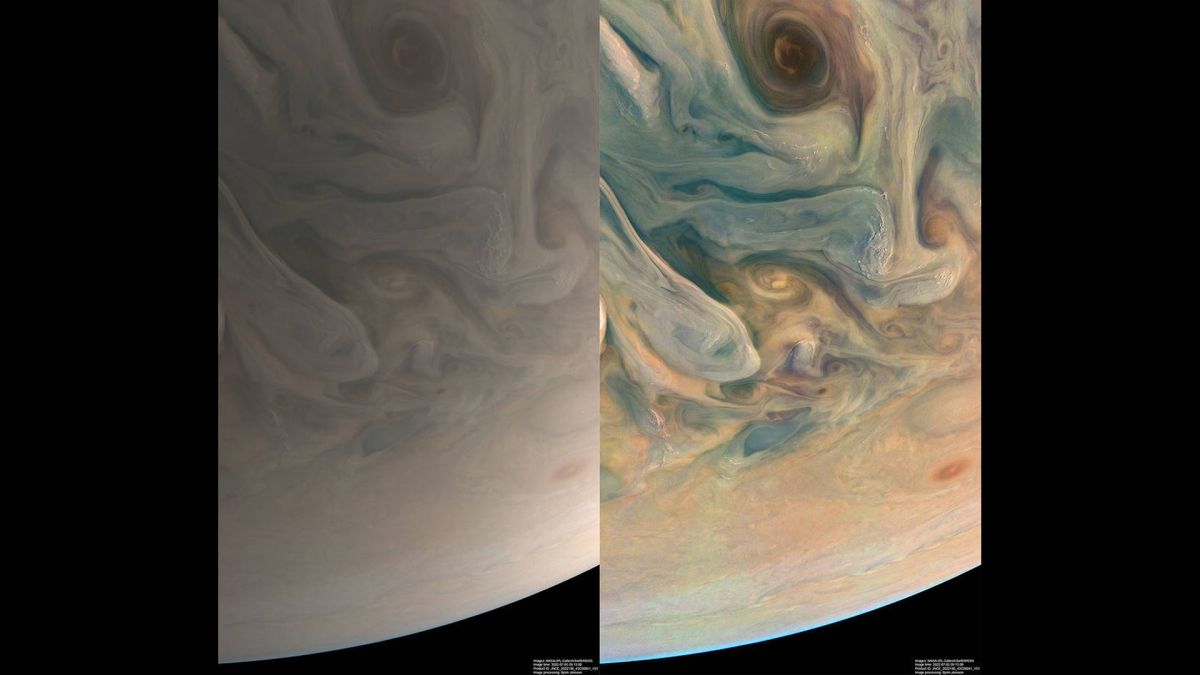 A new image captured by NASA’s Juno Jupiter explorer reveals features in the turbulent atmosphere of the solar system’s largest planet in the same colors a human observer would see them.

Citizen scientist Björn Jónsson processed the raw data from Juno to create two images. The image on the left hand side shows the view as it would appear to a human observer in Juno’s position. In the image on the right, Jónsson digitally enhanced color saturation and contrast, allowing the intricate structure of the planet’s atmosphere to come to the fore.

The color differences in the enhanced image reflect variations in the chemical composition of different parts of Jupiter’s atmosphere and reveal the three-dimensional nature of the powerful storms that swirl in the planet’s clouds. The bright “pop-up” clouds in the higher atmosphere are also visible. The image captures a region at a latitude of about 50 degrees north.

Juno, launched in 2011, has been exploring the gas giant since 2016. Circling the planet in a highly elliptical orbit, the probe completes one lap every 43 days, making regular dips close to the planet’s whirling clouds. At its closest, Juno dives down to about 3,100 miles (5,000 km) above the gas giant’s clouds.

Originally scheduled to retire in 2021, Juno will continue its work until at least 2025. JunoCam images are open to citizen scientists to explore, process and help categorize. The images are available on the JunoCam image processing website (opens in new tab) via the Southwest Research Institute in San Antonio, which built the instrument.

U.S. export ban on some advanced AI chips to hit…

Water on the moon is present even outside of dark…