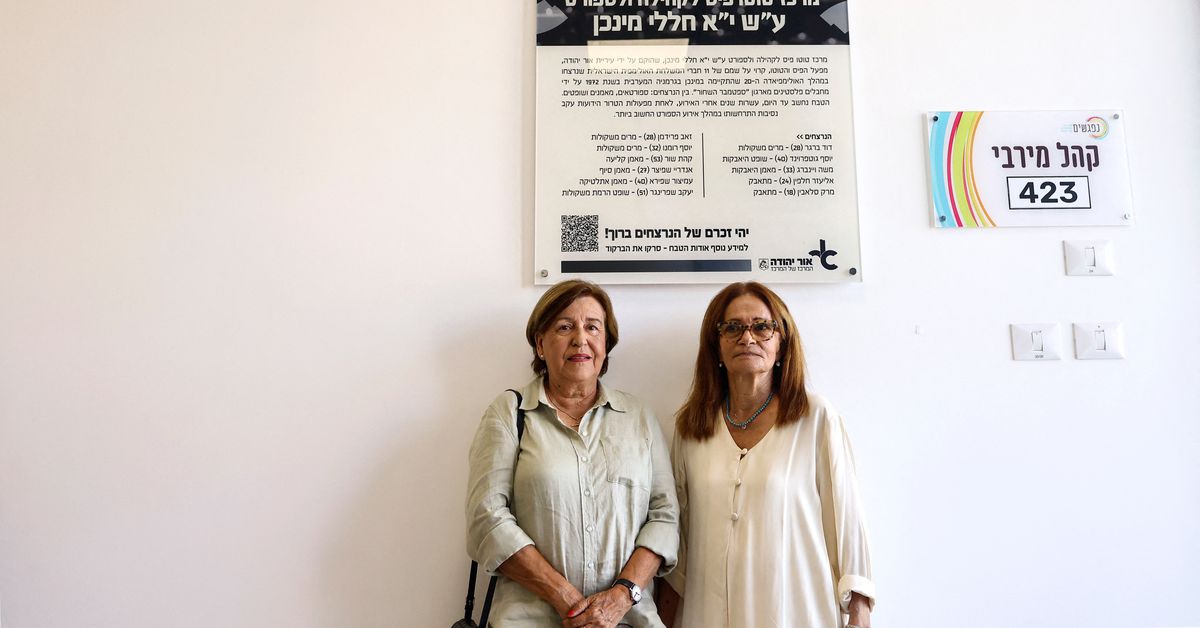 JERUSALEM, Sept 4 (Reuters) – Ankie Spitzer was 26 years old when her husband Andre, a coach of the Israeli fencing team, was killed by Palestinian gunmen at the 1972 Munich Olympics, 50 years ago this week, and the memories of that day have dominated her life ever since.

The attack on the Israeli team by gunmen associated with the Palestinian militant group Black September shocked the world, playing out in large part on live television watched by millions of viewers.

At the end, 11 members of the Israeli team were dead as well as one German police officer and five of the Palestinian gunmen. German and Olympic authorities faced bitter criticism for their response to the attack.

“I was only married one year and three months to Andre, we were a young couple, very much in love with a small baby, you know, we were on top of the world,” Spitzer told Reuters ahead of a ceremony in Germany this week commemorating the massacre.

“I was with him at the Olympics, and I was in the room after they were murdered, just a few hours afterwards, and I looked around, everything was with blood,” she said.

“I said to myself…if they can do this I will never shut up, I will never stop talking about it, only for one reason, so that this will never ever happen again.”

When the militants infiltrated the poorly defended Olympic Village in the early hours of Sept. 5, 1972, and broke their way into the Israeli apartments, it was the start of a bloody 24-hour standoff which began with a struggle between the gunmen and unarmed athletes who tried to defend themselves.

Ankie Spitzer and Ilana Romano, widows of Israeli athletes Andre Spitzer and Joseph Romano, stand by a placard during the inauguration ceremony of a sports centre dedicated to the memory of 11 Israeli athletes who were murdered in Munich 1972 olympic games Palestinian attack, ahead of the 50th anniversary commemoration of the massacre in Munich, Germany, at Or Yehuda, Israel August 28, 2022. REUTERS/Ronen Zvulun

The attackers demanded the release of more than 200 Palestinians held in Israeli prisons as well as that of the German Red Army Faction radicals Andreas Baader and Ulrike Meinhof and a plane to the Middle East.

After one rescue attempt was called off when police realized it was being broadcast on live television, German authorities subsequently agreed to take the attackers and a number of hostages to the airport.

A further rescue attempt also failed with a firefight breaking out at Furstenfeldbruck Air Base, which finally ended when the surviving gunmen were captured.

Along with other relatives and survivors, Spitzer had initially refused to attend Monday’s ceremony in Munich, angered by what they considered derisory compensation offers from Germany, until a 28 million euro ($28 million) settlement was reached last week. read more

Israeli President Isaac Herzog will attend the ceremony in Munich on Monday with German leaders including President Frank-Walter Steinmeier but for those who lived through it, the scars will not fade.

“For me the 1972 trauma will remain,” said Ilana Romano, whose husband Joseph, a weightlifter, was another of the athletes killed in the attack.

“I hope that the world better understands and is ready to do more, and the most important thing is not to support terror and understand that terrorism destroys every good thing.”

Rich Warren | Library may be the best entertainment bargain