Iraq in political deadlock as it grapples with democracy

Since last October’s elections, Iraq has been without a government because politicians can’t manage to form a coalition. That’s not uncommon in democracies. But is it positive for Iraq, or will it become dangerous?

In a few days, Iraq will probably break a record. But it’s not necessarily something for the country to be proud of. Iraq has now been without an official government for just over 200 days.

Although the Middle Eastern nation isn’t close to breaking the world record for the longest period without an elected government — that’s held by Belgium, with well over 500 days — the last time this happened in Baghdad was in 2010, and the record for Iraq back then was 208 days.

Why is it taking so long?

Iraq’s last federal elections were held on October 10, 2021, and results were officially ratified at the end of December.

The winner was the Sairoun, or Forwards, alliance, the political arm of the movement led by prominent Shiite Muslim cleric Muqtada al-Sadr, who caused controversy recently by proposing a law further criminalizing Iraqi relations with Israel.

Since last year, the Sairoun party and al-Sadr have been trying to form a coalition with other Iraqi parties.

Previously, Iraqi political parties would usually align in coalitions according to the sector of the Iraqi population they ostensibly represented. There are three of these. Two are based on religion — Shiite Muslim and Sunni Muslim — and the last on ethnicity, Iraqi Kurdish. 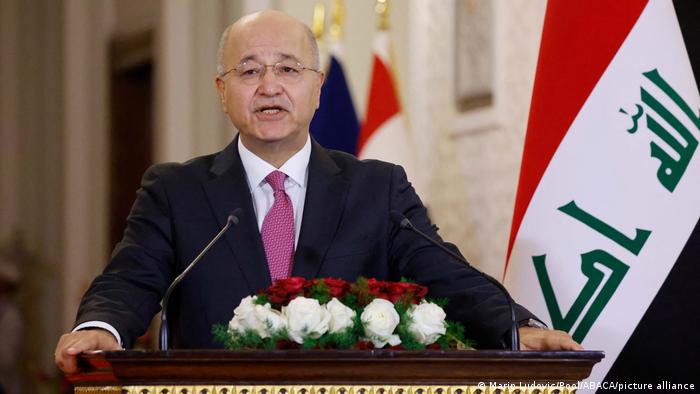 Iraqi President Barham Salih, an Iraqi Kurd, remains in power as part of the caretaker government

Since 2003, and the end of the Saddam Hussein dictatorship, the most powerful positions in government were usually agreed upon to ensure each major demographic had a role. For example, the Iraqi prime minister was Shiite, the speaker of parliament Sunni and the president Kurdish.

Originally the system was organized like this to avoid the different groups fighting one another. But it has since become a handicap, in that it prevents technocratic governance and disillusions voters, making them think that the same powers will always be in charge. Turnout at the October elections was the lowest ever.

Today, one of the things politicians are fighting over, and which is holding up government formation, is the installation of a majority government, with a genuine opposition in parliament. This would be in contrast to previous governments, where every party played a role and there was no real opposition.

So could this fight over a majority government — and the delay — actually be considered a good thing? Is it an indicator of progress in Iraq’s difficult democratic evolution? Supporters of the Fatah alliance, who only got 17 seats and previously had 48, protested election results

After all, despite the political deadlock, there’s been comparatively less violence. Back in January, the parties that lost the October election — the Fatah, or Conquest, alliance who are associated with Iraq’s established paramilitaries — seemed to be agitating for power despite their loss. They were thought to be behind attacks on competitors’ party offices and an assassination attempt on the prime minister. But since then, violence has mostly subsided.

Additionally Iraq’s highest court has recently issued several important decisions about the elections’ validity. These judgements appear to have been accepted by the politician-plaintiffs who complained.

There are negative and positive aspects to the current political gridlock, experts told DW.

The fight over a majority government could be seen as a potentially positive break from the past, said Fanar Haddad, an assistant professor at the University of Copenhagen and expert on Iraqi politics.

But the basic situation hasn’t changed, he told DW, and the political parties that have gun-toting militias backing them still have power. “One of the reasons they haven’t been able to form a government yet is precisely because of the power that is wielded by the other side,” Haddad argued. “I can’t see a fundamental change in the political economy of Iraq.”

What Haddad does consider new, and potentially positive in the long run, is the lack of foreign interference. In the past, two of Iraq’s major foreign allies — the US and Iran — have played a part in government formation.

“But there is no external broker imposing a deal at the moment,” Haddad said. “It’s hard to say for sure, but this could potentially have positive effects. Ideally, it would push the respective parties towards compromise.” 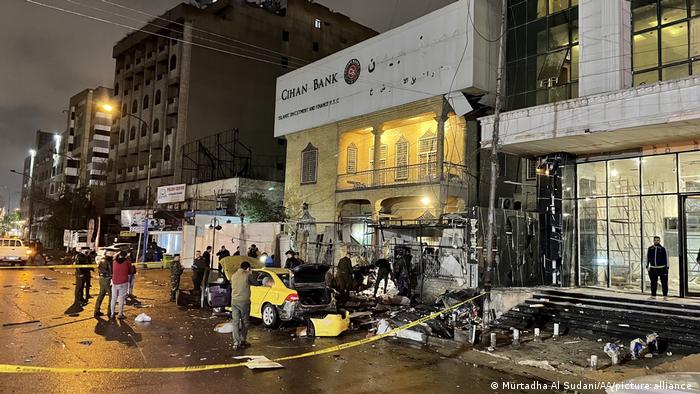 For Sajad Jiyad, an analyst based in Iraq and fellow with the Century Foundation think tank, the political deadlock is a bad sign.

“When it’s about maximizing political power for a sect or ethnicity, the parties unite against their opponents,” he explained. “But now the political battles are intra-sect and each party is competing with internal rivals. This makes it a fight for survival. So it becomes more cutthroat and more dangerous and makes the politics more difficult,” he noted.

Jiyad also believes the comparative lack of violence can be explained by the fact that the political deadlock provides “a point of stability.”

None of the groups “have any incentive to give anything up, or to increase the pressure,” he explained, noting that the potential for violence remains high if the situation changes again.

How will the deadlock end?

Hamzeh Hadad, a Baghdad-based analyst and visiting fellow with the European Council on Foreign Relations, suggested that the federal budget might be the thing that gets negotiations moving again.

In mid-May, Iraq’s Supreme Court clarified what a caretaker government, such as the one currently running the country, can and cannot do. One of those things is passing the bigger budget that politicians say is needed in Iraq to help with ongoing problems like unemployment and new worries like the food crisis and rising prices. 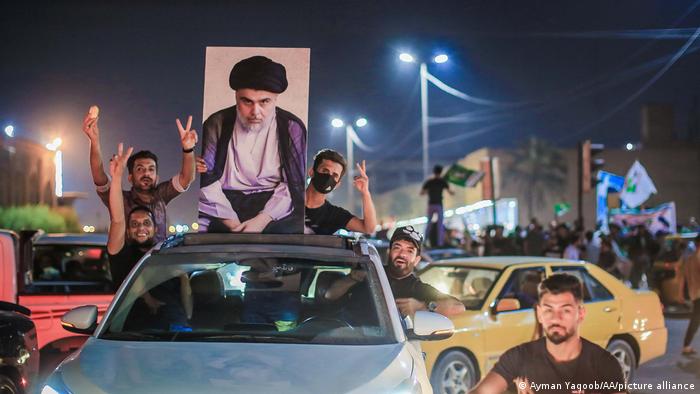 Cleric Muqtada al-Sadr (on poster), the de-facto leader of the Sairoun party, is insisting on a majority government

There may be ways for the caretaker government to get around this ruling, Hadad said. “But if they really run into trouble and we start seeing a lame duck Cabinet and prime minister, there might be the realization that, OK, it’s time to form a new government.”

All three experts that DW spoke with predict the current political deadlock is most likely to end in a compromise of some sort.

There have been calls for early elections but this brings too much uncertainty so none of the political actors want this, the Century Foundation’s Jiyad stated. “A compromise is most likely because then both sides can claim victory and that they stuck to their principles, and they won in some aspect,” he explained.

But is this democracy?

Whether all this means Iraq is more or less of a democracy remains debatable. Various political science monitors regularly assess the state of democracy around the world and one of them, Polity, now describes Iraq as a democracy. Others differ though, with Freedom House saying the country is “not free” and the Economist‘s annual Democracy Index classifying Iraq as “authoritarian.” 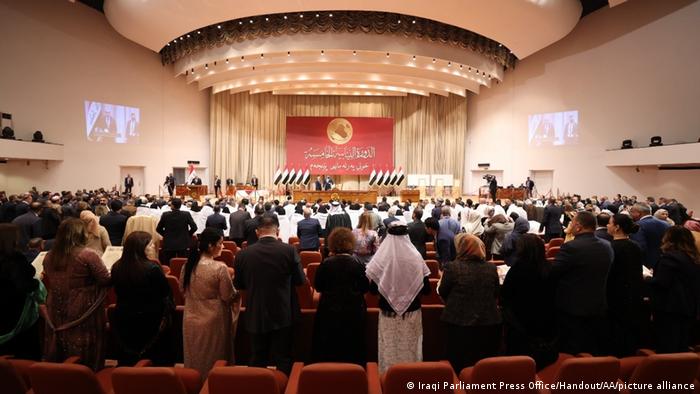 “I would have no hesitation in saying that Iraq is not a full democracy,” argued Haddad in Copenhagen.

There are too many factors that prevent democracy from flourishing, he said, including “the weakness of rule of law and the impunity with which the political classes and armed actors operate.”

The most democratic quality Iraq currently has is the fact it holds elections, he said. “But,” Haddad concluded, as the current political gridlock shows, “the vote plays so limited a role in dictating government policy or government formation that I think that also reduces Iraq’s eligibility to be called a democracy.”

New Discovery Reveals Why Uranus and Neptune Are Different Colors

seqWell and Element Biosciences partner to demonstrate sequencing performance of…