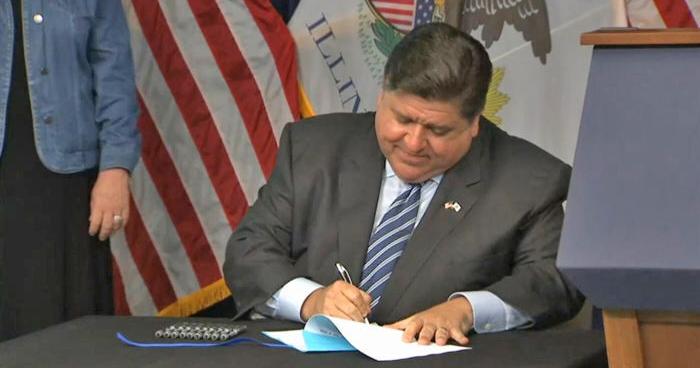 SPRINGFIELD — In the run-up to the early-morning April 9 adjournment of the spring legislative session, Illinois lawmakers passed a spate of public-safety measures backed by hundreds of millions of dollars in the $46 billion 2023 budget.

The package, pushed by Democrats in an election year in which rising crime has become a major campaign issue, ranged from minor statutory changes to a new legal definition of “organized retail crime,” an expansion of a state roadway camera program and the regulation of “ghost guns.”

While most of the bills were uncontroversial and broadly supported, the floor debate prior to the passage of several mirrored the rhetoric of an ongoing campaign season in which every constitutional office and seat in the General Assembly will be up for a vote in November.

Republicans accused Democrats of being soft on crime. State Rep. Justin Slaughter, D-Chicago, accused Republicans of a “bad stench of racism” in their ongoing criticisms of the Safety, Accountability, Fairness and Equity-Today Act, a controversial criminal-justice reform bill that passed the General Assembly in January 2021.

That measure was an initiative of the Illinois Legislative Black Caucus that included police certification changes, body-camera requirements, use-of-force reforms and other provisions including the elimination of cash bail in Illinois beginning in January 2023. It has been amended twice to address law-enforcement concerns in several areas.

“The bottom line is that you don’t deserve our respect,” Slaughter, who sponsored the bill in the House, told the GOP on the House floor last month. “Your dog-and-pony show is over, and we’re going to make you turn the page to a new chapter. A new and different era.”

“First and foremost, you have to give police officers the tools so that people feel safe, that we are addressing it and trying to reduce crime,” Martwick said in a phone interview. “But then we have to have a long game, which means investing into people and into opportunities for people so that they have quality, healthy and safe alternatives to entering the life of crime.”

Republicans took less of an issue with what was contained in the public-safety package than what was excluded.

“If you’re not going to put violent people behind bars and keep them there, you have accomplished nothing, no matter how much money you spend,” state Sen. Chapin Rose, R-Mahomet, said in a phone interview.

Rose had for months been backing a crime-response package full of sentence enhancements and mandatory minimums, such as a mandatory 10-year sentence for an offender’s first conviction for crimes such as violent gun offenses and carjacking, and life sentences for a second offense.

The GOP-backed measures, including a $100 million “Fund the Police Act,” failed to receive a committee vote in the Democrat-dominated Legislature, which has prioritized investment over incarceration.

Democratic action on the public-safety package this year, Rose said, was spurred by polling numbers and a 2021 Virginia election that saw Republican Glenn Youngkin unseat Democratic incumbent Gov. Terry McAullife in a major swing to the right compared to the state’s performance in the 2020 presidential election.

The Virginia election, Rose said, showed that the public was pushing back against a “defund the police” mentality demonstrated by Democrats nationwide. In Illinois, he said, that’s manifested in the criminal-justice reform law, which he credited for creating unfunded training and equipment mandates, which in turn create financial pressures on departments, especially in smaller communities.

The impending end of cash bail could also make it harder for state’s attorneys to hold accused dangerous criminals prior to trial, he said.

Gov. J.B. Pritzker has rejected the GOP rhetoric, pointing to prolonged disinvestment during the Rauner administration and touting spending increases in his administration.

“So there’s an awful lot here that supports both the addition of public-safety resources as well as making the system a safer one, a better one for anyone that ends up caught up in it,” Pritzker said at a news conference last month. “A lot of progress has been made in that regard, even though I know that Republicans want to turn this into an election-year issue. They’re just wrong. The Democrats have been standing up for public safety all along.”

No Republicans voted for the state operating budget, contained in House Bill 900, which passed 72-42 in the House and 34-19 in the Senate and included money for body-camera grants and other law-enforcement investments. That has led Democrats, including House Speaker Chris Welch, D-Hillside, to turn a frequent Republican argument on its head.

While Rose countered that he was skeptical the funds would be distributed equitably across the state and said spending won’t make a difference without the accountability measures, Democrats say their investments speak for themselves.

“Illinois has never seen an effort this robust to fight and solve crime,” Pritzker said the day the budget passed the General Assembly.

Can Donald Trump Get This 26-Year-Old Elected to Congress?