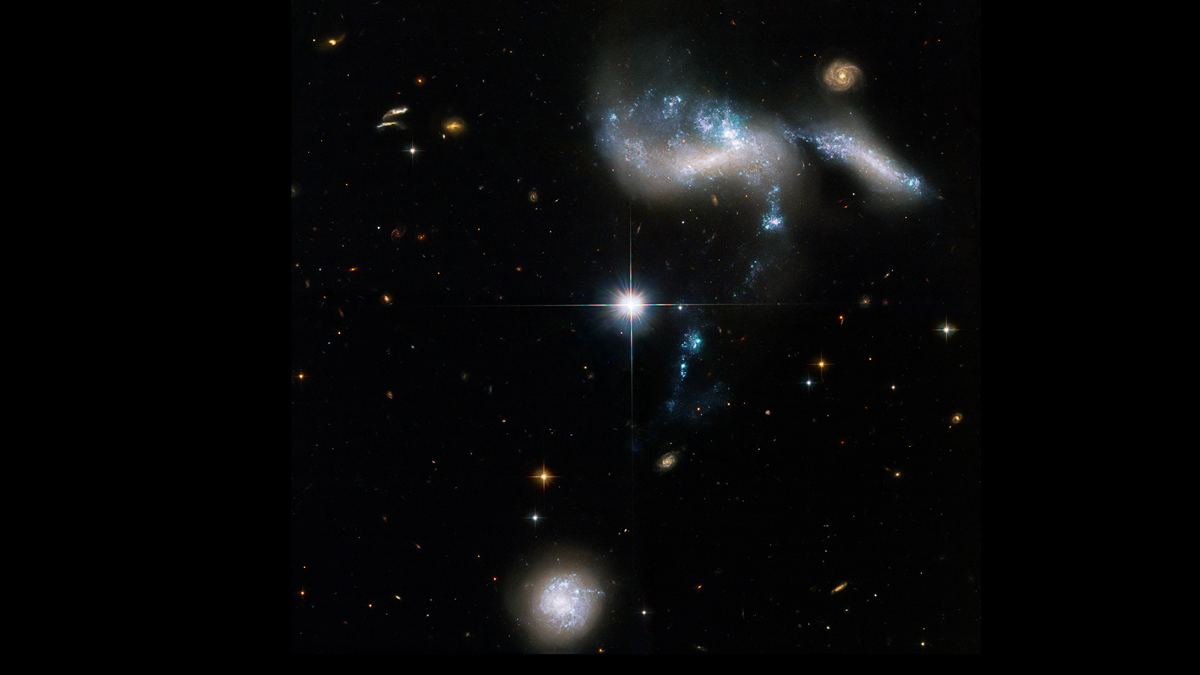 Stars from colliding galaxies flow together in a newly upgraded image from NASA’s venerable space telescope.

The Hubble Space Telescope has been hard at work for more than three decades, and scientists never lose their fascination with the observatory’s vast archives. Take, for example, this “river of star formation,” as NASA officials termed it in a statement released on Wednesday (May 17), takes place in an intersection of four dwarf galaxies within the Hickson Compact Group 31 (HCG 31) of galaxies.

The image was first released in 2010 and was re-envisioned to showcase star-forming regions. Blue in the image represents visible blue light, in which several hot, young blue stars are shining, particularly in a pair of colliding dwarf galaxies collectively called galaxy NGC 1741 (top-right of center). Red shows off light in the near-infrared.

Related: The best Hubble Space Telescope images of all time!

“Another dwarf, cigar-shaped galaxy to [NGC 1741]’s right joins their dance with a thin, blue stream of stars that connects the trio,” NASA said. A fourth member, HGC 31, is visible at bottom left. There’s also a bright star in the way of the quartet galaxies, which you can see in the center of the image.

Hubble has been imaging galaxies in high-detail for a generation, and numerous images released in recent weeks have focused on colliding galaxies. For example, in February the program released a pair of galaxies known as Arp 298, interacting 200 million light-years from Earth in the constellation Pegasus.

Arp 298 is also one of the first science targets of the new James Webb Space Telescope‘s observations starting in summer 2022, Hubble officials said at the time. The $10 billion observatory is in its final weeks of commissioning and can render sharp images in many configurations; it will soon be assessed in hotter and colder conditions and for closer solar system objects.

Hubble will assist Webb for a few years in the newer observatory’s major task, which is to understand the evolution of the universe. Galaxies that were formed near the beginning of the universe will be studied, to chart how that group was different than the galaxies of today.

One notable difference from the beginning of our universe’s history is the lack of heavier elements, and the relative abundance of hydrogen and helium. But charting the change of galaxies and shifts in dark matter, which cannot be sensed directly but seen through their influence on nearby objects, will be among Webb’s set of work.

Schumer, McConnell pressing administration to rush paperwork on Finland and…