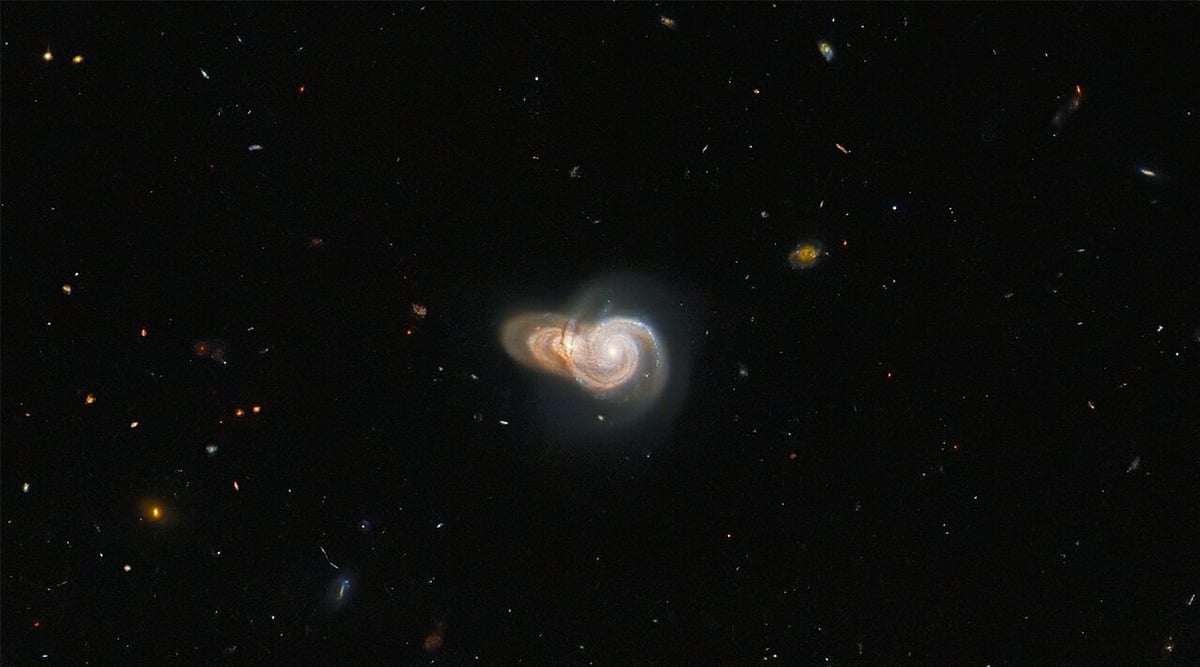 The Hubble Space Telescope has captured this beautiful image of two spiral galaxies seemingly overlapping in the sky. SDSS J115331 and LEDA 2073461, the two galaxies in the image, lie more than a billion light-years away from our planet.

Even though it looks like both the galaxies are colliding in the image, the two galaxies are not interacting and all and they just seem aligned from Hubble’s point of view. This image of two distant spiral galaxies seemingly overlapping was taken based on highlights from the space agency’s Galaxy Zoo project.

Established in 2007, the Galaxy Zoo projects is a massive citizen science project which crowdsources galaxy classifications from thousands of volunteers. These volunteers classify galaxies using images taken by robotic telescopes. They help scientists sort through the vst amounts of data generated by these telescopes.

The most astronomically intriguing objects selected through the Galaxy Zoo project are put through a public vote before Hubble makes follow-up observations. SDSS J115331 and LEDA 2073461 were such selected astronomical objects.

1/ This Hubble Picture of the Week shows two overlapping spiral galaxies 🌀: SDSS J115331 and LEDA 2073461. Their appearance gives the impression of a dramatic collision. But don’t be fooled! These two galaxies are not actually interacting – their alignment is just by chance. pic.twitter.com/zQyYOIkSU5

Since its inception, the project has contributed to over 100 peer-reviewed scientific articles and the classification of over 40 million galaxies. The success of the Galaxy Zoo project also inspired the Zooniverse portal, which hosts many such projects that use similar techniques to aid scientists across various fields in astronomy.

Each galaxy in the Galaxy Zoo project is identified by multiple participants since these multiple independent classifications can help scientists assess how reliable the results are. Scientists then use the classifications provided by the project to allocate valuable telescope time depending on the need of science projects.