Goose gives up politics for romance 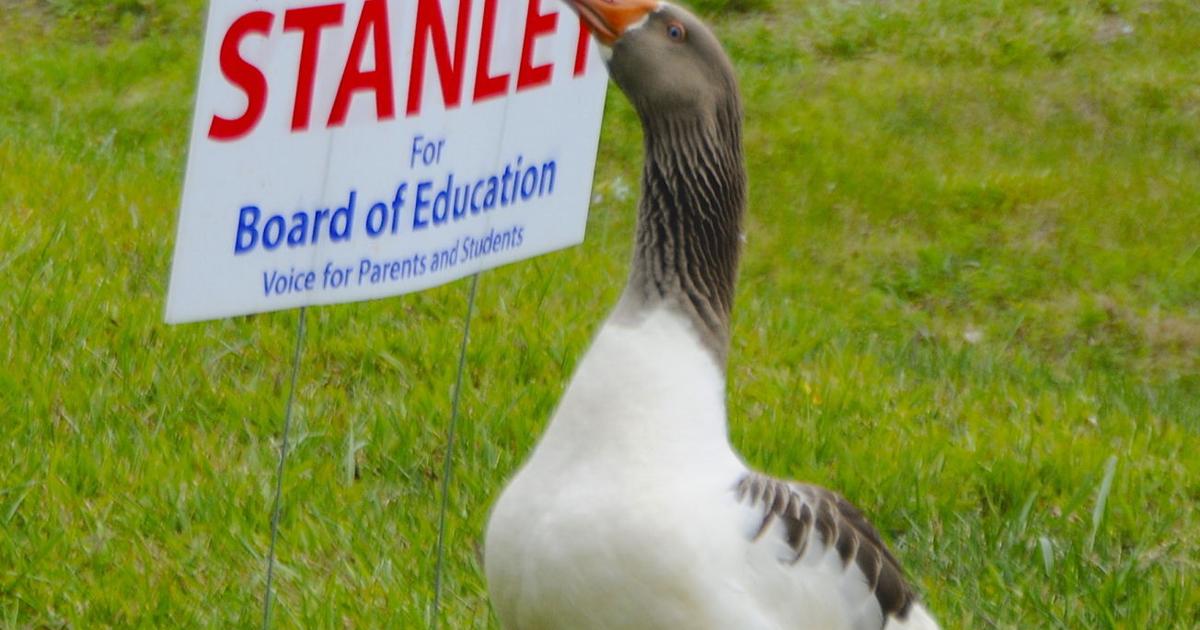 A goose named Molly has a new beau to occupy her interests instead of a political campaign sign along Airport Road near North Wilkesboro.

Motorists on Airport Road became accustomed to seeing Molly standing or lying near a “Tammy Stanley for Board of Education” yard sign along the southern end of that road each day for several weeks recently.

The goose sometimes was on the sign, pushing it flat to the ground. She was seen rubbing her head and neck against the sign.

Geese mate for life and Molly was paired with a gander named Max until six or seven months ago, when he was hit by a car on Airport Road and died.

Tammy Stanley put up the campaign sign in mid-March, by chance near where Max was hit. Stanley and others believe Molly’s behavior with the sign was tied to the loss of her mate.

Observers said Molly appeared to be protecting the sign. “We felt sorry for her,” said Stanley.

Molly first appeared on a nearby pond, which Stanley’s family owns, about two years ago.

“She had been staying around the pond” after the loss of Max. “After I put up the sign, she started staying there all the time except when she went back to the pond for water and to eat where we have a feeder” for geese, said Stanley.

Geese are known to show grief in various ways after losing a mate, plus ducklings and goslings sometimes bond with inanimate objects.

Molly’s apparent grief-related behavior with the political sign became a popular topic on social media. “Everybody said it would break her heart when we took down the sign,” said Stanley, who wasn’t successful in her first run for elected office.

Stanley said a woman who lives in Virginia and has Toulouse geese — the same breed as Molly — offered to sell a gander (male goose) as a potential new mate for Molly before the campaign sign was removed.

The gander was purchased and named Sully for the pilot who ditched a disabled airliner in the Hudson River without loss of lives in 2009.

There was no guarantee that the two geese would accept each other, but being the same breed improved the odds. They’re also about the same age.

Molly was in her pond when Sully was released there on the evening of April 24.

“We were kind of scared because we didn’t know how they would react…. As soon as we put him in, they (Molly and Sully) took off across the pond, just like a little love story,” said Stanley. “It was so sweet.”

Molly later led the way as the two went to the “Tammy Stanley for Board of Education” sign. They were both seen at the sign several times before it was taken down.

Stanley said the outpouring of sympathetic and supportive comments online regarding Molly has been remarkable.

Toulouse is a large breed of domestic geese named for a city in southwestern France with the same name, where it was developed in the mid-1500s.

The breed is known for having a good disposition, being good foragers and having an ability to withstand both cold and heat. Toulouse geese traditionally were raised for their meat.