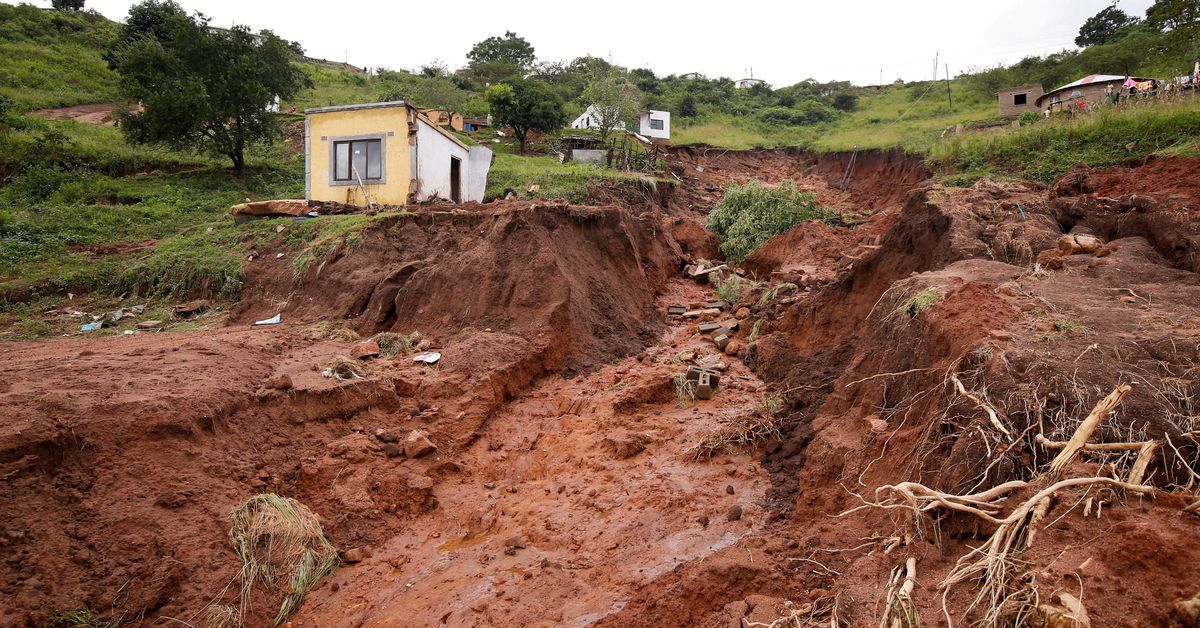 JOHANNESBURG, May 13 (Reuters) – Global warming made the heavy rains behind South Africa’s devastating floods last month twice as likely as they would have been if greenhouse gas emissions had never heated the planet, scientists said on Friday.

The World Weather Attribution group analysed weather data and digital simulations to compare today’s climate to that of before the industrial revolution in the late 1800s, when the world was about 1.2°C cooler.

“The results showed that an extreme rainfall episode such as this one can now be expected to happen about once every 20 years,” a report on the study said.

“Without human-caused global warming, such an event would only happen once every 40 years, so it has become about twice as common as a result of greenhouse gas emissions.”

It added that when extreme downpours do happen, they can be expected to be 4-8% heavier than if no human-induced global warming had occurred.

A general view of a mudslide which destroyed several houses during flooding in Mzinyathi near Durban, South Africa, April 17, 2022. REUTERS/Rogan Ward/File Photo

Attributing specific weather events to climate change is a tricky business that deals in probabilities, never certainty. But co-author Friederike Otto, from Imperial College London, said the study had examined data from the wider region, not just Durban.

“Looking at the larger region is actually a very meaningful way of assessing the impact of climate change. (The study) means that, in any given year, there is a 5% likelihood of such an event occurring,” she told a news conference, versus 2.5% in the absence of global warming.

Africa’s southeastern coast is on the front line of seaborne weather systems that climate change is making nastier, scientists say. South Africa’s tropical northern neighbour Mozambique has suffered multiple cyclones and floods in the past decade, including one in April that killed more than 50 people.

“The patterns we see in southern Africa are consistent with what we are seeing elsewhere in the world,” Jasper Knight, a geoscientist at Johannesburg’s University of Witwatersrand, not involved in the study, told Reuters.

“It confirms that climate change is real, it is happening right now and it’s impacting the most vulnerable.”