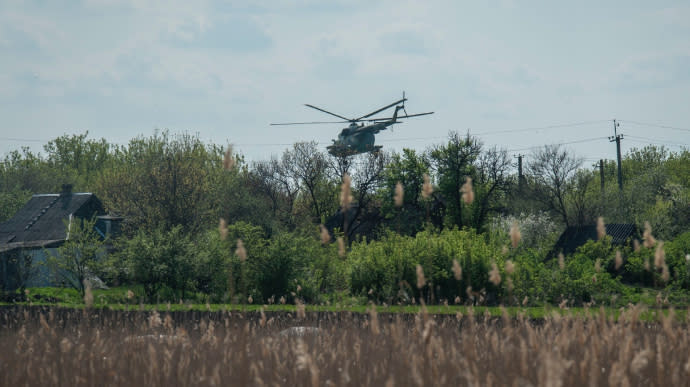 Russian occupying forces are conducting an active offensive in the Skhid [Eastern] Operational Zone in order to establish full control over Donetsk, Luhansk and Kherson Oblasts and to maintain the land corridor with temporarily occupied Crimea.

Source: morning summary of the General Staff of the Armed Forces of Ukraine on May 12

Details: On the Volyn, Polissia and Siversk fronts, certain units of the Armed Forces of the Republic of Belarus continue to carry out tasks to strengthen the Ukrainian-Belarusian border in Brest and Homel Oblasts. The threat of missile strikes from the territory of Belarus on the objects of our State remains.

At checkpoints and in the border areas of Briansk and Kursk Oblasts there are reinforced units of the FSB [Federal Security Service] Russian Federation border service, as well as units of the Armed Forces of the Russian Federation. In addition, the Russian occupiers carried out artillery shelling of settlements in the Horodnianskyi district of Chernihiv Oblast and launched an airstrike on a settlement in the Shostka district of Sumy Oblast.

On the Sloviansk front, occupying forces are regrouping in order to resume their offensive on Barvinkove and Slaviansk. The enemy moved a battalion tactical group in order to strengthen their frontline units.

In order to replenish units that have suffered casualties and provide logistical support to the group of troops, the enemy moved about 300 units of weapons and military equipment to the designated area.

On the Donetsk front, enemy units are trying to develop offensive operations in the direction of Lyman, Sievierodonetsk, Bakhmut, Avdiivka and Kurakhiv. The main task remains to establish full control over Rubizhne, capture Lyman and Sievierodonetsk.

On the Lyman front, the enemy crossed the Siverskyi Donets River to engage their main forces and mount an offensive. On the Siversk front, they are taking the offensive towards Zelena Dolyna and Novoselivka. Fighting continues.

In order to overcome the water barrier, the aggressor from the territory of the Russian Federation in the direction of Kreminna is employing amphibious pontoon bridging equipment.

On the Bakhmut front, the enemy is storming Pervomaisk and Komyshuvakha, and fighting continues.

On the Avdiivka front, the enemy is storming Novobakhmutivka and Novokalynove.

In Mariupol, the main efforts of the occupiers are focused on blockading and trying to destroy our units in the area of the Azovstal plant. The occupiers are still inflicting air strikes.

On the Zaporizhzhia front, the enemy fired at units of our troops with high-barreled artillery and rocket-propelled grenade launchers.

On the Pivdennyi Buh and Tavriia fronts, the enemy is trying to improve its tactical position.

On the Mykolaiv and Kryvyi Rih fronts, the enemy continues to fire artillery at our troops’ positions. In order to detect changes in the position of the Defense Forces, the enemy is conducting air reconnaissance, including the use of UAVs.

In addition, on the Mykolaiv front around Nova Kakhovka the enemy is preparing engineering divisions for directing pontoon-bridge crossings.

In the Tavriia front, Russian troops were replenished and demonstrated in order to restrain the actions of our troops.

The situation on the Bessarabia front has not changed significantly.

It is stated that Russian forces are suffering losses in other areas.