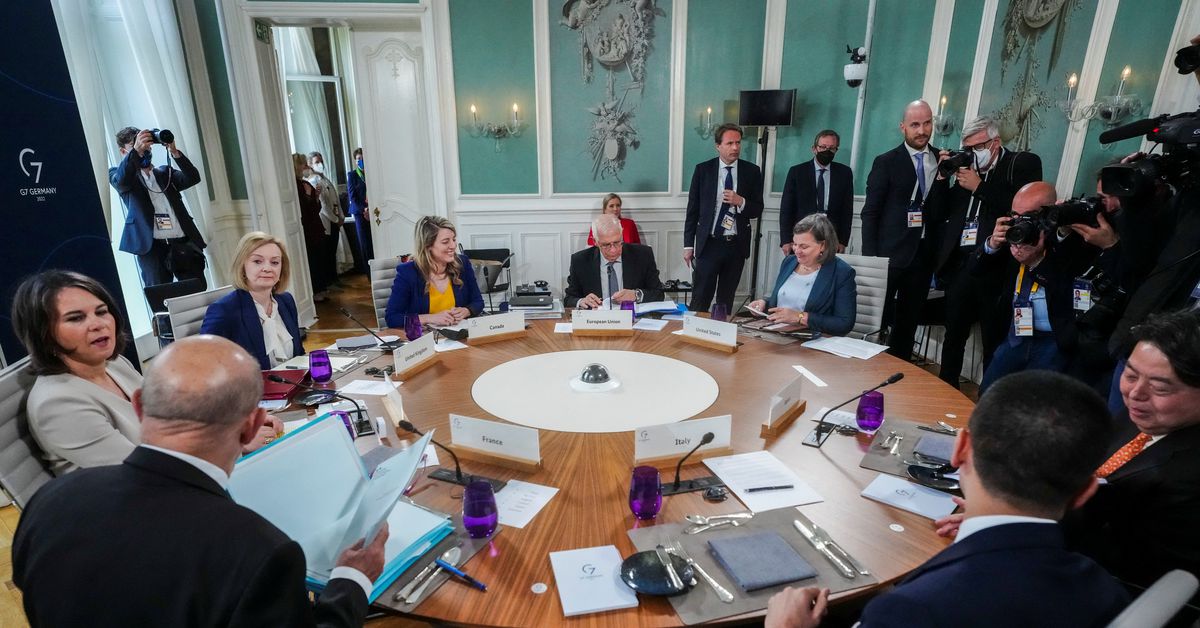 WEISSENHAUS, Germany May 14 (Reuters) – Group of Seven foreign ministers vowed on Saturday to reinforce Russia’s economic and political isolation, continue supplying weapons to Ukraine and tackle what Germany’s foreign minister described as a “wheat war” being waged by Moscow.

After meeting at a 400-year-old castle estate in the Baltic Sea resort of Weissenhaus, senior diplomats from Britain, Canada, Germany, France, Italy, Japan, the United States and the European Union also pledged to continue their military and defence assistance for “as long as necessary”.

They would also tackle what they called Russian misinformation aimed at blaming the West for food supply issues around the world due to economic sanctions on Moscow and urged China to not assist Moscow or justify Russia’s war, according to a joint statement.

“Have we done enough to mitigate the consequences of this war? It is not our war. It’s a war by the president of Russia, but we have global responsibility,” Germany’s Foreign Minister Annalena Baerbock told reporters at a closing news conference.

Key to putting more pressure on Russia is to ban or phase out buying Russian oil with EU member states expected next week to reach an agreement on the issue even if it remains at this stage opposed by Hungary.

“We will expedite our efforts to reduce and end reliance on Russian energy supplies and as quickly as possible, building on g7 commitments to phase out or ban imports of Russian coal and oil,” the statement said.

The ministers said they would add further sanctions on Russian elites, including economic actors, central government institutions and the military, which enable President Valdimir Putin “to lead his war of choice.”

The meeting in northern Germany, which the foreign ministers of Ukraine and Moldova attended, also spotlighted food security concerns and fears that the war in Ukraine could spill over into its smaller neighbour Moldova.

“People will be dying in Africa and the Middle East and we are faced with an urgent question: how can people be fed around the world? People are asking themselves what will happen if we don’t have the grain we need that we used to get from Russia and Ukraine,” Baerbock said.

She added that the G7 would work on finding logistical solutions to get vital commodities out of Ukraine storage before the next harvests.

Attention now turns to Berlin as ministers meet later on Saturday with Sweden and Finland gearing up to apply for membership of the transatlantic alliance, drawing threats of retaliation from Moscow and objections from NATO member Turkey. read more

“It is important that we have a consensus,” Canada’s Foreign Minister Melanie Joly told reporters when asked about Turkey possibly blocking their accession.

Putin calls the invasion a “special military operation” to disarm Ukraine and rid it of anti-Russian nationalism fomented by the West. Ukraine and its allies say Russia launched an unprovoked war.

“More of the same,” EU Foreign Policy chief Josep Borrell told reporters. “The one thing that is missing is pushing for a diplomatic engagement to get a ceasefire. It is missing because Vladimir Putin has been saying to everybody that he doesn’t want to stop the war.”

Listen to the Moment a Passenger Lands a Plane During…