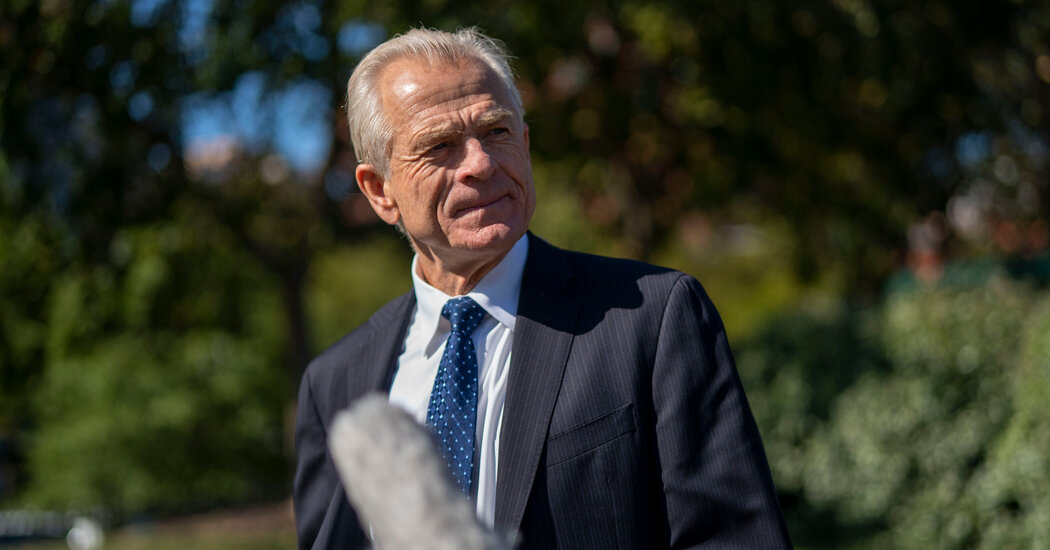 The House had recommended contempt charges against all three Trump White House aides over their stonewalling of its Jan. 6 inquiry.

A federal grand jury on Friday indicted Peter Navarro, a White House adviser to former President Donald J. Trump, for failing to comply with a subpoena from the House committee investigating the Capitol attack, even as the Justice Department declined to charge Mark Meadows and Dan Scavino Jr., two other top officials who have also refused to cooperate.

The indictment against Mr. Navarro, handed up in Federal District Court in Washington, marked the first time that an official who served in Mr. Trump’s White House during the events of Jan. 6, 2021, has been charged in connection with the investigation into the attack.

Prosecutors charged Mr. Navarro, 72, with what amounted to a misdemeanor process crime for having failed to appear for a deposition or provide documents to congressional investigators in response to a subpoena issued by the House committee on Feb. 9. The indictment includes two counts of criminal contempt of Congress that each carry a maximum sentence of a year in prison, as well as a fine of up to $100,000.

The Justice Department has declined to take similar steps against Mr. Meadows, Mr. Trump’s final chief of staff, and Mr. Scavino, the deputy chief of staff, according to people familiar with prosecutors’ decision and a letter reviewed by The New York Times informing the top House counsel of it.

“Based on the individual facts and circumstances of their alleged contempt, my office will not be initiating prosecutions for criminal contempt as requested in the referral against Messrs. Meadows and Scavino,” Matthew M. Graves, the U.S. attorney for the District of Columbia, wrote to Douglas N. Letter, the general counsel of the House, on Friday. “My office’s review of each of the contempt referrals arising from the Jan. 6 committee’s investigation is complete.”

Both Mr. Meadows and Mr. Scavino — who were deeply involved in the effort to overturn the 2020 election — engaged in weeks of negotiations with the committee’s lawyers, and Mr. Meadows turned over more than 9,000 documents to the panel, before the House voted to charge them with contempt.

By contrast, Mr. Navarro and his ally Stephen K. Bannon, who has also been charged with contempt, fought the committee’s subpoenas from Day 1 and never entered into negotiations.

A spokesman for the Justice Department did not immediately respond to a request for comment. A lawyer for Mr. Scavino declined to comment.

In a statement, the leaders of the committee applauded Mr. Navarro’s indictment but urged the Justice Department to provide “greater clarity” on its rationale for not charging Mr. Meadows or Mr. Scavino.

“We find the decision to reward Mark Meadows and Dan Scavino for their continued attack on the rule of law puzzling,” said the leaders, Representatives Bennie Thompson, Democrat of Mississippi, and Liz Cheney, Republican of Wyoming. “Mr. Meadows and Mr. Scavino unquestionably have relevant knowledge about President Trump’s role in the efforts to overturn the 2020 election and the events of Jan. 6.”

For his part, Mr. Navarro appeared in court on Friday afternoon, speaking on his own behalf and telling a federal magistrate judge that the congressional subpoena he was served with was “illegal” and “unenforceable.”

At the court hearing, he cast himself as a victim of an unfair system run by Democrats bent on destroying him and Mr. Trump.

“There are bigger things at play than whether I go to prison,” Mr. Navarro said. “And that’s why I’m standing here.”

He also complained that although he lives close to F.B.I. headquarters, federal agents arrested him at the door of an airplane as he was on his way to Nashville.

“This is not the way that America is supposed to function,” he went on, adding, “They’re playing hardball.”

A former White House trade adviser who undertook extensive efforts to keep Mr. Trump in office after the 2020 election, Mr. Navarro is the second high-ranking former presidential aide to be charged with contempt of Congress for defying a subpoena from the committee. Mr. Bannon, a former top aide to Mr. Trump, was indicted in November on similar charges.

The House voted in January to recommend that Mr. Meadows be charged with contempt.

“Upon receiving each referral, my office conducted a thorough investigation and analysis of the individualized facts and circumstances surrounding each contempt allegation to determine whether to initiate a criminal prosecution,” Mr. Graves wrote to Mr. Letter. “Those investigations and analyses were conducted by and supervised by experienced prosecutors. Each referral has been analyzed individually based on the facts and circumstances of the alleged contempt developed through my office’s investigation.”

The House subpoena that Mr. Navarro received sought documents and testimony about an effort to overturn the election that he had billed as the “Green Bay Sweep.” The plan called for lawmakers in key swing states to team with Republican members of Congress and Vice President Mike Pence to reject the results that showed Joseph R. Biden Jr. had won the election and give Mr. Trump the victory.

The subpoena also mentioned a call Mr. Navarro participated in with Mr. Trump and his lawyers on Jan. 2, 2021, in which they attempted to persuade hundreds of state lawmakers to join the effort.

Mr. Navarro also wrote a 36-page report claiming election fraud as part of what he called an “immaculate deception” that he said he made sure was distributed to Republican members of Congress.

There is no evidence of widespread fraud in the 2020 election, and the Jan. 6 committee has described the claims in Mr. Navarro’s report as having been “discredited in public reporting, by state officials and courts.”

The indictment comes days after Mr. Navarro filed a lawsuit against the House committee, Speaker Nancy Pelosi and the U.S. attorney for the District of Columbia, in which he questioned the authority and validity of the inquiry.

In the lawsuit, Mr. Navarro also revealed that he had recently received another subpoena, this one from a federal grand jury in Washington. That subpoena sought documents from him related to any communications he may have had with Mr. Trump or his lawyers.

Mr. Navarro has claimed that because Mr. Trump invoked executive privilege to bar the disclosure of information requested by the Jan. 6 investigators, he is prevented from complying with the subpoena. Prosecutors were most likely interested in how closely Mr. Navarro was in touch with the former president or his lawyers in order to assess that defense against the contempt of Congress charge.

“The executive privilege invoked by President Trump is not mine to waive,” Mr. Navarro has repeatedly said.

Mr. Bannon has also sought to argue that he does not have to comply with his own subpoena because of Mr. Trump’s claims of executive privilege. A trial in his case is tentatively scheduled for July.

Mr. Bannon is arguing that the committee is not a legitimate investigative body but a politically motivated one, citing the fact that two of its members have written books that presuppose who is to blame for the Capitol riot even though the inquiry has not ended.

While contempt of Congress charges are rarely brought, the cases filed against Mr. Navarro and Mr. Bannon suggest that the Justice Department is willing to take a tough stance against at least some of Mr. Trump’s former aides who have stonewalled the committee’s efforts.

The decision not to charge Mr. Meadows and Mr. Scavino indicates that there are limits to that approach, particularly when it comes to top White House officials who could more plausibly argue that their communications with the president were privileged.

The charges against Mr. Navarro come at a politically sensitive moment: one week before the committee is poised to begin a series of high-profile hearings on its findings.

Mr. Navarro has taken an aggressive stance toward the committee, especially with regard to its Democratic members. In his lawsuit, he vowed payback against Democrats should Republicans retake the White House and Congress in 2024.

At his court hearing, Mr. Navarro expressed similar disdain for the legal proceeding.

A federal magistrate judge, Zia M. Faruqui, released him from custody with a standard set of conditions, mostly simple restrictions on Mr. Navarro’s travel privileges, noting that he understood the defendant was frustrated by them.

Mr. Navarro rejected the idea that he was frustrated.

“I am, let us say, disappointed in our republic,” he declared.

There May Be a Secret Reason Sheryl Sandberg Is Leaving…