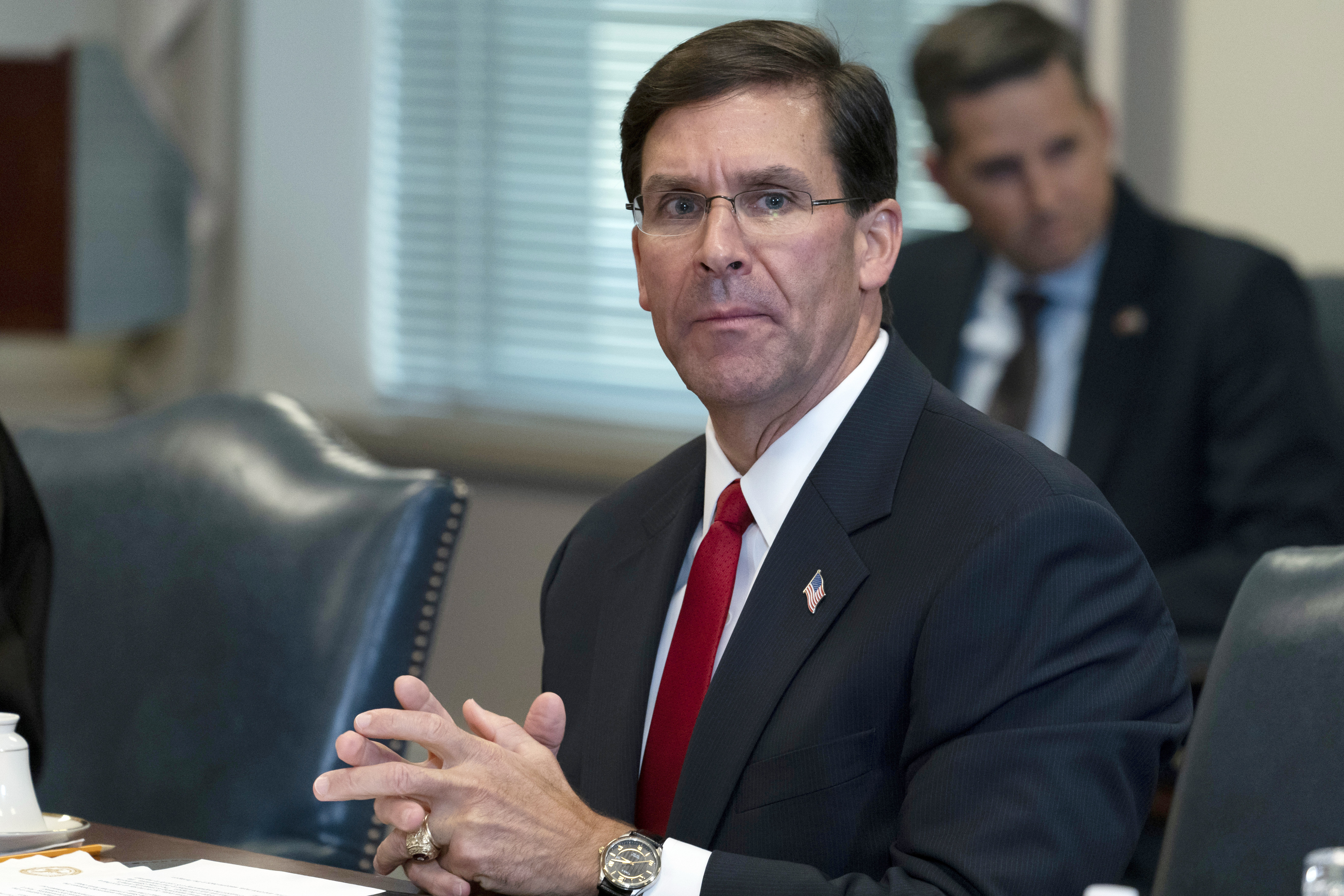 Former Defense officials — including Mark Esper, defense secretary in the Trump administration — emphasized 16 “core principles and best practices” for civilian and military professionals to live by amid what they said was an “exceptionally challenging” civil-military environment. | Alex Brandon/AP Photo

Eight former secretaries of Defense and five former chairs of the Joint Chiefs of Staff on Tuesday penned an open letter on best practices for “healthy” civil-military relations amid what they called today’s “extremely adverse” political environment.

The former officials — including Mark Esper, defense secretary in the Trump administration — emphasized in the letter 16 “core principles and best practices” for civilian and military professionals to live by amid what they said was an “exceptionally challenging” civil-military environment. They specifically cited political polarization caused by the disruption of the peaceful transition of power after the 2020 election — when former President Donald Trump refused to concede his loss to President Joe Biden, and a mob of his supporters subsequently stormed the Capitol to stop certification of the election results.

In the weeks following Trump’s election loss, the former president’s allies pushed for him to invoke the Insurrection Act — an 1807 law invoked only in the most violent circumstances that allows the president to deploy troops to suppress domestic uprisings — to keep him in office. Revealed in a never-issued executive order last winter, Trump in December 2020 had also considered directing his Defense secretary to seize voting machines and appointing a special counsel to investigate the election.

The pleas from Trump supporters to invoke military action to keep Trump in power further exacerbated concerns about the military becoming a partisan instrument for the former president, who had during his presidency taken advantage of a loophole to install loyalists in acting senior roles at the Pentagon.

The former Defense Department leaders also cited geopolitical tensions, such as the winding down of the Iraq and Afghanistan wars, and social tensions such as the Covid pandemic and economic uncertainty.

“Looking ahead, all of these factors could well get worse before they get better. In such an environment, it is helpful to review the core principles and best practices by which civilian and military professionals have conducted healthy American civil-military relations in the past — and can continue to do so, if vigilant and mindful,” they wrote in the letter.

The former officials in the last core principle listed refer directly to the transition of power during presidential elections and constitutional obligations of the military. They cite the two obligations of the military — to assist the current commander-in-chief “in the exercise of his or her constitutional duty to preserve, protect, and defend the Constitution of the United States,” and to prepare for whomever voters choose as the next commander-in-chief.

They also encouraged “mutual trust” between civilian and military leaders to help overcome “friction.” They define this as having trust that civilian leaders “will rigorously explore alternatives that are best for the country regardless of the implications for partisan politics” and that military leaders will “faithfully implement directives that run counter to their professional military preference.”

“Civil-military teams build up that reservoir of trust in their day-to-day interactions and draw upon it during times of crisis,” they wrote.

The former officials also outlined the limits of military personnel having a public role in partisan politics, saying that “military and civilian leaders must be diligent about keeping the military separate from partisan political activity.”

Trump during his presidency had blurred the lines between the military and partisan politics, such as when he hosted a Fourth of July parade in 2019 that prominently featured the military in a large display of troops, tanks, helicopters and fighter jets — to the dismay of former military leaders.

Biden also recently got pushback for his own blurring of military and political lines when he was flanked by two U.S. marines during an address to the nation in Philadelphia last week. The inclusion of military personnel as Biden gave a political speech about the future of the nation’s democracy raised questions about the politicization of the armed forces in recent years.

Peter Feaver, a political science and public policy professor at Duke University who helped the former officials draft the letter, told POLITICO that the missive was the result of an interest by Dempsey in laying out for the public what good civilian-military relations and effective civilian control should look like. Dempsey and Feaver decided the best people to send that message would be former Defense secretaries and Joint Chiefs chairs rather than the current officials — Secretary Lloyd Austin and Gen. Mark Milley — as the former officials can more easily speak on these matters without repercussion.

Feaver said there was rapid consensus from the former officials on the importance of writing the letter. He added that the process of putting it together was lengthy, as the officials didn’t want to “misstate something or come across as partisan.”

“In this polarized environment you hear people making comments about a civil war and questions about armed insurrections and things like that — well that’s now straying into military matters. And so a proper understanding of civilian control in that climate seems to be a little more urgent than earlier days that were less fraught and where a majority of folks could be ignorant on the topic and it didn’t matter,” Feaver said. “The letter is really responding to the prominence that civil military questions has taken in the political discourse.”