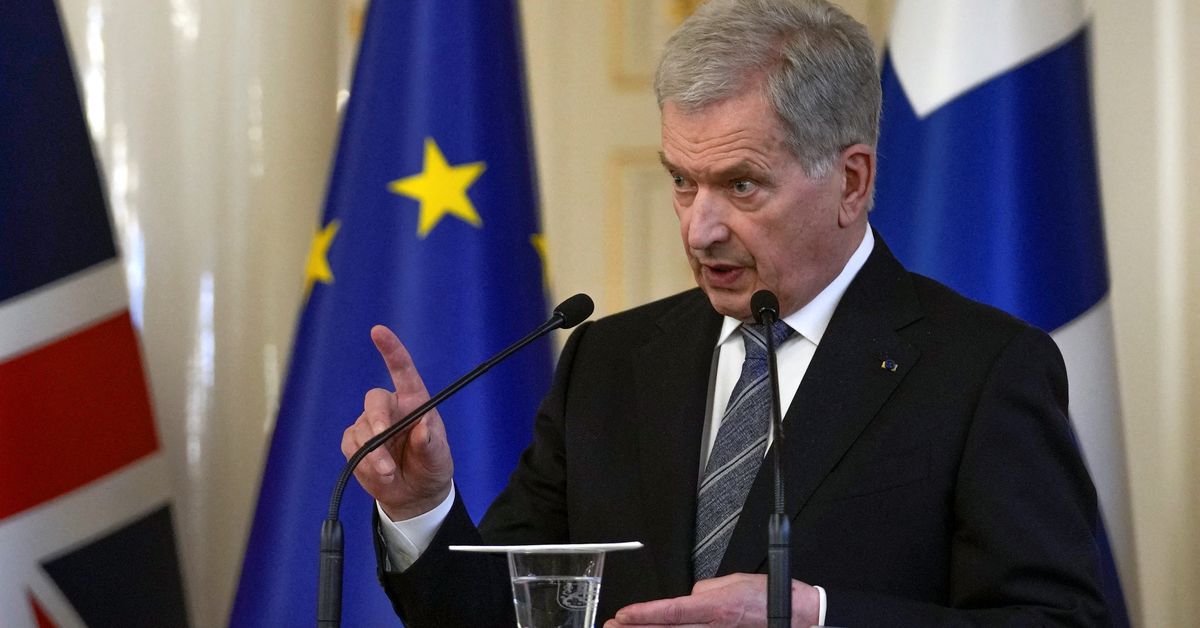 Finnish President Sauli Niinisto and British Prime Minister Boris Johnson (not pictured) hold a news conference, after signing a declaration between the UK and Finland to deepen their defence and security co-operation, amid Russia’s invasion of Ukraine, at the Presidential Palace, in Helsinki, Finland, May 11, 2022. Frank Augstein/Pool via REUTERS

HELSINKI, May 12 (Reuters) – President Sauli Niinisto is expected to give a greenlight on Thursday for Finland to join the NATO military alliance, in a major shift of security policy in the wake of Russia’s invasion of Ukraine.

Finland, which shares a 1,300 km (810 mile) border and a difficult past with Russia, has gradually stepped up its cooperation with the North Atlantic Treaty Organization as a partner since Russia annexed Crimea in 2014.

But it has refrained from joining in order to maintain friendly relations with its eastern neighbour. read more

Niinisto leads Finland’s foreign policy in cooperation with the government under the constitution and therefore his stance is considered decisive for the application. The government and parliament are also expected to give their approvals for the decision shortly.

“My message is clear: Finland will ensure its security. That is not to anyone’s detriment,” Niinisto said last week after meeting with the parliament’s defence committee.

In an interview with Finnish newspaper Ilta-Sanomat last month, he said: “If it happens as it looks likely that Finland and Sweden will join (NATO), then it will create a new kind of North for us, one that is responsible, stable and strong,” Niinisto said.

The view among Finns on NATO has changed rapidly after Russia initiated what it calls a “special operation” in Ukraine.

Finnish public support for joining NATO has risen to record numbers over recent months, with the latest poll by public broadcaster YLE showing 76% of Finns in favour and only 12% against, while support for membership used to linger at only around 25% for years prior to the war in Ukraine.

While military non-alignment has long satisfied many Finns as a way of staying out of conflicts, Russia’s invasion of sovereign Ukraine has led an increasing number of Finns to view friendly relations with Russia as an empty phrase.

Ukraine’s fate has been particularly disturbing for Finland to watch as it fought two wars with Russia between 1939 and 1944, repelling an attempted invasion but losing around 10% of its territory in the subsequent peace agreement.

Finland’s rapid shift towards NATO is likely to pull along neighbouring Sweden.

Sweden’s ruling Social Democrats are expected to decide on May 15 whether to overturn decades of opposition to NATO membership, a move that would almost certainly lead to Sweden also asking to join the 30-nation alliance. read more

Russia has repeatedly warned both countries against joining the alliance. As recently as March 12 its foreign ministry said “there will be serious military and political consequences” if they do.

The speed of the Finnish decision to apply has come as a surprise to many, with most political discussions taking place behind the scenes out of fear over Russia’s reaction.

In March, Finland’s government had initiated a security policy review and delivered an updated report for parliament to discuss in April, while also holding direct parallel discussions with all parliamentary groups to secure backing for the decision to join the treaty.

In parallel with the domestic process, Finland’s President and prime minister have been touring NATO’s 30 existing member countries, visiting their foreign counterparts to secure backing for Finland’s membership.

“In my international discussions during this spring, I have received encouraging support for Finland’s solutions. These discussions will also continue,” Niinisto said in a statement.

NATO Secretary-General Jens Stoltenberg has previously said it would be possible to allow Finland and Sweden to join “quite quickly”.

Lifestyle upgrade: Smart home technology at your fingertips – The…