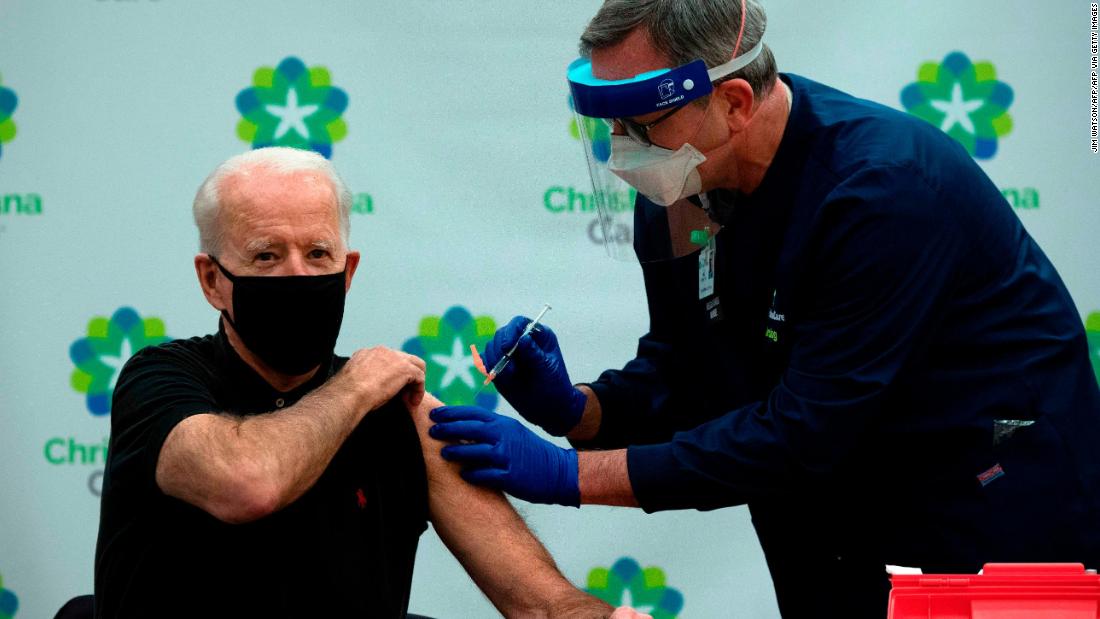 “When President Biden took office, millions were unemployed and there was no vaccine available,” the tweet said.
On Friday afternoon, about four hours after the publication of the initial version of this fact check, the White House acknowledged on Twitter that the Thursday tweet was inaccurate.
Facts First: It’s just not true that “there was no vaccine available” at the time Biden took office. About 3.5 million people were fully vaccinated against Covid-19 and about 19 million people had received at least one vaccine dose as of Biden’s inauguration day on January 20, 2021, according to statistics published by the US Centers for Disease Control and Prevention. The US was already administering an average of more than 1 million doses a day at the time. The first doses administered outside trials were given on December 14, 2020, while President Donald Trump was still in office. And Biden himself received his second dose nine days before he was sworn in.
Biden got the Pfizer/BioNTech vaccine, which obtained emergency use authorization from the US Food and Drug Administration under Trump on December 11, 2020. Moderna’s vaccine was authorized for emergency use on December 18, 2020.
The White House’s Friday correction reads as follows: “We previously misstated that vaccines were unavailable in January 2021. We should have said that they were not widely available. Vaccines became available shortly before the President came into office. Since then, he’s responsible for fully vaccinating over 200 million people.”
The White House is correct that vaccine availability was limited when Biden took office. It wasn’t until April 2021, about three months into Biden’s presidency, that all adults in every state were eligible for the vaccine. States’ early rollouts generally restricted the vaccine to health care personnel and other essential workers, residents of long-term care facilities, and seniors. At the time Biden was inaugurated, it was often difficult even for people in eligible groups to secure an appointment.
But saying “there was no vaccine available” at the time he took office, period, went too far — wrongly making it sound as if the whole vaccine rollout began under Biden.
And while this fact check is focused on the tweet’s claim about vaccine availability, it’s worth briefly addressing the economic claims in the initial tweet too.
Biden is free to tout the major decline in the unemployment rate during his tenure — it has fallen from 6.4 percent in January 2021 to 3.6 percent in April 2022 — but, as usual, the President’s role in the improvement is the subject of debate. And though the tweet said that “when President Biden took office, millions were unemployed,” there are still millions of people unemployed today despite the improved jobs situation. There were about 5.9 million unemployed people in April 2022, according to the US Bureau of Labor Statistics.

Biden has made more accurate claims

Biden himself has delivered more accurate claims about vaccination progress during his presidency. He has repeatedly said, including at least three times this month alone, that there were only 2 million people fully vaccinated at the time he took office compared to 220 million people fully vaccinated today.
Though the real number of fully vaccinated people at the time he took office was more than 3 million — Biden might have been relying on preliminary initial data that put the number around 2 million — Biden’s “2 million” figure is certainly much closer to the truth than the White House’s initial claim that “there was no vaccine available.”
Biden also said in an April 2021 speech that 8 percent of people over the age of 65 had received a shot at the time he took office. (He was noting that this figure had since increased to 75 percent.)
This story has been updated to include the White House’s correction of its initial claim.
Prev Post

Americans see total lunar eclipse for first time in a…

NASA astronaut floats on the space station with Earth in…