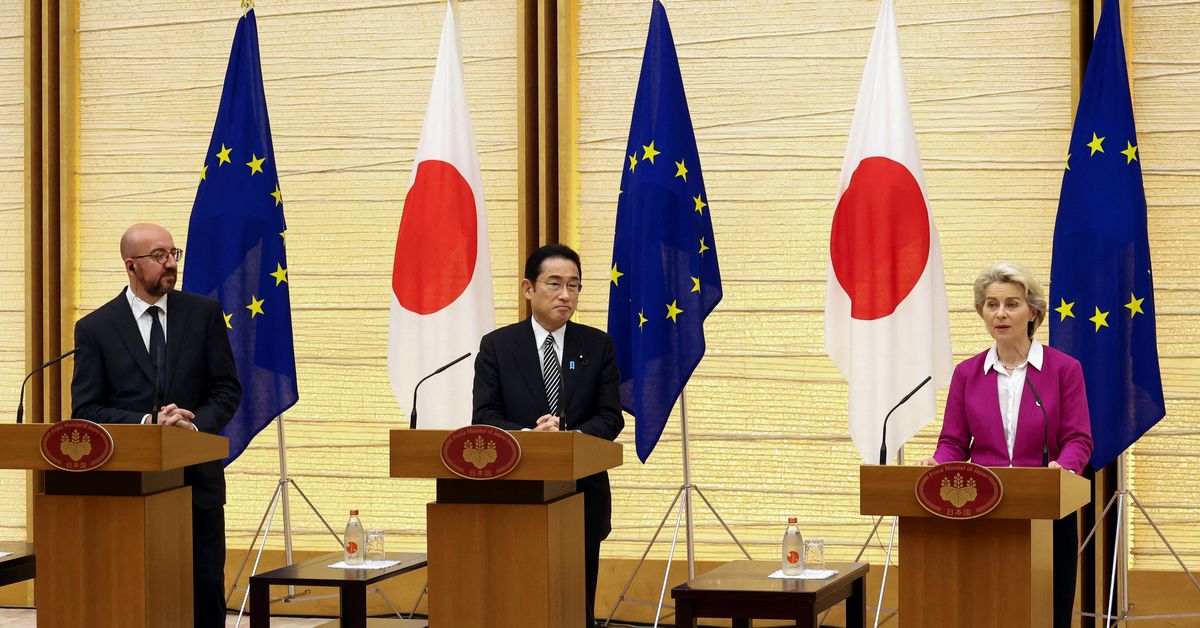 TOKYO, May 12 (Reuters) – European Union leaders said on Thursday that the EU wants to become a bigger actor in Asia, which they termed a “theatre of tensions”, warning of an increasingly assertive China even as they called on Beijing to defend the multilateral global order.

The trio said they would keep up talks on ways to maximise their partnership to tackle Russia over its invasion of Ukraine, in areas such as energy as well as aid, joining in a statement to call for the immediate cessation of hostilities.

But Michel and von der Leyen, in Japan for the latest in a series of annual talks, also said they were aware that regional tensions existed in Asia as well, and that the EU wanted – and needed – to take on a bigger role.

“The Indo-Pacific is a thriving region. It is also a theatre of tensions,” von der Leyen said. “Take the situation in the East and South China Sea and the constant threat of the DPRK (North Korea).”

“The European Union wants to take a more active role in the Indo-Pacific. We want to take more responsibility in a region that is so vital to our prosperity.”

Both warned of China’s close relationship with Russia, which calls its actions in Ukraine a “special military operation”, and condemned unilateral moves to change the status quo in any region of the world.

“Our cooperation in Ukraine is critical but it is also important in the Indo-Pacific, and we also want to deepen our consultation on a more assertive China,” Michel said. “We believe that China must stand up to defend the multilateral system that it has benefited from.”

The meeting came a day after China said that while a strong EU-Japan relationship was beneficial, it shouldn’t go too far.

“I also need to emphasize that the EU-Japan summit is a matter between themselves but they should not speak ill of China, let alone interfere in China’s internal affairs,” Chinese foreign ministry spokesperson Zhao Lijian said on Wednesday.

Both Michel and von der Leyen welcomed Japan’s participation in measures against Russia, including sanctions.

“We welcome the increasingly strong stance Japan is taking against Russia,” von der Leyen said at the start of their talks.

Tokyo has joined the European Union and Group of Seven nations in imposing trade sanctions on Russia, that have cramped Moscow’s ability to export its oil and gas.

But Japan is heavily reliant on energy imports, including purchases from Russia. Last week Kishida said Japan would “in principle” ban Russian oil but it has been more reluctant to disengage from some projects.

The three officials were meeting in the Japanese capital for an annual conference that was held online last year because of the coronavirus pandemic, a day after Finland Prime Minister Sanna Marin met with Kishida and just hours before Finland said it would apply to join NATO. read more

Von der Leyen will leave Japan on Thursday afternoon, while Michel will travel to the nuclear memorial city of Hiroshima, where he will offer flowers, and leave at the weekend.

“In light of the war in Ukraine, this will be an opportune time to send a powerful message of peace and of hope,” he said.

Distant ‘galaxy’ isn’t a galaxy at all — but one…