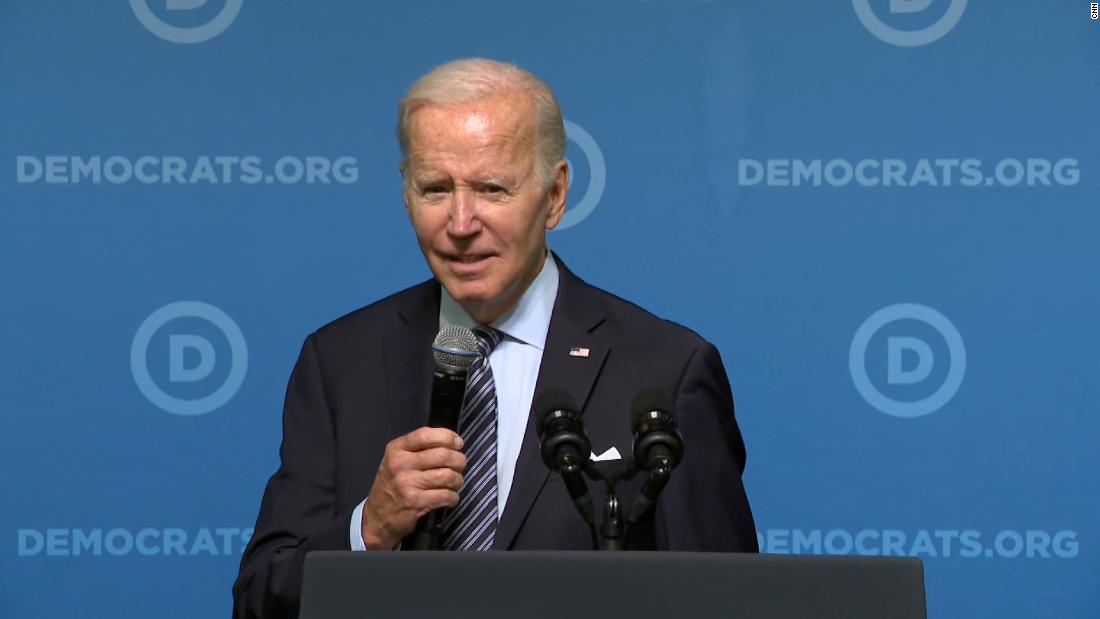 “We got a little help from Republicans — but not a lot — but enough to get it passed. But the truth is, there are a lot more Republicans taking credit for that bill than who actually voted for it,” Biden said at a Democratic National Committee reception in Maryland, another stop for the President as he picks up his campaigning less than two months ahead of the midterm elections.
“I see them out there, ‘And now we’re going to build this new bridge here, we’re all for it. And by the way, this new road, and we’re going to have an internet that going to be all the way,’ the President said, changing his tone of voice for his impression of the Republicans. “I love them, man. They ain’t got no shame.”
Biden did not name any Republican lawmakers in his speech, but a recent review by CNN’s “The Lead with Jake Tapper” found at least 14 congressional Republicans who voted against the bill have tried to take credit for projects made possible by it.
Iowa Democrat Liz Mathis, who is trying to unseat Republican Rep. Ashley Hinson, recently called out Hinson for claiming in a statement that she “helped lead a bipartisan group” to “prioritize funding for these essential upgrades” despite opposing the bill.
A spokesperson for Hinson said in a statement to CNN that the congresswoman opposed the infrastructure package “because it was tied to trillions of other spending in the House.”
“Since the bill was signed into law, this money was going to be spent regardless. If there’s federal money on the table she is, of course, going to do everything she can to make sure it is reinvested in Iowa. That’s why she worked with a bipartisan group of her colleagues in asking the U.S. Army Corps of Engineers to prioritize NESP construction along the Upper Mississippi River,” the spokesperson said.
Republican Rep. Tony Gonzales of Texas claimed in a post on his website in January that he secured $75 million for a creek restoration project in his district that came from the infrastructure bill despite voting against the bill. Gonzales had also said the infrastructure bill would “only make matters worse and hold our country back.”
Republican Sen. Rick Scott of Florida also voted against the bill but in January toured a new embankment in the Everglades and tried to take credit for “securing an unprecedented $1 billion for Everglades restoration, the largest single amount ever allocated by the federal government.”
CNN previously reached out to the lawmakers for comment.
The review by “The Lead” found other congressional Republicans who opposed the bill but have tried to take credit for it include: Rep. Gary Palmer of Alabama, Rep. Michelle Steel of California, Rep. Mariannette Miller-Meeks of Iowa, Rep. Steve Scalise of Louisiana, Rep. Clay Higgins of Louisiana, Rep. Garret Graves of Louisiana, Rep. Andy Harris of Maryland, Rep. Pete Stauber of Minnesota, Rep. Yvette Herrell of New Mexico, Rep. Kay Granger of Texas, Rep. Rob Wittman of Virginia and Rep. Ken Calvert of California.
The infrastructure law was a major bipartisan victory for the President and congressional Democrats, and 19 Republican senators and 13 House Republicans voted for the bill. The law invests $550 billion of new federal funding in America’s infrastructure over five years, including money for roads, bridges, mass transit, rail, airports, ports and waterways.
The President last year criticized Republican lawmakers who touted parts of the Covid-19 emergency relief law that benefit their constituents, saying, “Some people have no shame.”
Unlike the infrastructure law, no Republican in Congress voted for the American Rescue Plan. Biden noted in a speech in May that several Republicans were touting portions of the $1.9 trillion package that had gone toward their home districts. He did not name any of the Republicans in his speech but held up a piece of paper with names of lawmakers and the parts of the law they had promoted.
Prev Post