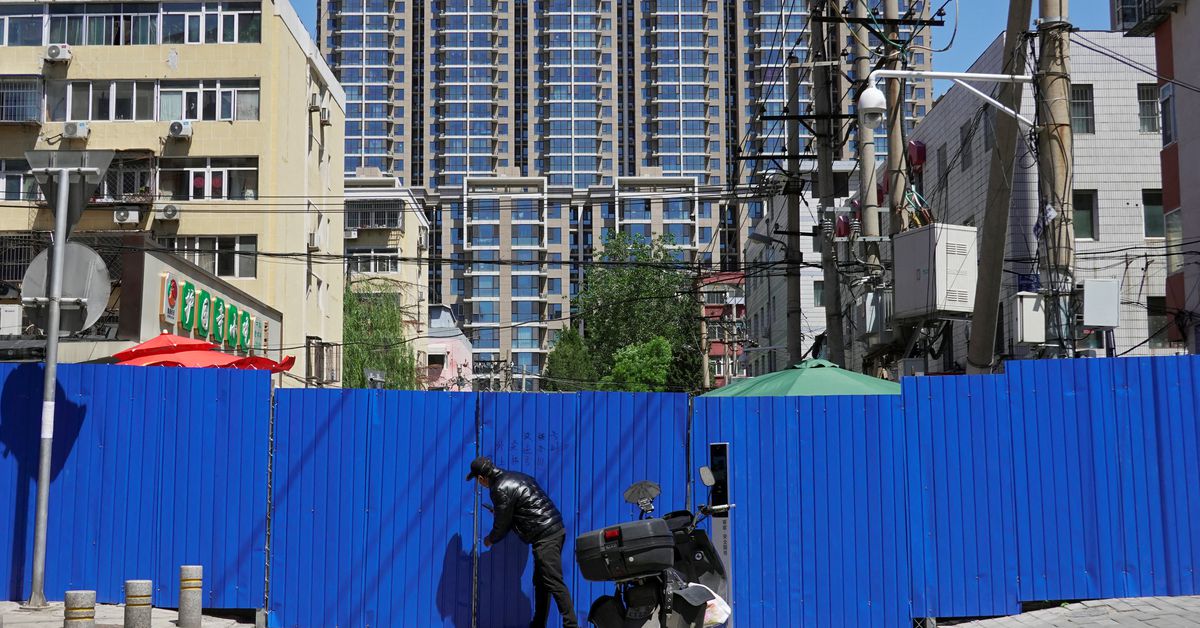 BEIJING/SHANGHAI, May 13 (Reuters) – Streets in China’s capital Beijing were quiet on Friday as residents heeded the advice of authorities to work from home to stop the spread of COVID-19, while officials in locked-down Shanghai said they aimed to defeat the virus this month.

Beijing officials late on Thursday denied rumours of sweeping, Shanghai-style lockdown measures, urging people not to panic-buy but to stay at home. They also announced a new round of mass testing across most of the city.

Most residents were more calm on Friday after rushing to supermarkets to stock up on food and other supplies the previous evening.

“I feel it’s not much different from how it’s been lately, just that it may be a little more extensive.”

Authorities in the capital had already banned dine-in services at restaurants, closed some malls, entertainment and tourist venues, suspended sections of the bus, subway and taxi systems and imposed lockdowns on some residential buildings.

COVID curbs have placed hundreds of millions of people in dozens of major cities under various degree of restriction, hurting consumption and manufacturing, and disrupting trade and global supply chains.

While travel curbs in much of the rest of the world are easing as countries try to “live with COVID”, China said on Thursday it would “strictly limit” unnecessary foreign travel by its citizens.

Most international flights to and from China have been cancelled over the past two years but the announcement by immigration authorities was the most clear sign yet that travel was not going to resume any time soon.

Chinese tourists and students had been a significant source of income for many economies around the world before COVID emerged in the city of Wuhan in late 2019.

China has firmly rejected criticism of its uncompromising “zero COVID” policy, saying saving lives is worth the huge short-term costs it incurs, and that activity would gradually resume once outbreaks are eradicated.

“Those who blame China’s dynamic zero-COVID strategy are short sighted,” the state-backed nationalist tabloid the Global Times said in an editorial.

“Some of them are just trying to smear, denigrate and undermine China. Whoever bets that China is at risk of a self-inflicted recession will suffer the consequences of their mistakes.”

Officials in Shanghai, which has endured six weeks of an almost complete lockdown, said economic activity was gradually resuming, with many factories operating in “closed loop” systems, with workers living on site.

More than 9,000 large-scale enterprises in Shanghai were now operating at close to 50% capacity, officials said.

Some economists expect China’s economic growth to slow sharply in the second quarter, or even shrink, endangering the target for growth for the year of about 5.5%.

China’s yuan traded at its weakest since September 2020.

Han Wenxiu, deputy head of the Communist Party’s office for financial and economic affairs, said on Thursday that China would not hesitate to introduce new policies to prop up growth. read more

The government has been cutting taxes for businesses and channelling more funds into infrastructure projects, while the central bank has been pumping more cash into the economy and increasing support for some sectors.

Beijing’s daily COVID caseload remained in the dozens, a fraction of Shanghai’s more than 2,000.

But almost all of Shanghai’s cases were in areas already under the tightest controls. The cases found in the relatively freer communities are the ones most closely watched for clues as to where Shanghai’s outbreak is heading.

The number of such cases rose to four on May 12, up from two the previous day. All four were in the Pudong district.

Shanghai’s deputy mayor, Wu Qing, told a news conference on Friday victory was getting closer but the fight against China’s biggest-ever COVID outbreak “still requires the joint exertions of every citizen”.

Last week, some of Shanghai’s residents were allowed outside their housing compounds for brief walks and grocery shopping but the city has in recent days been tightening curbs in a push to eradicate the virus this month.

More and more areas have entered what authorities call “silent management mode”, which typically means boards or fences around buildings, no deliveries and residents once again stuck indoors.

Once “zero COVID” is achieved at the community level, the city would start to steadily ease traffic restrictions and open shops, Wu said.

Relentless testing will still be needed to stay as COVID free as possible as it resumes normal life. Testing capacity has been ramped up to more than 8 million a day, with more than 5,700 testing stations in operation.

Reporting by Martin Quin Pollard, Ryan Woo and Wang Yifan in Beijing, David Stanway in Shanghai, and the Beijing and Shanghai bureaus; Writing by Marius Zaharia; Editing by Robert Birsel

Video shows Russian soldiers shooting Ukrainian civilians in the back