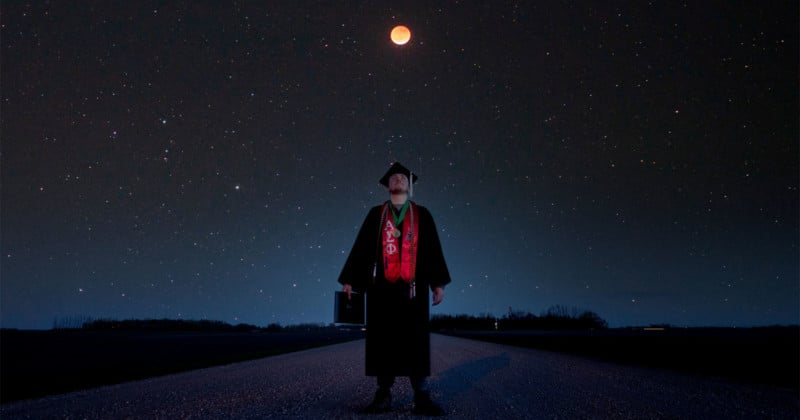 An astrophysics student captured a unique conclusion to his time in college thanks to a total lunar eclipse that occurred on the day of his graduation.

Vincent Ledvina realized that his graduation day would fall on the same date of the eclipse and saw the opportunity to marry his passion for astronomy and photography into one distinct photo.

Speaking to PetaPixel he explains how he used his Sony Alpha 7R II with a Tamron 35mm f/1.4 SP lens to take the spectacular shot.

“I took two photos, so I took one photo earlier in the night of myself in order to use a shorter shutter speed and lower ISO to ensure I was sharp — it’s hard for all the graduation regalia to stay still for a long exposure if it’s windy — and improve noise,” explains Ledvina.

“I kept my camera in the same place because I knew the eclipse would pass directly over the road, so when that happened, which ended up being right at the end of totality, I took the eclipse photo and blended them together in Photoshop. The edit only took about 10 minutes to do, and since the horizon was relatively simple, there wasn’t a whole lot of blending issues straight out of Photoshop that I had to fix.” 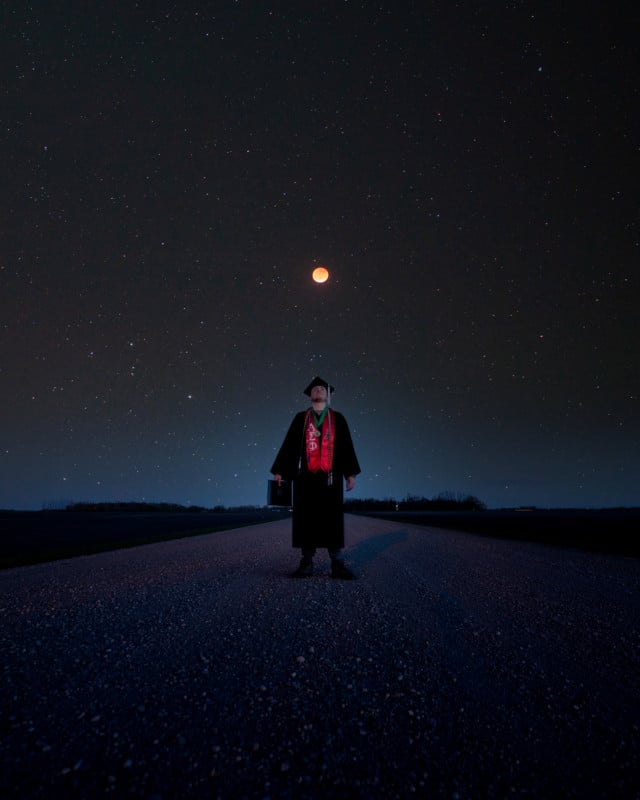 The most difficult task for the freshly qualified student, who received a B.S. in Astrophysics, was balancing the two exposures and trying to make everything look realistic.

“What many people have pointed out are the shadows that appear to extend towards the moon instead of away which is what you would expect. We were shooting close to a church that night that had some outdoor street lights turned on, creating unfortunate shadows, so the hardest part for me when editing was to try and make them less noticeable by darkening the foreground,” he says.

“Getting the exposure balanced was also very hard since the eclipse photo was exposed for the eclipse and therefore had very dark shadows. I spent most of my time trying to create balanced tones throughout the image.”

Ledvina plans on moving to Fairbanks, Alaska in September to finish a graduate certificate in space weather online at Millersville University. He will then attend graduate school in the fall of 2023 to pursue a Ph.D.

“I chose Fairbanks because I love the aurora and Alaska in general, and one of my top grad schools is the University of Alaska-Fairbanks.”

Ledvina says he is passionate about solar physics, space weather, and the aurora. Earlier this year, PetaPixel featured Ledvina’s 8K timelapse of the aurora lights over Alaska.

“I think more people need to be aware of space weather, and I think my degree and scientific passion dovetail so well into my hobby of taking pictures. Everything has culminated together so nicely, and I’m so excited to share what I’m doing.”

Stronger regulations for all facets of technology inevitable: Nadella

Exclusive: McConnell says he has directed Cornyn to engage with…