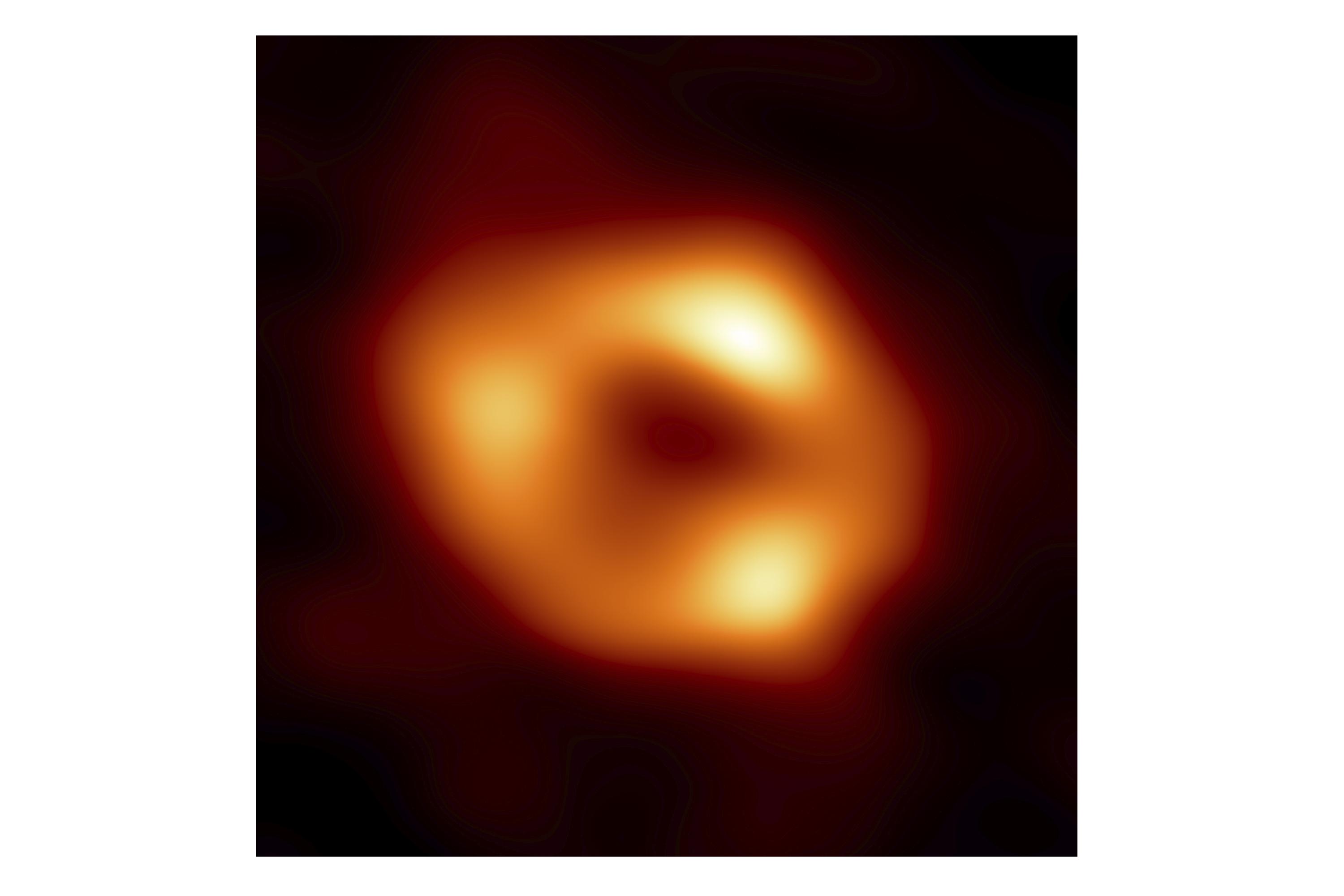 WASHINGTON (AP) — The world’s first image of the chaotic supermassive black hole at the center of our own Milky Way galaxy doesn’t portray a voracious cosmic destroyer but what astronomers Thursday called a “gentle giant” on a near-starvation diet.

Astronomers believe nearly all galaxies, including our own, have these giant black holes at their center, where light and matter cannot escape, making it extremely hard to get images of them. Light gets bent and twisted around by gravity as it gets sucked into the abyss along with superheated gas and dust.

The colorized image unveiled Thursday is from the international consortium behind the Event Horizon Telescope, a collection of eight synchronized radio telescopes around the world. Previous efforts to capture a good image found the black hole too jumpy.

“It burbled and gurgled as we looked at it,” the University of Arizona’s Feryal Ozel said.

She described it as a “gentle giant” while announcing the breakthrough along with other astronomers involved in the project. It also confirmed Albert Einstein’s general theory of relativity by being precisely the size that Einstein’s equations dictate. This one is about the size of the orbit of Mercury around our sun.

Black holes gobble up galactic material but Ozel said this one is “eating very little.” It’s the equivalent to a person eating a single grain of rice over millions of years, another astronomer said.

Scientists had expected the Milky Way’s black hole to be more violent, but “it turned out to be a gentler, more cooperative black hole than we had simulated,” Ozel said. “We love our black hole.”

“It is the cowardly lion of black holes,” said project scientist Geoffrey C. Bower of Taiwan’s Academia Sinica Institute of Astronomy and Astrophysics.

Because the black hole “is on a starvation diet” so little material is falling into the center, and that allows astronomers to gaze deeper, Bower said.

The Milky Way black hole is called Sagittarius A(asterisk), near the border of Sagittarius and Scorpius constellations. It is 4 million times more massive than our sun.

This is not the first black hole image. The same group released the first one in 2019 and it was from a galaxy 53 million light-years away that is 1,500 times bigger than the one in our galaxy. The Milky Way black hole is much closer, about 27,000 light-years away. A light year is 5.9 trillion miles (9.5 trillion kilometers).

To get the picture the eight telescopes had to coordinate so closely “in a process similar to everyone shaking hands with everyone else in the room,” said astronomer Vincent Fish of the Massachusetts Institute of Technology.

“What’s more cool than seeing the black hole at the center of our own Milky Way,” said California Institute of Technology’s Katherine Bouman.

The Associated Press Health and Science Department receives support from the Howard Hughes Medical Institute’s Department of Science Education. The AP is solely responsible for all content.

Supermassive black hole seen at the center of our galaxy