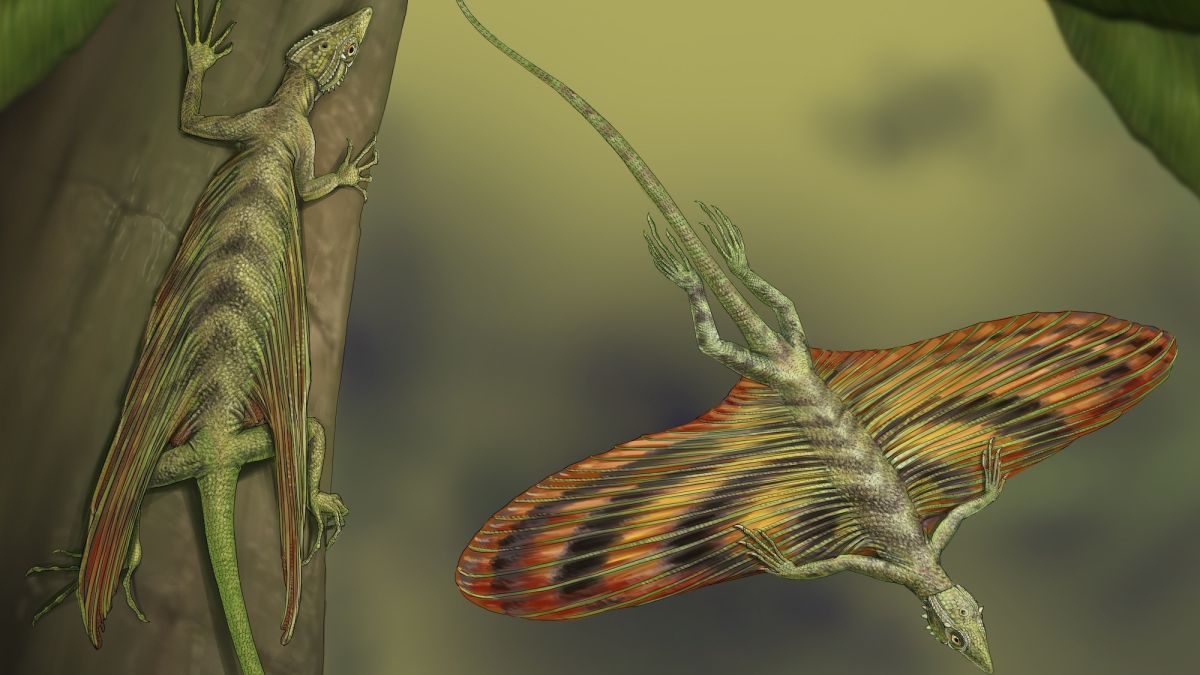 While most ancient reptiles crawled, scuttled and hopped through their prehistoric habitats, one stealthy creature opted for an airborne technique: gliding.

Tiny, “dragonlike” Coelurosauravus elivensis (see-luh-roh-SAW’-rah-vus eh-lih-VEN’-sis) used a pair of patagials — thin membranes that extended from its torso to its front limbs, forming a winglike structure to travel from treetop to treetop, according to a new study published online Friday (Sept. 9) in the Journal of Vertebrate Paleontology (opens in new tab).

Researchers from the French National Museum of Natural History in Paris are calling the critter “the world’s first gliding reptile,” according to a statement. Ever since the first fossils of the animal were discovered in 1907, paleontologists grappled with how this species — which measures roughly 4 inches (10 centimeters) in length, about the size of a human hand — evolved to glide through its forested habitat during the late Permian period (between 260 million and 252 million years ago). But now researchers think they have solved the mystery, using clues about the tree canopy in this unique reptile’s ancient ecosystem.

“The resulting picture is that of a forest where the trees are sufficiently closely spaced that the treetops overlap,” said lead study author Valentin Buffa, a paleontologist with the Center for Research in Paleontology and the French National Museum of Natural History. “This allowed animals to move around in the trees without needing to come down to the ground where the predators are,” and over time this could have driven the evolution of gliding adaptations, Buffa told Live Science in an email.

“C. elivensis was likely a great climber, able to move up and down tree trunks easily, and had the ability to jump and glide between branches and trees, saving it from having to come down to the ground even more,” he added.

The study authors deduced how the gliding reptile moved by reconstructing its skeleton, using fossils from three individuals that had been collected over the years across various locations. The most complete of these, a skeleton from Madagascar, was “sufficient to reconstruct nearly all of the skeleton (about 90%) for this species,” Buffa said.

Prior to this reconstruction, researchers were uncertain about the exact placement of the patagials on the animal’s body. In the new study, the authors proposed that the winglike structures were most likely located low on the trunk, extending from the gastralia — dermal bones located between the sternum and pelvis — or from the trunk’s musculature. The scientists determined this based on the position of the bones, as the patagials’ soft tissues were not preserved in any of the specimens.

Researchers also compared the proposed location of C. elivensis’ patagials to those of Draco, a genus of modern-day gliding lizards. Often called “flying dragons,” Draco lizards live predominantly in the rainforests of Southeast Asia. The scientists reported that C. elivensis “gliding apparatus sat lower on the abdomen than it does on modern gliding lizards,” according to the statement, and that Draco’s patagials are supported by its long and flexible ribs.

Modern Draco lizards are not closely related to the ancient C. elivensis, but the two likely evolved to have similar body types through convergent evolution, or when animals in similar environments independently develop similar traits.

For instance, like Draco, C. elivensis sported “sharp, curved claws” that enabled it to grip branches and tree trunks during its travels from tree to tree — and probably made it a more proficient glider, too.

“Based on known behavior of Draco, we suggest C. elivensis was able to flex its wrists backwards and interlock its finger claws between the scales on top of its wing,” Buffa explained. “This likely allowed it to extend the wing and keep it open even at higher speeds, as well as provide some degree of [pliability] by slightly moving the arms.”

What’s more, “the length and curvature of the patagials allow for the reconstruction of a very wide wing in C. elivensis,” he added. “That would have generated much lift while airborne, which likely allowed it to glide a significant distance.”

Elise Stefanik’s constituents disagree on what her ‘evolution’ means