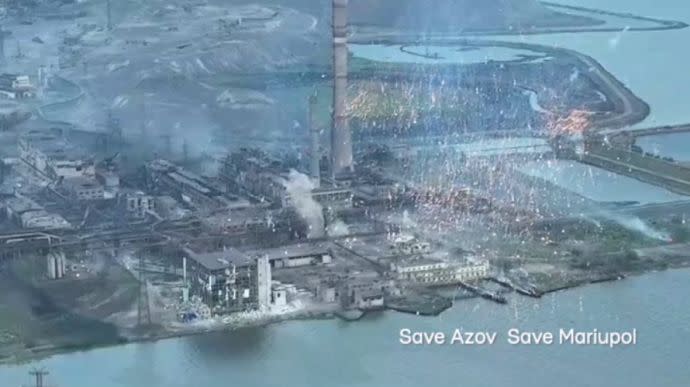 Petro Andriushchenko, Advisor to the Mayor of Mariupol, has reported that Russian troops have deployed either phosphorous or incendiary ammunition on Ukrainian soldiers defending the Azovstal steelworks in Mariupol.

Yesterday the occupiers deployed incendiary or phosphorous bombs against Mariupol Defenders for the first time (we will let experts determine the exact type of ammunition deployed).

The occupiers claim that they used 9M22C incendiary projectiles. Their burning temperature reaches 2,000-2,500ºC. They are almost impossible to put out.

Details: According to Andriushchenko, this was “hell on earth, at Azovstal.”

“It is incredible that our Defenders are still holding up. We owe them a debt we will never be able to repay,” he added.

President Volodymyr Zelenskyy of Ukraine said after Ukraine’s Eurovision victory that, “We will do everything we can to make sure that one day Mariupol will host Eurovision participants and spectators.”

Nearly 600 wounded soldiers remain in Azovstal bunkers without access to medicine and food and in unsanitary conditions. The Ukrainian government is trying to arrange the evacuation of at least 60 most seriously wounded soldiers.

Scientists Grow Plants in Moon Soil for the First Time

“Blood Moon” – What You Need To Know About the…